Taking A Look Back on @risingstargame Birthday Cakes and Utility

Don't overlook the potential of an NFT when there is a real utility; especially an immediate utility. You could spend 69 Million USD and still not find a use case for an NFT. Without such intrinsic value, it is harder to capture a price floor. This is why I have a preference towards game NFTs. I have been around @risingstargame for most of its existence and grabbed these Birthday Cakes during the times they first released. 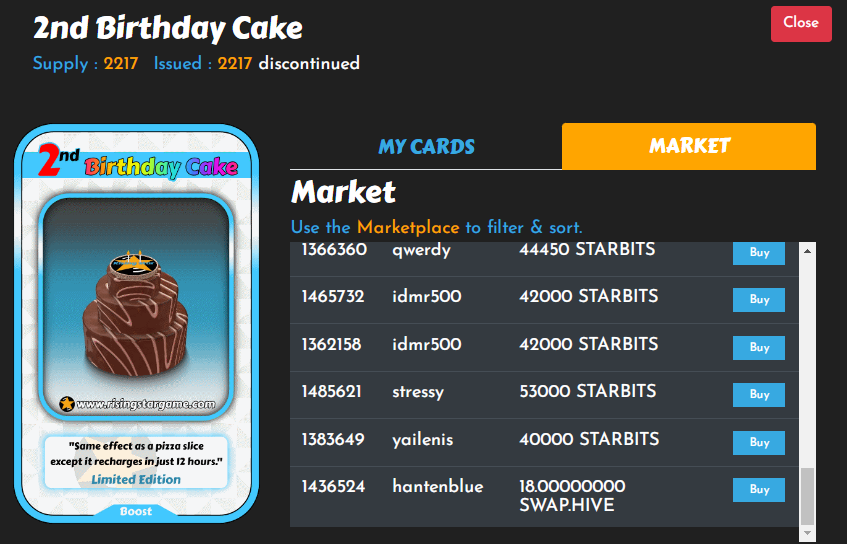 These NFTs cost 30,000 STARBITS and players have been smart enough to spend 66.51 Million STARBITS on creating 2217 2nd Birthday Cakes. Even at the lowest prices, it is a good value. Keep in mind that STARBITS are pseudo pegged to HIVE with a relatively stable value against HIVE. If you think HIVE will have a good time in the future, STARBITS are likely to have similar gains. I managed get five of these Cards. I only managed to get two 1st Birthday Cakes which were not sufficent for my daily Energy usage in @risingstargame That is one of the reasons I focused on getting as much as five 2nd Birthday Cakes. Since the price difference between the two Cards are based on rarity, it is smarter to invest in 2nd Birthday Cake at this point. At least that is my advice to those who are less into art based speculation.

I did not have 2nd Birthday Cake when I made the purchase. What I did have was EnergyBoost1 Card. It takes twice as much time to reset. When you consider the fact that you are not a robot to show up at the exact time, EnergyBoost1 becomes less than half as valuable as 2nd Birthday Cake. To make the matters worse, it is in abundant supply. If you are not looking to invest large amount due to any reason and still feel the need to be unconstrained by the Energy meter, getting this recharging pizza is a very good option. @risingstargame2 account is selling a large amount of EnergyBoost1 Card at 10,000 STARBITS price. That is roughly 3 HIVE in current market conditions. I suggest you do NOT speculate on the price of this Card. Birthday Cakes are a much better option for that. You can even choose to depend more or less on pure utility by choosing between 1st and 2nd Birthday!

The game can be found at https://www.risingstargame.com and it is possible to play the game on mobile through generating a special link. Not all in game actions are blockchain transactions. All the player owned assets involved are cryptocurrencies and NFTs.