Today's post topic is a bit different :p Finally, I managed to get myself out of splinterlands shell heh. Yesterday, again Ray shared about punks and he said he is minting punks on a hive. First I ignored it but city fella's chat about punks made me mint one punk. Tbh I still don't understand the real use-case or meaning of these NFT's for me they are just useless pictures but according to city fellas there are only 1000 punks and when they will get sold out they will be worth a million dollars :P XD. I didn't want to miss the train of million dollars so i jumped on to it and minted one punk. During hivefest, you could mint one punk in just 20 hives but after hivefest, it would be 25hive/mint. After a wait of several hours, I got my minted punk in my gallery and it was damn useless according to its rarity:(. 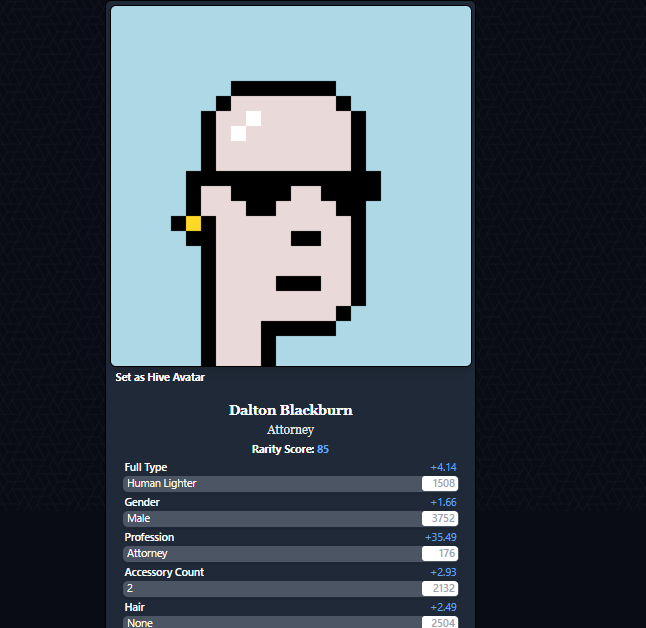 Ray told us that these punks might have some use case in future. We will see what would it be. I got this Dalton Blackburn who is bald and its rarity is just 85. I read in the city chat that 56% already sold out so only 46% left. After that, there won't be any punks on the hive and if we look at the craze of NFT's we can expect they will have some value. anyways i am not going to mint anymore. I am sticking with this one and if i am missing the train of million dollars then let it be :P XD. I hope you have minted at least one punk. If not, then you should for the sake of fun see ya take care.

Minted about 30 so far, most of them back to the market, two times close to rarity 500. Nice Nice. But haven't been able to sell any so far.

How does the rarity scale work. I haven't dug in. Lower the number better or ??? will keep these for some time

I got 2 and this was my second which started at 519 rarity, but seems it can go down as others get minted too. Would love to buy more, but Unless I sell this one, I will have to just keep this and my cheap one for now to be a part of it :D Wow Nice I will admit you are pretty lucky. I also purchased 2 and both have very low rarity :(

How can we earn this punks. Are we staking before we will earn it or we are investing to get it.

all punks are sold out i guess now starving artist :P cool at least your punk has rarity above 100 :P