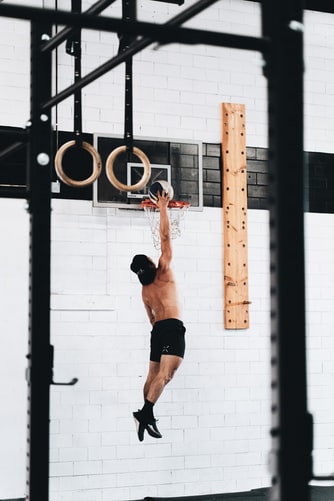 I have to confess that I thought Dunk is a generic name for a community without truly wandering about its meaning. Given the fact that I am interested in learning more about basketball, but I am no Basketball Pro, I didn't make the connection. The illumination came when I have seen there is an Anime series called ''Slam Dunk'', Anime series suggested by a Hive fellow.

It was something like...oh, dunk is more connected with basketball than I thought. So, I decided to search a bit on the Internet, and I realized what's the actual meaning of Dunk in basketball. So, I thought maybe there are other persons like me around here and it might be useful to unravel the ''Dunk'' meaning for them, and especially if English is not a well-known language for them.

So, DUNK stands for a basketball scoring technique in which a player puts the ball directly into the basket with one or both hands.

To be more clear--- so, instead of throwing the ball, the player can simply put it in the basket.

Here is a video where you can have an even better picture of it:

When creating the platform, we were originally going to be called "swish social" for the sound that a ball makes when it goes through the hoop cleanly, but decided on DUNK because of the iconic imagery that comes from some of the greatest dunks of all time. The Aaron Gordon thumbnail says it all there. A dunk in a basketball game gets the crowd on their feet and talking about the game; that's exactly what we want to see here!

That sounds great! Thank you very much for disclosing a bit of the DUNK idea when choosing the name for this community. It makes total sense.

Congratulations @maylenasland! You have completed the following achievement on the Hive blockchain and have been rewarded with new badge(s) :

Oh i really loved that anime, slamdunk!
It was both thrilling and hilarious.
The magical part is when they have conversations in the middle of a basketball 🏀 game that last for a half an hour while the whole game isn't a total of that Time 😂

Haha..cool. Japanese people always surprise me in a good sense with their ways of portraying things.