Tales of the Urban Explorer: The Bypass House

It took the best part of NINE months for me to visit 'The Bypass House'. I found it in the middle of 2020 and added it to my schedule on several occasions only to 'bypass' it (erm... sorry!).

What was bothering me was the access, which meant either climbing a gate next to someone's house or clambering down an embankment onto a busy bypass and scrambling through some woods. Bypass Meaning: - A road passing around a town or its centre to provide an alternative route for through traffic. Vehicles travelling on bypasses treat it like a Motorway and often travel at excessive speed.

On top of this, I had the incorrect impression that it was sealed. Had I watched the Goontubers’ video properly I would have realised the truth.

Finding this house was not easy. Said Goontuber gave me enough crumbs to give me the area and I had to search hard to get a pin. Was it all going to be worth it? 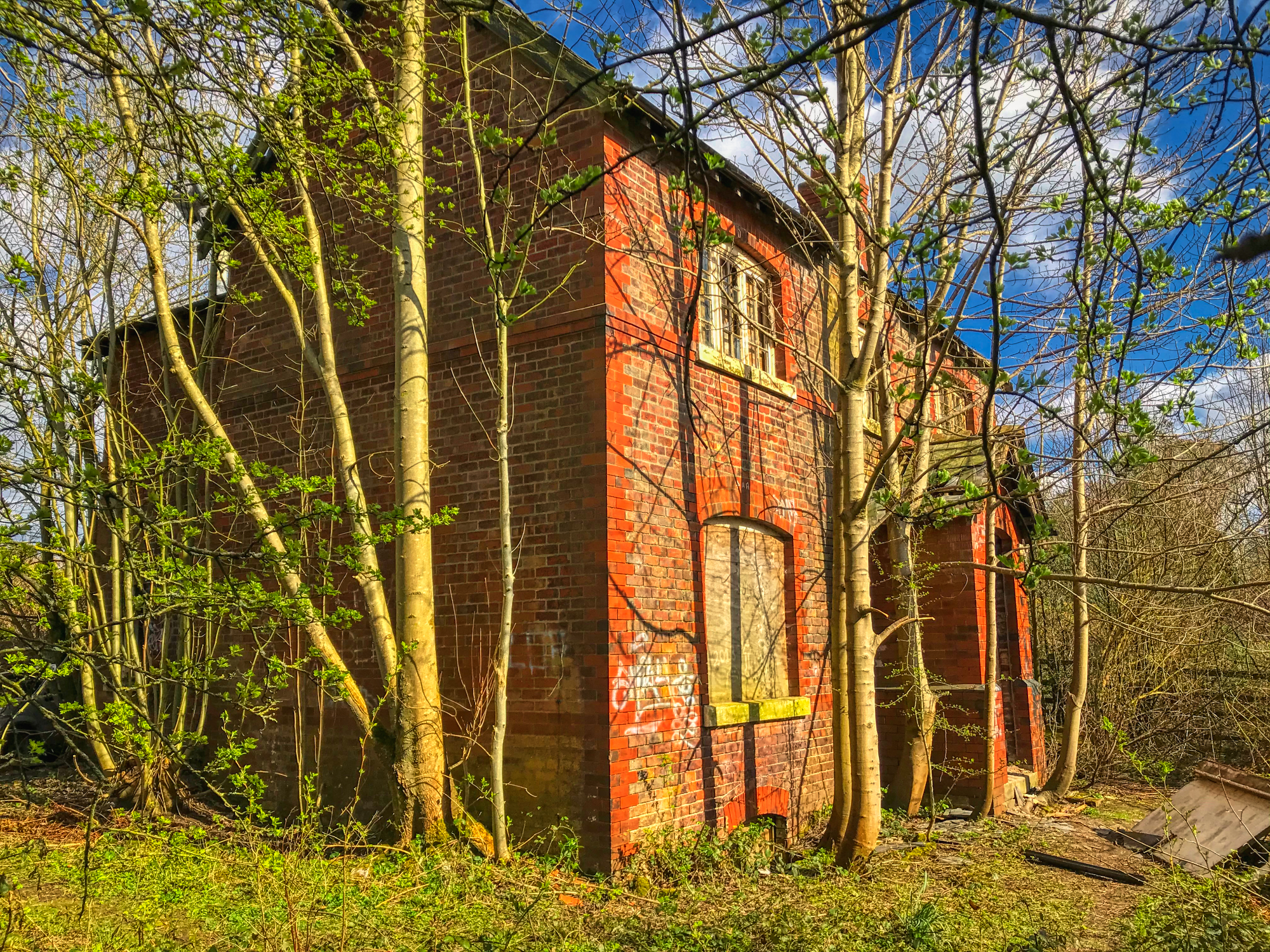 We opted for the embankment noticing a footpath next to the particular bypass. This was strange in itself as footpaths are generally non-existent on these fast stretches of road where the traffic is generally speeding along at 70-90mph.

It was not too busy on this day which was fortunate as we needed to get to the other side without getting squashed.

I was hoping no cops were going to come along as I have no doubts they would be stopping and giving us earache.

We crossed and after a 200-yard walk, scrambled into the trees thankfully out of sight of the motorists and looked upon the prize. The door had been yanked off its hinges to reveal a gaping hole. 'The Bypass House' was well out of the way of Urban life but I had a sinking feeling that inside was going to be a big yawnfest.

@anidiotexplores was inside faster than lightning with me in pursuit. 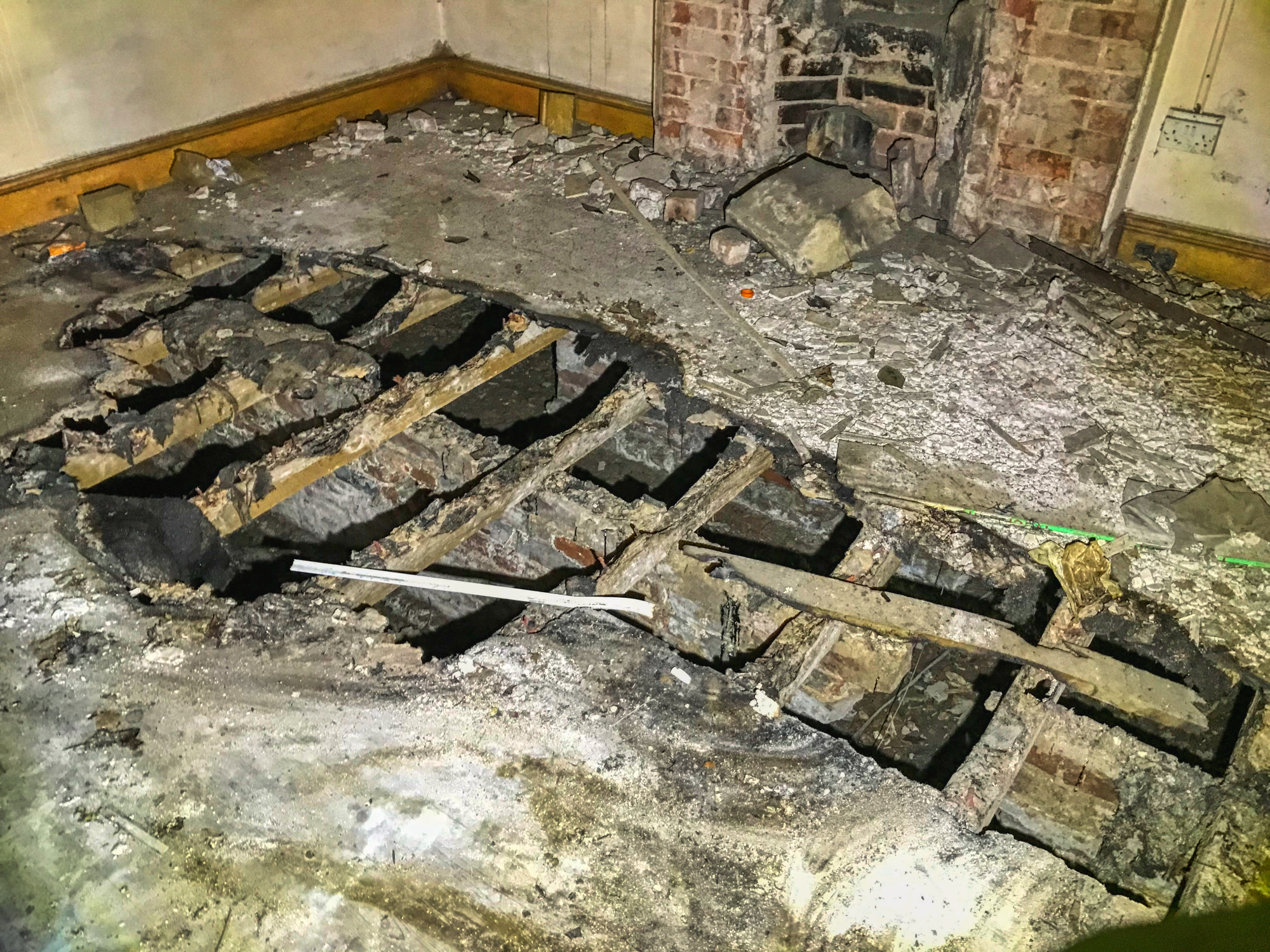 It was much cooler inside but not in terms of what we could see. I saw holey floors and some recent graffiti. I was surprised at the size, as from the outside ‘The Bypass House’ looked larger. When there’s barely anything to see and most of the doors have been ripped off their hinges it doesn’t take long to get around. 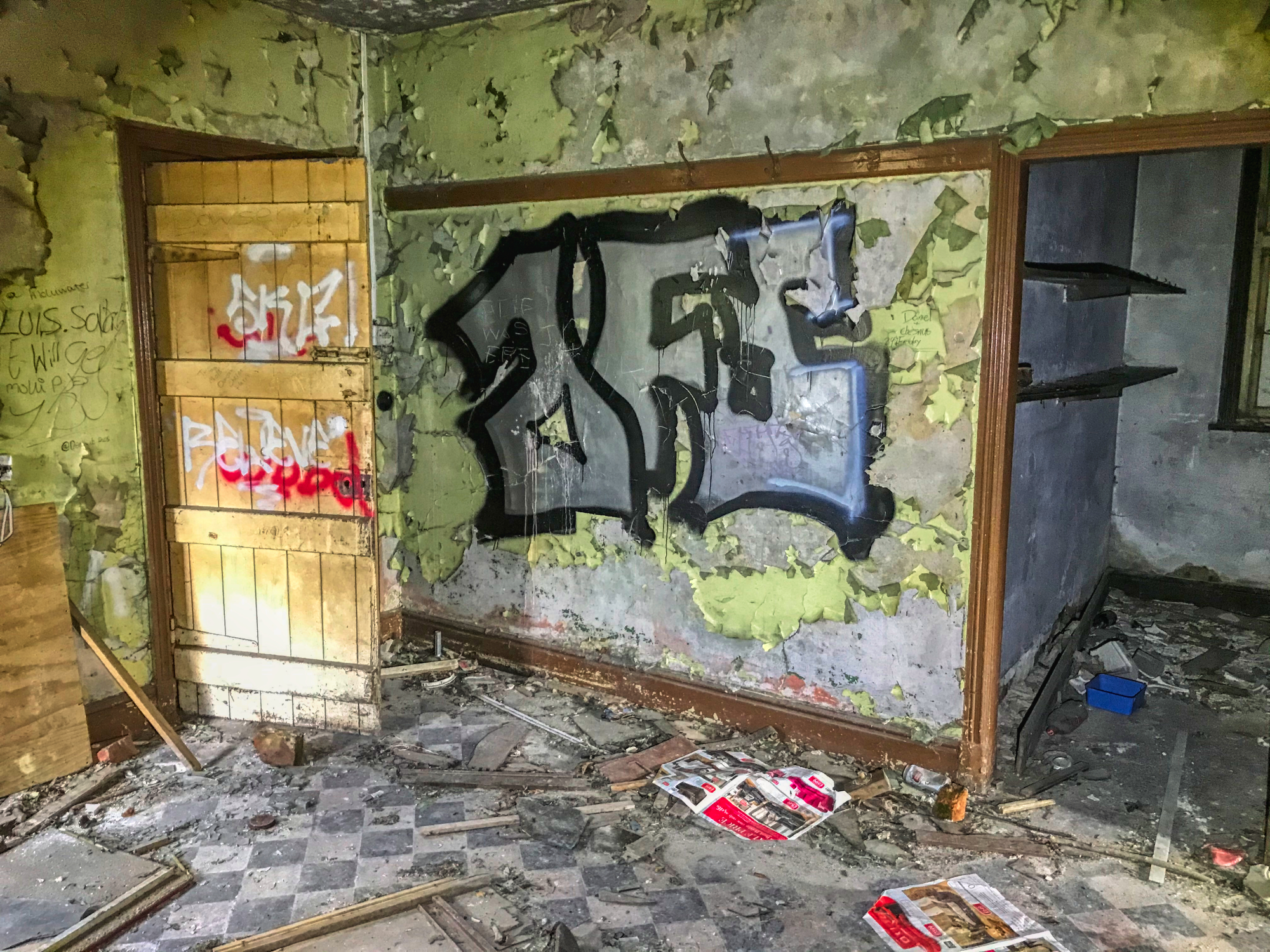 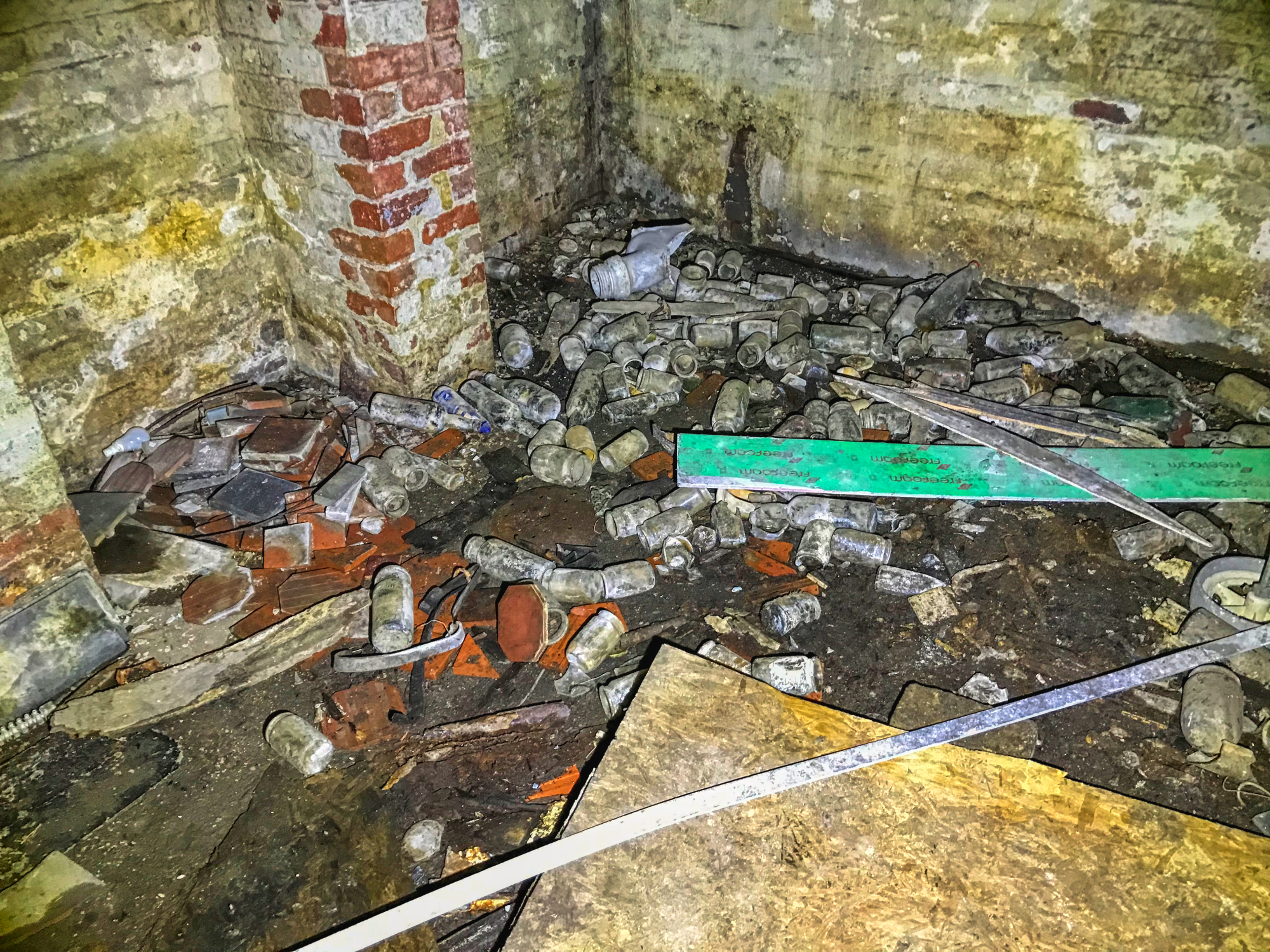 The cellar contained very little besides a stash of empty bottles and some ironmongery I could not identify. 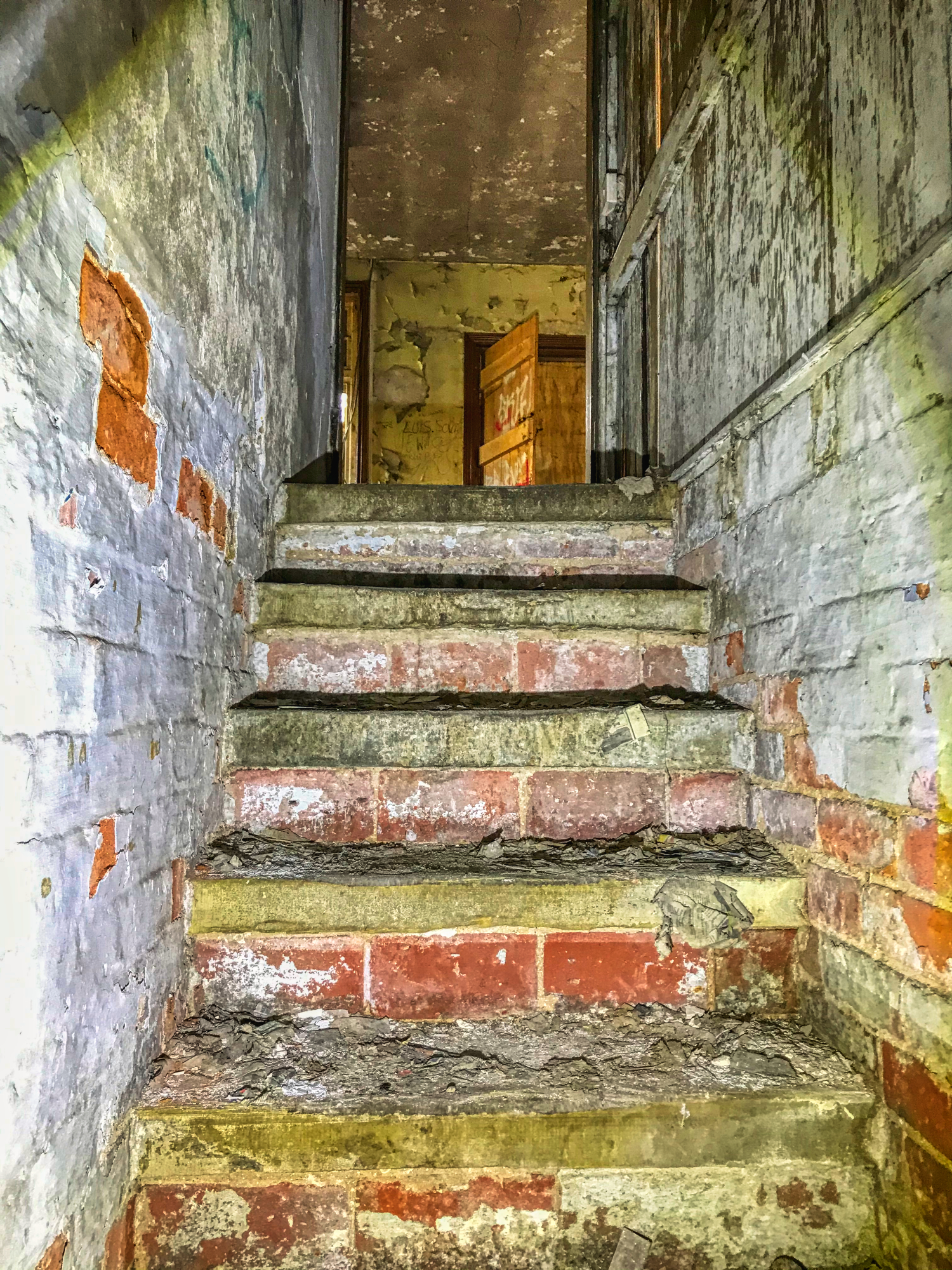 The stairs both up and down were surprisingly intact and sturdy. 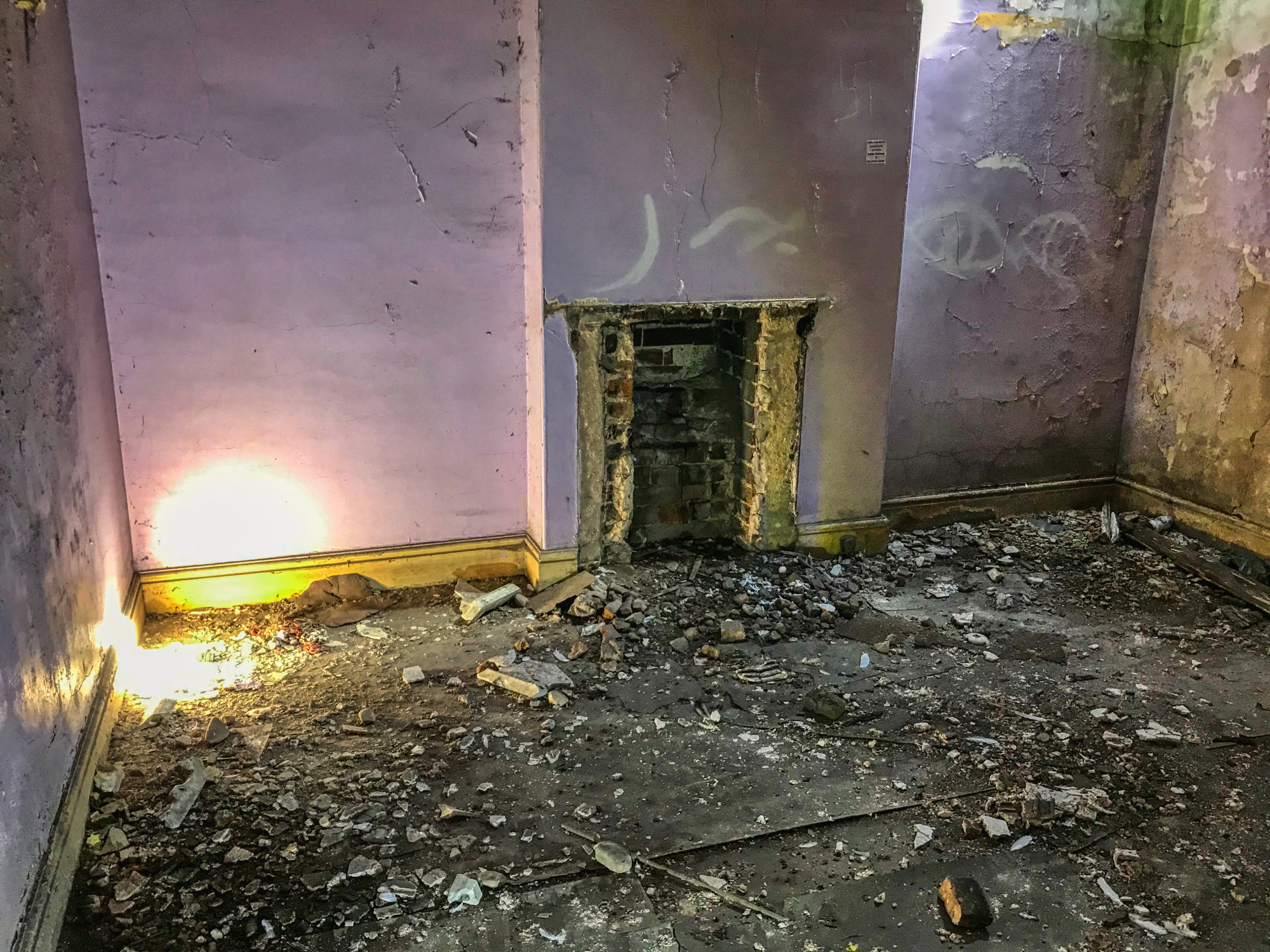 Why do properties have fireplaces upstairs? I was thankful the sun was shining through the gap in the roof to make this boring photograph ever so slightly less so. The closet in the corner was like every other one; completely empty. 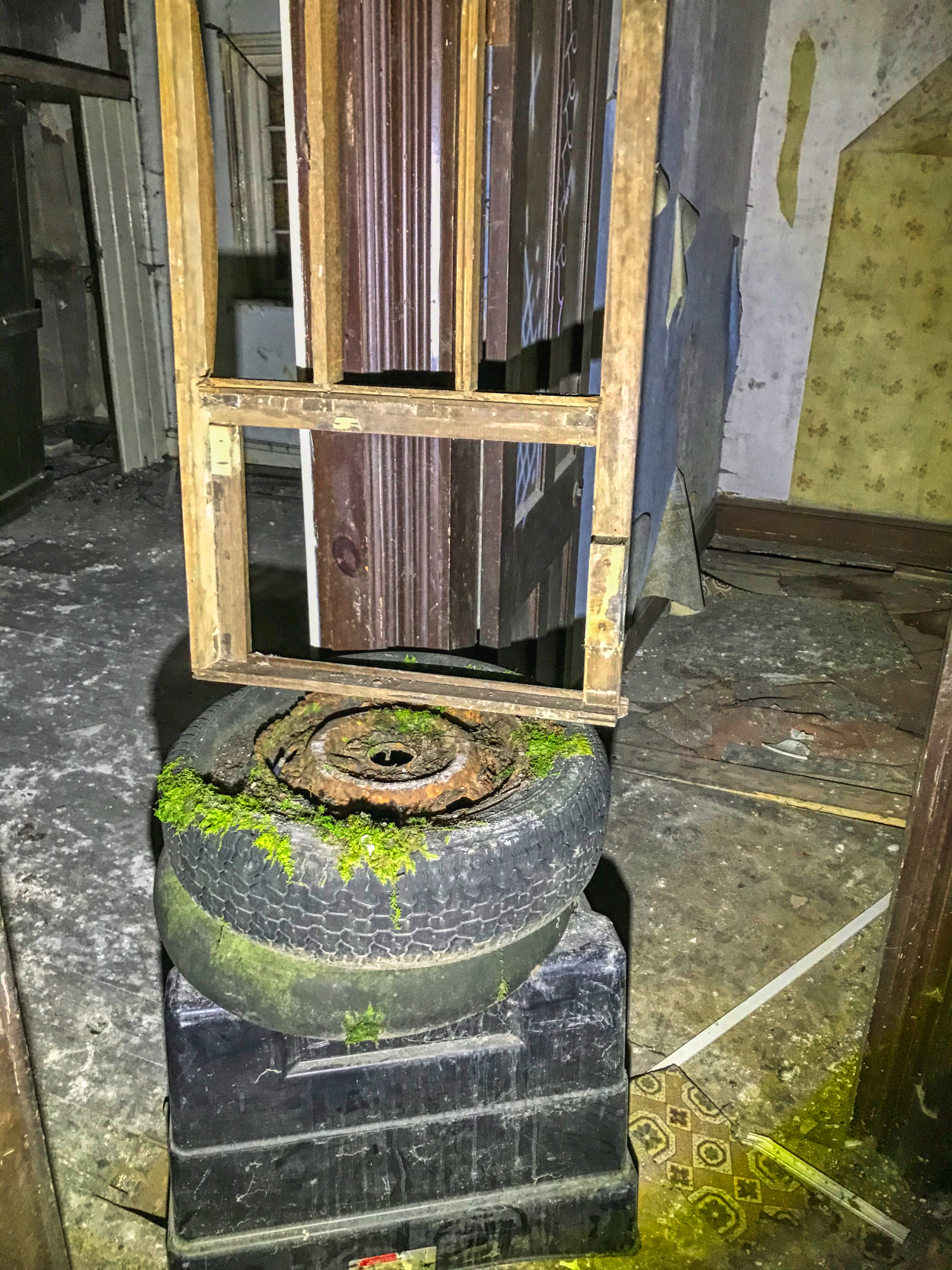 Why this pile of crap is stacked up with a tyre atop I don’t know. The tyre needed to be climbed over, and I was jolted from my walking haze of tedium. 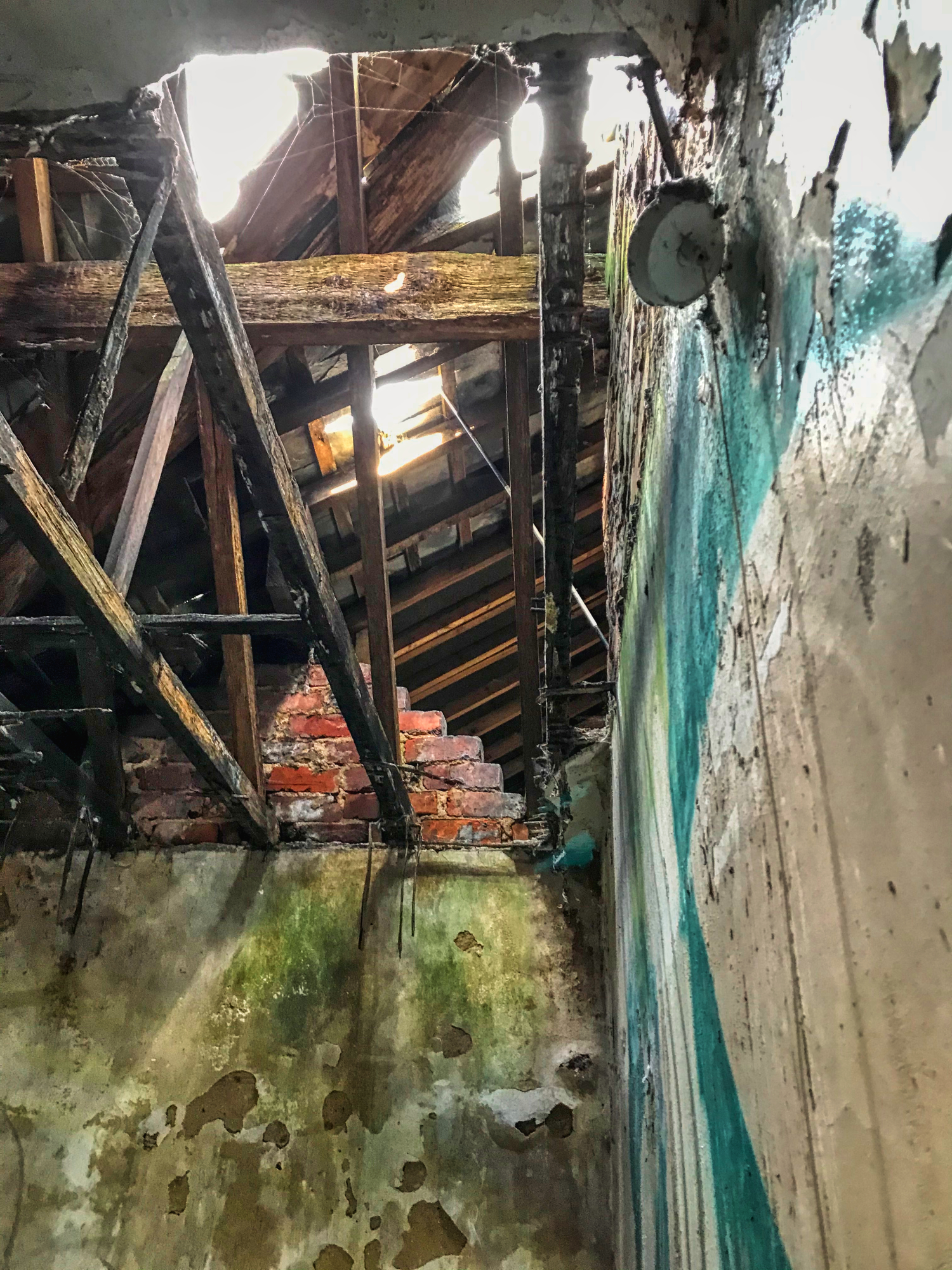 It was never going to happen and within minutes we were back outside and heading around the rear side. Not even one cock picture and the graffiti crew can't even write around here, sheesh. 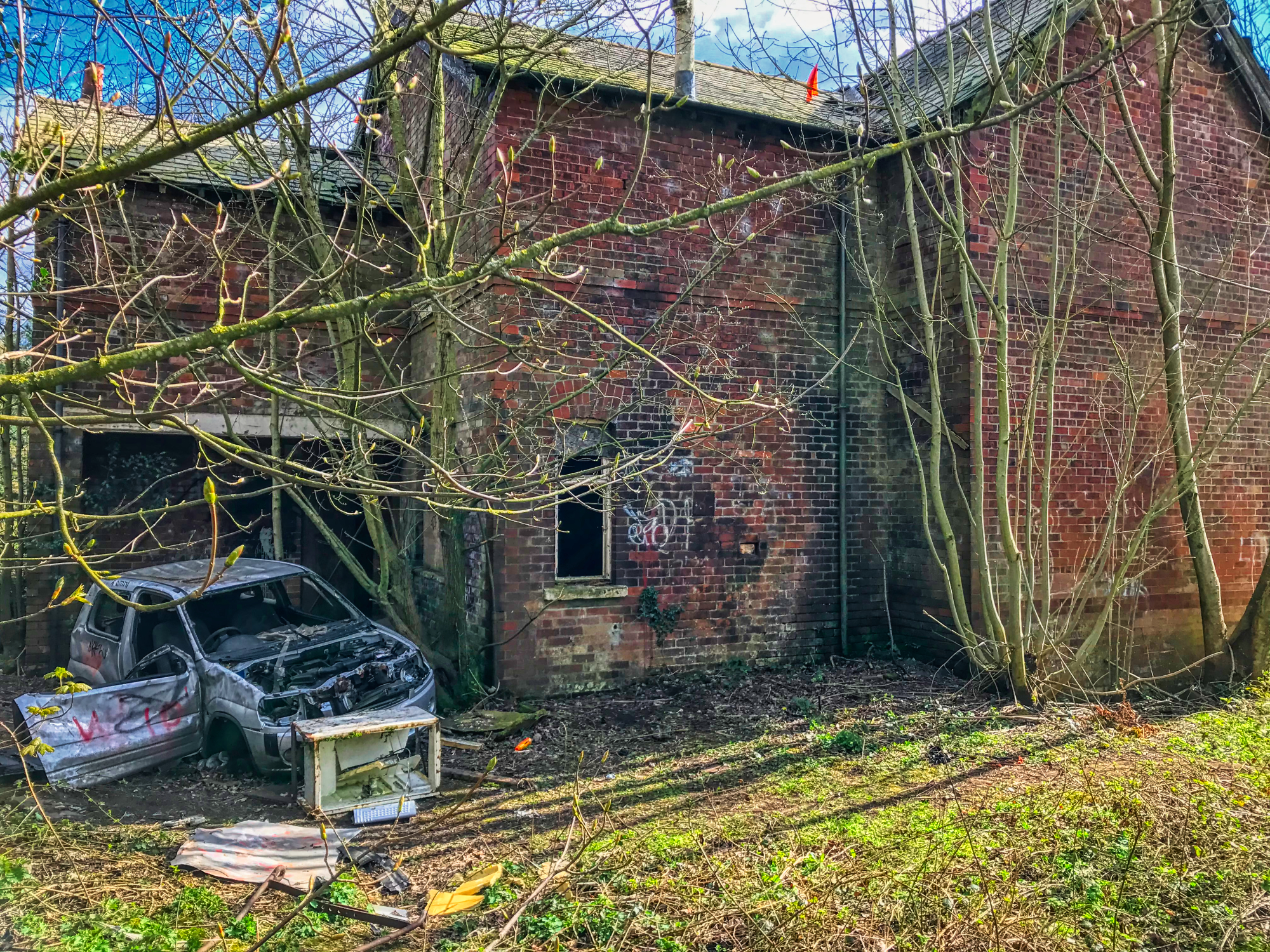 How the car even got there I don’t know. There must have been a driveway once. I looked but could only find pure jungle all around. On the other side of the wreck stood another open entrance way; it had to be explored. 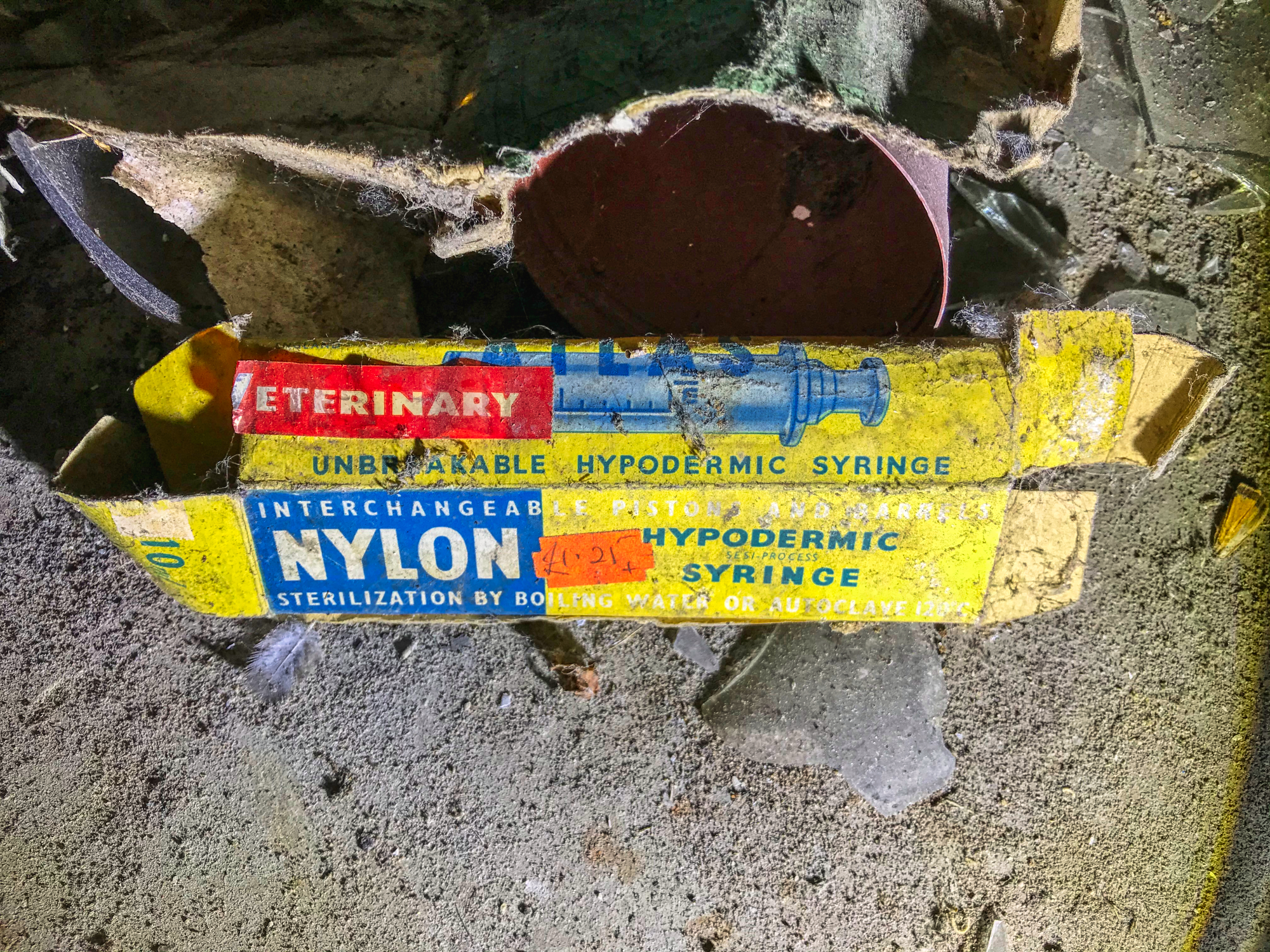 A Hypodermic Syringe box lay there. Old or vintage, I could not tell. Was this yet another junkie hangout? 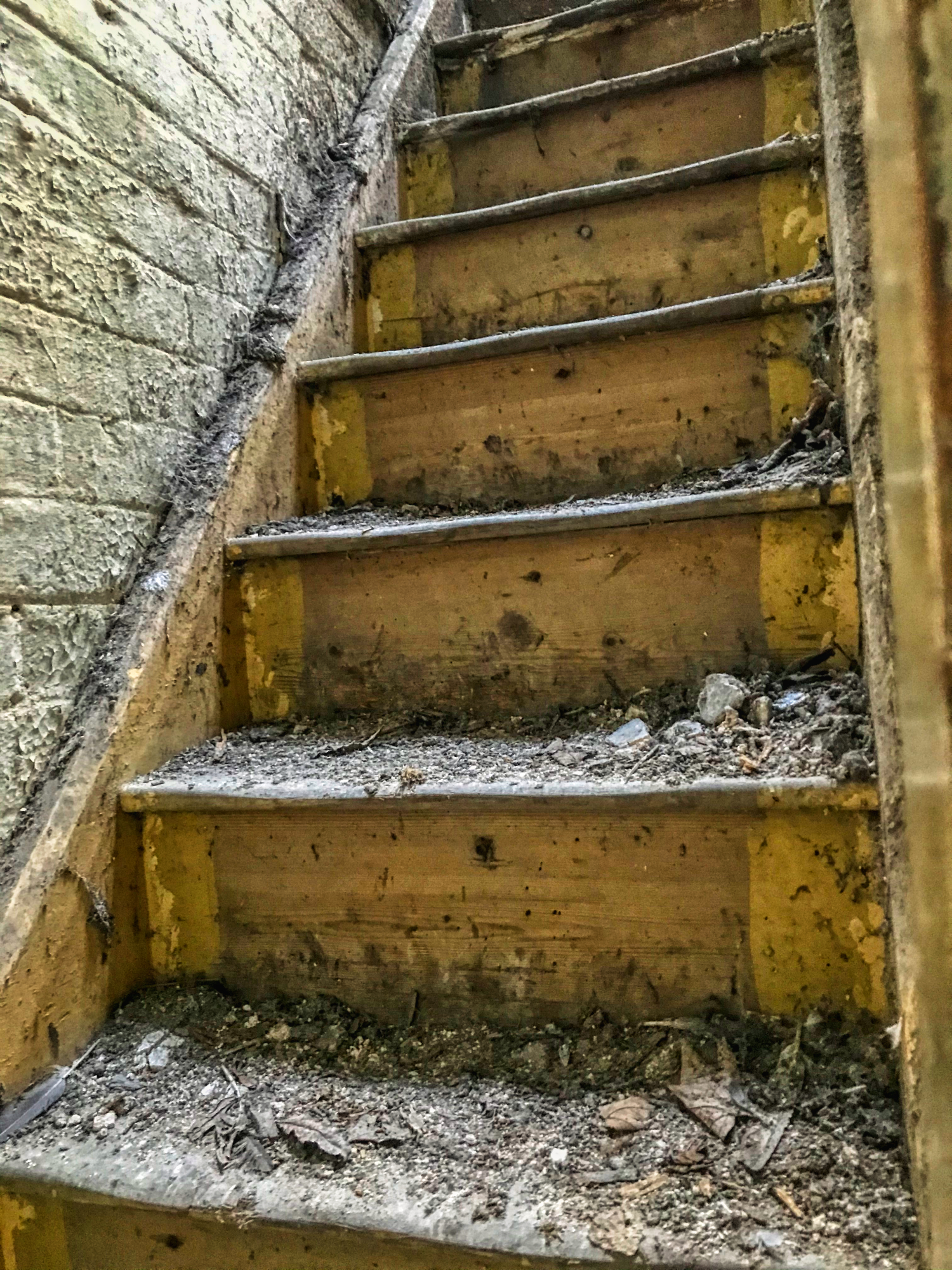 Some stairs with the bottom stair missing looked quite sturdy. You need very long legs at times, and after a stretch, I was climbing up to see yet more emptiness.

…’what a bore, there was barely anything worth looking at in ‘The Bypass House’… 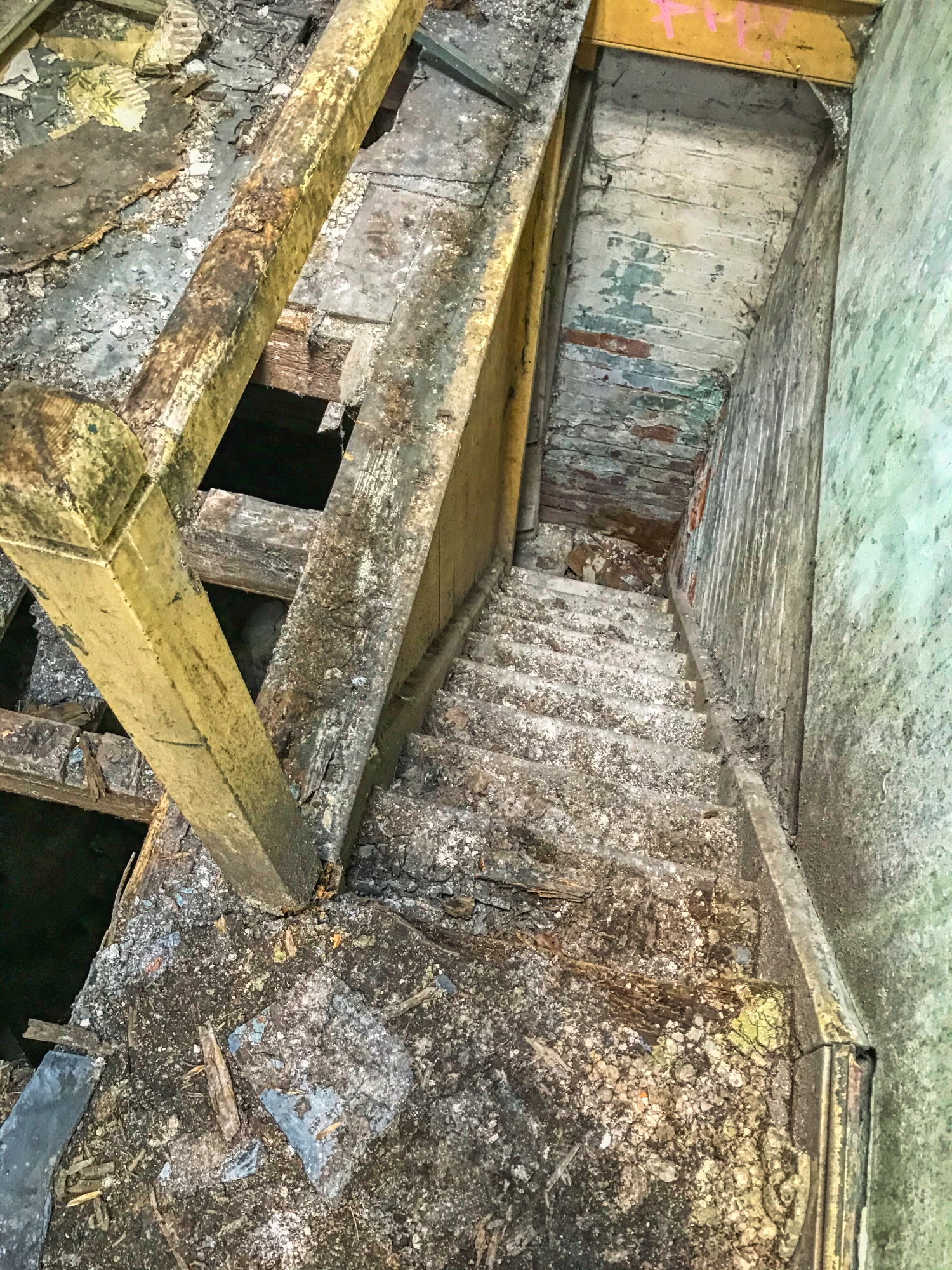 We left the house a little disappointed. A whole big nothing is sometimes what you find, and after seeing it I felt like I had not missed too much.

At least you got in, but that is pretty bare compared with others you've done. You made the most of it in your pics.

Yes, quite a downer.., I was thinking this was going to be much better than it was.

Found the best cock graffiti ever on day one over here in an abandoned research facility.

I don’t understand the message it’s pumping out though 😂 LOL, enjoy over there!

I have some tales to tell!
When I get chance to upload it’s dawn til dusk, in a fucking heat wave!

It's magical when you find a special place where you can contemplate used knickers, that is a beautiful post and you are godlike.

If only there were some used knickers, that would have been at least entertaining.

Worst graffiti I have ever seen 😂

Hiya, @LivingUKTaiwan here, just swinging by to let you know that this post made it into our Honorable Mentions in Daily Travel Digest #1238.

I guess they can't all be great but that was spectacularly devoid of much!! Even the graffiti was rubbish!

Yeah it was fucking terrible. I have a few more bad ones like this coming up.. as well as some really good ones.. heh...

Are you talking about your love triangle again?

Every triangle has its point... :OD

I found the best cock graffiti ever on day one of the road trip.