When the captain of a US Military Nuclear Submarine, The US. Colorado refused an indirect order to drop a nuclear bomb on Pakistan, he becomes an enemy of the state with a nuclear arsenal at his disposal.

This wins him the admiration of the wider global community who see this act of defiance against a corrupt administration in the USA as honourable.

Taking control of a NATO Early Warning System facility on a Pacific Island after another US Sub tries to sink the US. Colorado the Captain is forced into a game of cat and mouse with a newly placed and corrupt Secretary of Defence.

Forced to defend himself, his crew and his team Captain Chaplain observes a strike team of US bombers heading in their direction to blow up the sub and the Island, but Captain Chaplain calls their bluff when he launches a nuclear bomb targeting Washington DC. 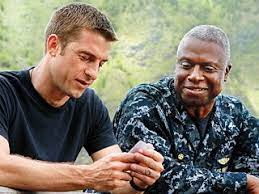 Once the corrupt Secretary of Defence realises the destruction that's headed for Washington, he calls of the Bombers and demand the Captain disengages the rocket.

During all the commotion at see before reaching the Island Captain Chaplain picked up a group of US Special forces and discovers that some shady stuff had gone down in Pakistan.

He leverages this information with the Secretary of Defence to arrange discussions on the Island, which has been blockaded after Captain Chaplain ordered a no fly zone of 200 meters around the Island. 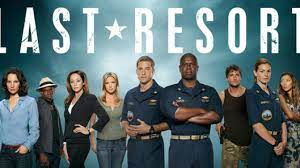 This is when we get to see the dirty tactics come out to play as numerous attempts are made to destroy the Sub, Island and it's people at all costs and the retrieval of something the corrupt administration fears more than anything else.

Betrayed by their nation and cut of from a world gone to War the captain and crew of the US. Colorada are forced to build their defences and prepare for what lays ahead.

There wasn't very much I could find on the soundtrack and it is unfamiliar to me, however I did find the names of the tracks and a link to the tracks, but nothing else, you can find more details about the song titles and playlist on tunefind.com

A US sub picks up Navy SEALs and receives an order for a nuke launch. Due to the circumstances of the order, the Captain refuses to fire. After escaping an attack from another US sub, the crew and SEALs take refuge on a small island.

From Presearch: Last resort Synopsis
PRESEARCH where I earn pre tokens for my research.
Images were also sourced from presearch.

An interesting look at what lengths a corrupt government administration will go to in order to silence the truth and how they are willing to treat their own war heroes in order to do that, astonishingly I find certain similarities with what has been going on these past few months, I really enjoyed the series, with plenty of action, a seriously engaging storyline and plot and a real feel that this kind of stuff does really go on behind closed doors.

If you enjoyed the review, I would appreciate it if you would drop a bomb on that upvote and reblog as it would help me reach more readers and potential followers, Have a nice day....