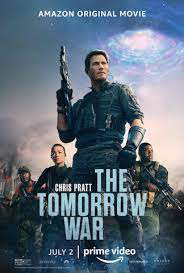 In the year 2022 a group of soldiers travel back in time from the year 2051 after suffering catastrophic loses in a brutal war at the hands of an alien species.

Left with no other option these soldiers travelled to the year 2022 to draft as many capable men and women to be transported into the future to the year 2051 to aid the fight against these other worldly creatures before mankind has been exterminated from the planet.

Chris Pratt plays the lead role, an army veteran who has become a school science teacher. 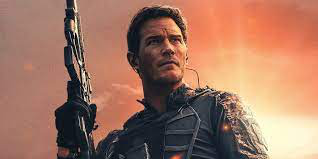 When watching his favourite football team perform live on TV, he and the world is stunned when the unexpected happens in a blinding flash of lights and time travelling soldiers from the future appear on pitch.

Days later he learns that he is to become a tier 2 conscript and be transported into the future in a global draft to save the planet and the future of the human race, after first being told that his death has been recorded in the future in the year 2030 seven years from the present time of 2022. 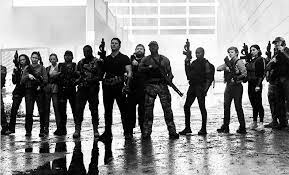 Once in the future the men and women from the year 2022 find themselves in the middle of a war zone in Miami, Florida the likes of which the world has never seen before.

The city is burning and the aliens are hell bent on eradicating every living creator.

They are sent on a search and rescue mission through the city to a nearby lab, a research facility, passing through the City streets they come face to face with the gruesome reality of what has already transpired, dead bodies litter the streets, fire and destruction surrounds them. 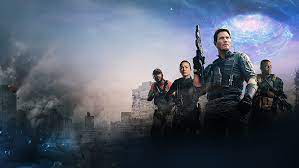 The Film score music is composed by Lorne Balfe who has also produced the score music for His Dark Materials, Songbird and Rebuilding Paradise
You can read more about that here https://soundtracktracklist.com/release/the-tomorrow-war-soundtrack/ 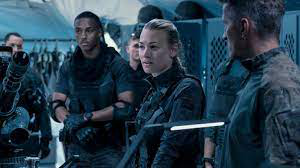 Soldiers and civilians travel to the year 2051 to join a global war against a deadly alien species. en.wikipedia.org

The film got me thinking that this could be used as a great method of deception by any possible future alien species to get rid of those prepared to fight any possible invasion, a rounded but sometimes choppy storyline, but entertaining none the less.

I am not going to spill the beans on the ending or action within the movie, you will have to watch and make your own opinions, I hate spoiling a movie for others but I will say it is an entertaining watch, I did expect more as the film has been advertised relentlessly everywhere, but I wasn't dissapointed.

If you like Sci-fi movies this is sure to tantilise your taste buds a good one for entertainment, Although the story is a bit lacking and the creatures leave a lot to be desired the film is worthy of watching, again thanks for dropping by, I would appreciate it if you would send that up-vote into the future and beat the living daylights out of that Alien re-blog as it would help me reach more readers and potential followers, Have a nice day....

@jaxsonmurph! This post has been manually curated by the $PIZZA Token team!

I watched this the other night. It was definitely enjoyable. The only thing that annoyed me was the series of coincidences in knowing the right person for x, y, or z. But, I suppose how things actually work in life as well. The person who is able to pull a team together might be able to work miracles. And for that, you need to know people. Still, it's fun to watch. Chris Pratt does a good job.