SplinterLands:: AirDrop Cards Received for Buying UntaMed Packs. Buy UNTAMED PACKS to be Eligible for the NeXt AirDrop 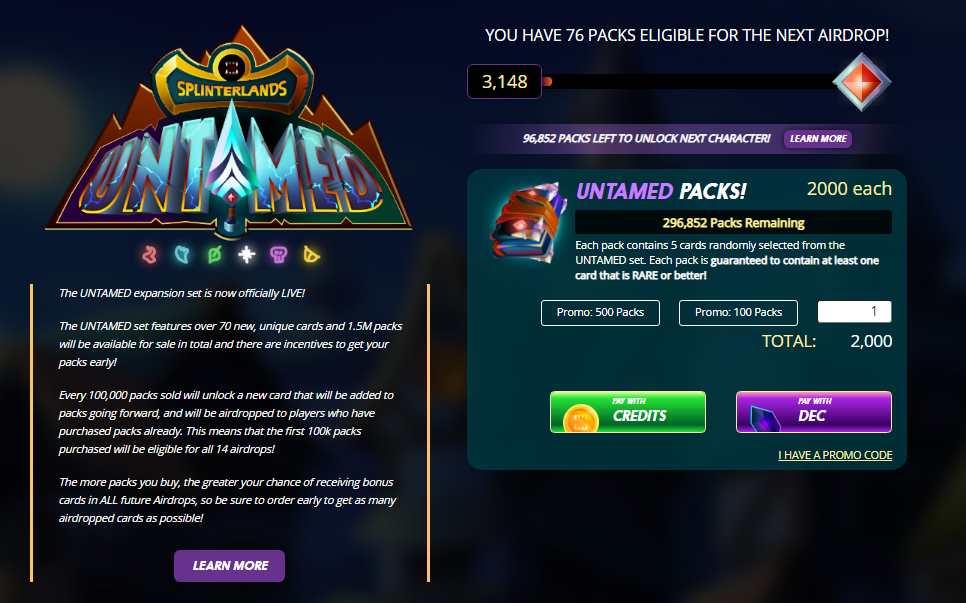 Finally; I got lucky this time for the ""SplinterLands:: AirDrop Cards"" that a player receives when a set of UntaMed packs are SOLD out. Yes; for every 100K UNTAMED PACKS SOLD a new character in the UnTAMED series is released. This time it was the 12th of the 14th Special AirDrop characters/monsters in the UNTAMED Series was released and AirDroped to players based on the UNTAMED packs they had bought.

Here is the List of the Monsters to date AirDroped & the details pertaining to iT:: As you can see in the given image above; the first image. I bought close to 76 UNTAMED PACKS & this is for the third time I guess I got lucky to get an AirDrop character. Not one; not two but FOUR of them.. Yes; I got FOUR - LOBSTRADAMUS EPIC WATER MONSTER As of writing this post LOBSTRADAMUS costs around $0.70+. But looking at the stats of the card I feel this card is much worth what it's currently being traded for. Normally; when a card is AirDroped people tend to book profits OR trade it for another card. After all this all FREE money & people would like to capitalize the opportunity that lies in front of them. I did the same thing for a AirDroped card that I SOLD immediately then regretted latter. I'm talking about the card - "YODIN ZAKU" a legendary card that was Airdropped part of the 5th AirDrop character. Currently, the card is worth $34+ and I sold it really cheap and regretted it later.

If you were lucky to have this new character - LOBSTRADAMUS EPIC WATER MONSTER AirDroped; my sincer advice would be not to rush is selling the card immediately. Let the price of the card stabilize and then take a decision. I think the stats that the card has i.e. the magic ability and being a low-speed card with high health makes the card much stronger for specific battle rules. I'm not selling any of the FOUR cards that I received and maybe even look further to buying some from the open market.

Did you get lucky this time to receive - LOBSTRADAMUS EPIC WATER MONSTER? Are you selling the card OR HOLDing iT? Whats your strategy? Lobstradamus looks like a good card to have at the front or back. I wasn't lucky enough to get a pack though from ~ 10 packs though.

This looks like a very good card to keep in your collection.
Congratulations on getting this in airdrop and best of luck with the game.
!luv 1

I wish I started splinterlands back then. I feel the train has passed and I regret it so badly. Good luck on your splinterlands journey

I haven't collected my airdropped cards yet but I plan to pick them up later when I have time. Thanks for the heads up.

These air drops are amazing! I found this last card extremely strong.