Data Analysis - Amount of Leo burned everyday because of tax for non-native posts .

Good evening to everyone , hope you all are doing good .

Some of you might already know this , there is a tax for posts / comments made from front-ends out of LeoFinance.

I had made a detailed post about it couple of months ago , I will take some data from that post itself as an example .

This particular example is taken from my other post

Now let us come to the present day and look at some stats .

That means users are losing 45$ worth LEO ( at current price ) everyday because they aren't posting or commenting from LeoFinance front-end .

Actually there was a high amount of LEO issued yesterday compared to other days .

Let us take another random day.

Let us take individual "token_benefactor_reward" and see the pattern .

What does it mean ?

It means that everytime a non-leo-front-end post/comment receives payout , the tax is credited to @leoburn .

Note: Sometimes 2-3 comments are clubbed and paid together to @leoburn but it rarely happens .

What does it tell us ? 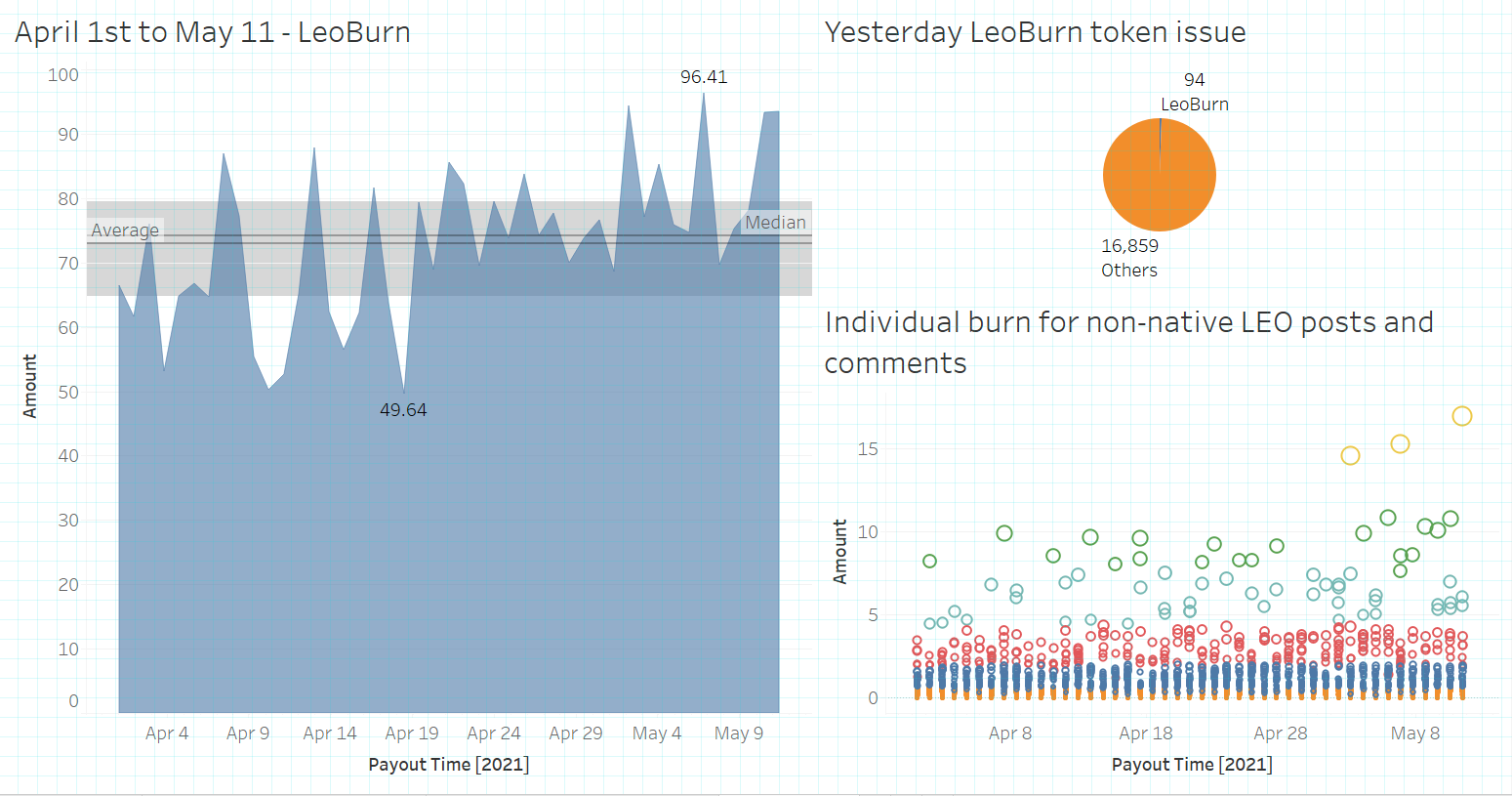 Looks like most Leo authors use Leofinance. I would have expected more tag abuse with unrelated content from other platforms, but if those posts aren't voted with Leo stake, they won't influence much these stats.

if those posts aren't voted with Leo stake, they won't influence much these stats.

I can pull some data to see what tags are used together most of the times . Like say #leo and #ctp . #leo and #stem etc.

It was less than what I thought it would be. But it does seem like there really isn't a lot of LEO burned if its more or less 1% per day. I guess it just shows that people are willing to use the front-end.

It is 1% of the daily generated LEO and that was more of an upper estimate based on the post. So we know that the people who don't use LeoFinance as their front end lose 20% of their author rewards (10% of total).

So out of the 10% of total LEO generated that people can possibly lose, it means that 90% of them are using the LeoFinance front-end. Or at least the comments/posts that are getting a lot of LEO. I would think that LeoFinance is doing a good job overall based on this info. At least that is how the math is playing out in my head.

@amr008 thanks for this informative post,i never knew all this before..

Really happy to see this @brainylady . Feel free to ask me for any info if you need .

More good info to file away for sometime later when the subject comes up. Which, as with pretty much anything @amr008 talks about, it inevitably will. Personally, I don't necessarily see this as a bad thing. How much HIVE do we "lose" by posting on LeoFinance rather than Hive? Also, some of the newer tokens are looking for more engagement and everyone knows the LEO community is one of the most active in the Hive ecosystem. So posting from somewhere else and adding it on here makes sense for them, as long as it meets the criteria of what Leo is about. Good job, amr!

The more they burn the better

It decreases the overall LEO issued ( even if it is just 1% per day ) .

@dagger212 I completely agree with you. If the users from other front end feel that their content matters to the leofinance community then it is good to have the same. The rewarding is part of the governance of the leo community and there should not be any problem for even the contributors who are posting it from outside. I think burning also helps in maintaining the supply of the coin and affects positively on the prices. So overall its a great thing and its good to see that close to 1% of the total daily generated tokens get burned due to this tax.

Yes, but they're "getting" a lot more of the token they want from the front-end they're using. The LEO isn't the goal, it's an added bonus. If it's not the full amount, who cares? It's still more than they would have gotten had they not tagged it from the front-end they're using. Like I said, they want the POB more than the LEO. The LEO is a bonus and the LEO community benefits to a small degree by "taxing" it and burning.

Totally agree with you on this one . CTP has become the same ,everyone uses CTP as a tag just to add it to the wallet , it is a bonus . The fact that CTP doesn't have a tax is more encouraging to use it .

I think this has to be weighed from cost benefit ratio. I have never done these kind of projections before but you are right, instead of wasting those little leo tokens for every token, if those can be staked I guess there would be a good amount of value generated for the platform. We need to use leo front end to post into those tribes which donot have such taxes like the sports

But Sports and Leo posts rarely come together . We see very very less amount of sports posts which are also Leo posts .

Thanks @dagger212 :) You always make my day with your compliments .

I don't necessarily see this as a bad thing.

Me too , I am actually suggesting other tribe owners ( especially SPORTS ) to put a tax on non-native comments and posts .

some of the newer tokens are looking for more engagement and everyone knows the LEO community is one of the most active in the Hive ecosystem.

Right on . The amount of comments from Leo front-end actually decreased in recent times because of the competition from the new tribe .

Hehe many are indeed burning it :)

But we gotto remember that this doesn't include post promotions . So actual burned is more than this .

Nice to see another 2016 early adopter on here! @darkflame got me back on here in 2018 but I created the account in 2016 and wish I would have blogged more on stem earlier, not missing out this time around!

I would have blogged more on stem earlier, not missing out this time around!

Same here @physionphil . I came back in 2020 actually and have been active eversince .

All the way up from here!

One could say you could not post from LEO and burn more tokens thus reducing supply/ inflation hahah
Nah I get what you're saying it's more of a incentive to use their front end which is good however I don't think many people actually know about it so this is good.

I always wonder though if it would be better to not burn and use the funds for development or curation or even better a dividend payout to those who staked for 30 days or so. Now that could be interesting.

Well, that's a good way of incentivizing using the Leo front-end. Do all tribes have this tax for not using their front-end? I can't remember where I read it but for POB, it was the other way around. Or maybe i'm remembering it wrongly.

Some tribes like Sportstalk and CTP doesn't have any tax .

I see. Thanks for explaining. 50% is a really steep tax... very interesting way of doing things. Good to have these experiments.

Definitely , 50% is way too steep , that is why STEM has very less supply . One of the best tokenomics here on Hive is STEM .

I keep meaning to ask . . . does LEO have a dust threshold do you know?

When I give smaller upvotes on comments I wonder if it is wasted.

Well 0.001 is the minimum curation reward author reward . So if your upvote is worth 0.002 LEO then you are good .

Good to know. Thanks!

It means I can keep spreading my vote around and know that commenters will still be rewarded.

I agree with you, the more the burn the better, thanks for sharing @amr008

No problem buddy :) My pleasure .

Make sure you don't burn a lot of LEO this way .

I understand the need for the tax and all, but it is such a pain to jump back and forth between front ends when you post and are interested in a various number of communities. If posting in general wasn't bad enough, when it comes to commenting, forget about it. When I am at home I used Ecency on my phone to comment. I know I am probably losing rewards, but the hassle of trying to use three or four different front ends that aren't necessarily optimized for a mobile device is just not worth it to me.

I totally agree with you . I think the new update of notifications will help in this matter although it isn't working as perfectly as I hoped it would .

Maybe it will get better with time...

Great explanation of how people are losing out by not using the Leo Finance site.

I hate to see people lose LEO as tax without even knowing this "non-native tax" .

I often use @ecency to post and reply, as it rewards the activity, and the front end is pretty good, but sometimes the tax is worth paying, especially for comments as you receive 5 ecency points which is worth about $0.015, and often comments don't get upvoted at all, and I am making comments more for the engagement/enjoyment as opposed to the upvote potential.

But today is the exception, I am posting through proofofbrain.io