I have this habit of looking at the crypto market as soon as I wake up. Today when I woke up from my bed, I was just checking my Coingecko to see the watchlist and to my surprise, Hive had a great pump in the last few hours. The good thing about the pump is that it is not a short-term pump but the price is looking very stable. 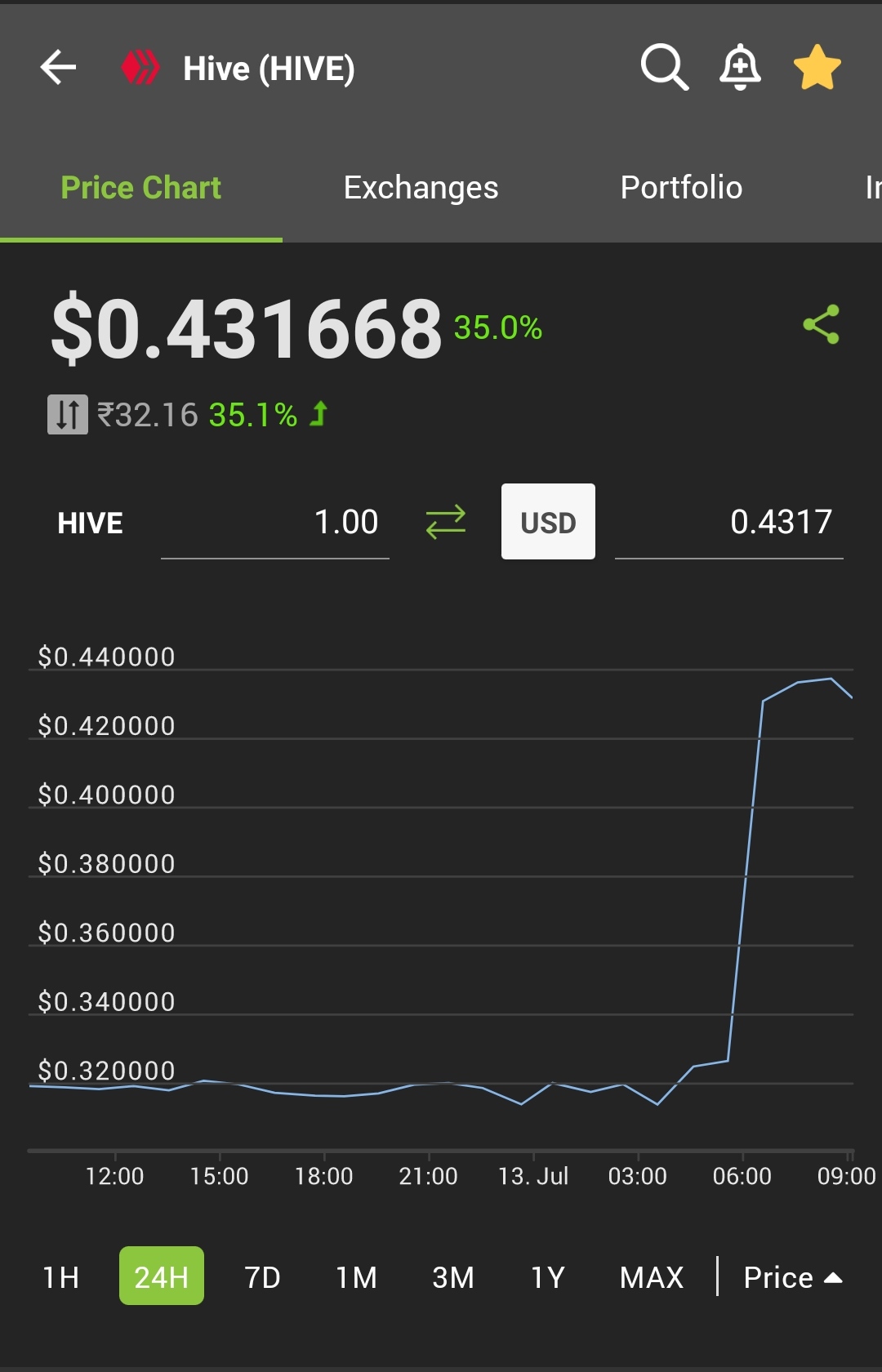 I was surprised by this because the other coins are having a bad day and declining in price and just Hive had a great pump increasing its value from 32 cents to 43 cents. Last night when I was about to go to bed I watched the price was around 32 cents and I was wondering if I should be selling my holdings already which I bought for 30 cents last week. I did place a sell order at 35 cents and it was filled in this pump.

People who have been on Hive for a long time and watching the price of Hive go up and down would know that this is a good opportunity to sell and buy back when the price goes down again. I used to do that but mostly end up in bad trading. Unfortunately, I don't have any big liquid holdings right now with me. Otherwise, I would have used this opportunity to sell some Hive and wait for the next turn to purchase it back when the price goes down again.

When the price was around 18 cents a week back, I was very curious to purchase some Hive. It was indeed a great opportunity. I did not have enough funds in the crypto world to do that. I was thinking of bringing some funds from the fiat world to the crypto world but before I react the price was already up. The least price that I could purchase was 30 cents. Now surprisingly the price has pumped to a great value of 43 cents and half a dollar Hive is not too far.

This pump not only brings good fortune for Hive but also for the Hive engine tokens on this platform. We have so many tokens on Hive in the sidechain used by different projects. When the price of Hive pumps, it will also pump the price of these side-chain tokens as well. Most of the tokens are just purely dependent on Hive and those tokens see a good time now. For example, DEC is usually a stable coin where the price of the coin is pegged to 1$ per 1000 DEC. It appears that it is a good opportunity now because the price of the coin is a little over its soft peg value. So maybe we can sell it now and purchase it back later. 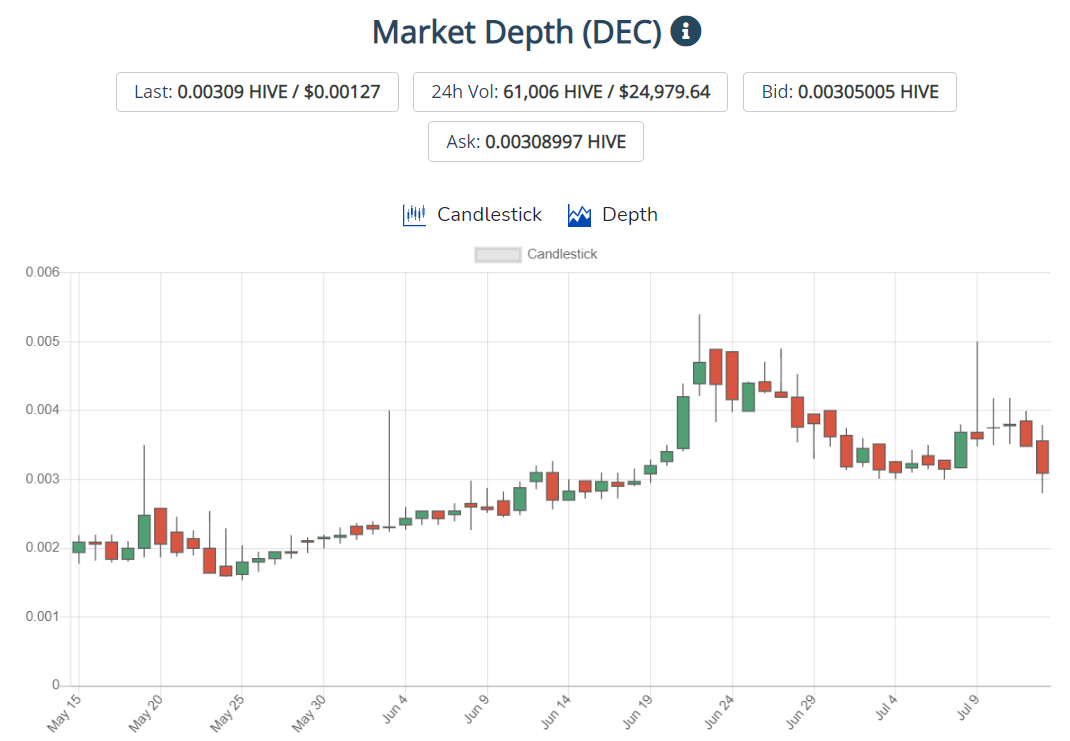 There are a few tokens that are listed on other exchanges as well. Those tokens will not see a big pump in their value. For example, Leo tokens are on 3 blockchains and are being traded heavily. So the price is pretty stable because even if the price increases in one blockchain, it would be stabilized from the other exchanges. But in spite of that, a pump in the price of Hive definitely brings some good fortune to the Hive ecosystem.

What is the reason for the pump?

From what I observed in Coingecko, the trade volume was high on the Binance exchange and one thing is for sure that someone is buying Hive heavily. I don't know if they are investing or doing quick trading but it is definitely good because the price hasn't dropped rapidly after the pump. It is pretty stable above 40 cents.

Apart from this, I was wondering if the AMA that happened a few hours ago could be the reason for the pump. There was an announcement in the official Hive discord channel about an AMA with Hive and StealthEx. There was also a post on the same. I was wondering if that could be the reason for the pump. If that was the case, then I think we have to be doing frequent AMA sessions like that especially for partnering with other opportunities.

Considering the fundamentals it should be at least $1, so still undervalued 😁

Yes, indeed Hive is an undervalued cryptocurrency. It has to be above 1$ at least. Let's hope we get more investors this year. 🙂

Hopefully to stay green as much as possible :D

Hey @gabrielatravels, here is a little bit of BEER from @bala41288 for you. Enjoy it!

Oh the pump was from the Binance Exchange? I saw a post earlier mentioning it was from Upbit or the Koreans but I am never really sure.

As for the AMA idea, I think it would be nice if people started taking notice of the block chain.

I was not sure which exchange pumped it. I saw high volume on Binance when this happened. At least that's what I saw in CoinGecko.

As a contraryan I am happy that I started the power down before this. Being contrarian has been paying off, I sell while it soars and buy while it drops

According to what I have seen Hive could be much higher these last months, anyway I am doing power up now that the price is low.

Yes, indeed a good time to power up is always. Powering up is highly rewarding especially after HF25.

Yeah eagerly waiting for that moment. 🙂

I see hive blooming all the away above $1. But I need to learn the power down theory.

I would recommend learning the power-up theory instead. That's what will keep you rewarded. 🙂

That's something I should learn. Thanks a lot for this reminder, I will give it a thought.