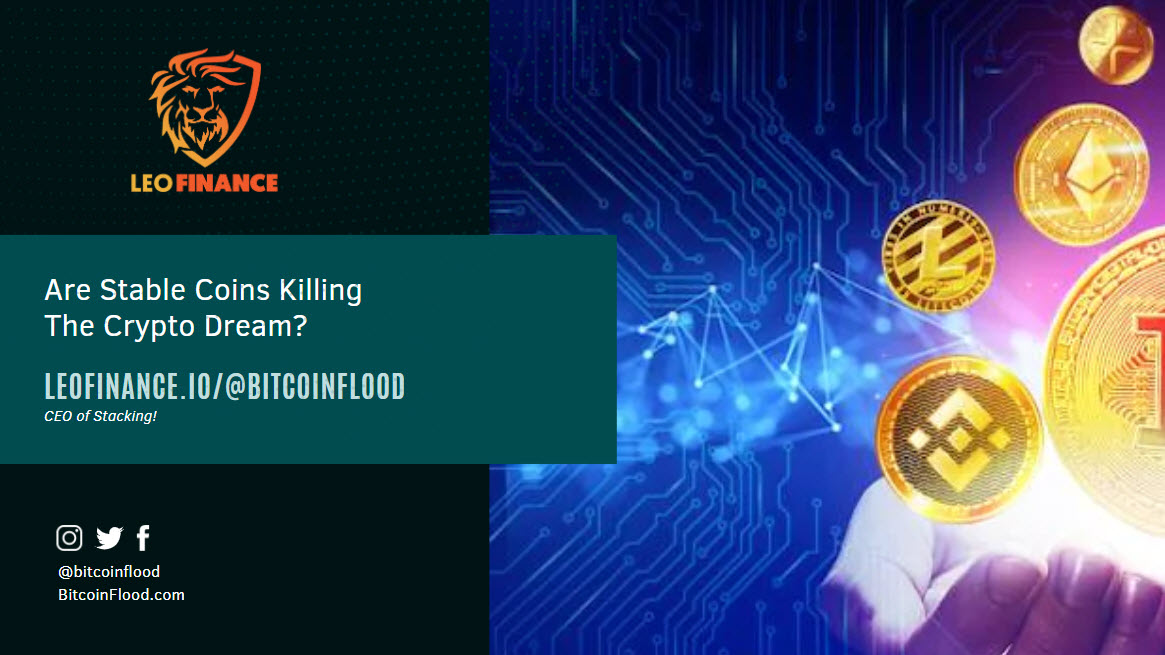 Stable Coins Could Be Killing The Crypto Dream

As much as we have all started to love stable coins I question if it's starting to lead us down the wrong path. Bitcoin was born from a dream of having a decentralized currency that was a borderless and trustless system. Fast movement of funds large or small anywhere in the world. What use to take days now takes 10 minutes.

Since then cryptocurrencies have evolved to have larger blocks and faster block times allowing for even lower fees and faster turn arounds. That's all well and good but besides that they haven't really evolved much more than that.

The first stable coin to release is Tether which was launched in late 2014. It remained the largest and only real stable coin for years until just recently when nearly ever chain started to release their own stable coin.

These stable coins are suppose to be backed by FIAT or assets that hold the $1 USD value peg. (Note this clearly shows the USD is still the primary de facto when it comes to trading above any other world currency) However there's really nothing saying that this people or companies have to actually be holding these funds. It's decentralized and unregulated so pretty much anything goes without any repercussions)

If you start to take a look at volumes and velocity of stable coins over crypto currency coins such as bitcoin we can see a clear trend happening right now. More money is being funneled and used in stable coins over Bitcoin and Ethereum to change hands.

Just Tether alone is crushing the two top cryptos in terms for volume in the last 24 hours and this trend doesn't seem to be slowing.

Fueled By DeFi and Interest

Stablecoins offer a lower risk as they should hold their $1 value. When you start throwing around massive interest rates like 10%+ into a stable coin what you get is a massive demand from it and a flood of new money coming into these stable coins.

Why would someone for example keep their money in a transitional bank that fees you and offers you a slap in the face interest rate of 0.5% when you could take that same money and put it into a stable coin and collect interest on it of 10% or more likely putting it into coinbase and earning 4% APY what most people are use to for a savings account. Plus coinbase is highly trusted now that it's gone public. That's 8x earnings with very little risk.

This is why the FED is currently in a panic. Floods of money is being moved out of their centralized trackable system into a non trackable system that's unregulated. This shift if it goes on for long enough will see floods of money enter cryptocurrency but instead of traditional cryptos like Bitcoin, Ethereum it's instead being injected into stablecoins.

This could prove to be an issue for cryptos like Bitcoin and Ethereum in the short term but long term it very well could mean that there are stacks of money ready to be quickly traded in and out of these currencies. It's going to be interesting to see what happens over the next few months. Will these interest rates stay at these crazy high levels or quickly tapper off? Or will they end up sucking all of the funds out of bitcoin, ethereum etc into these stable coins and stablecoins will become the main platform of choice over these other crypto assets? It could be actually killing the dreams and vision of Bitcoin, Ethereum etc.

Thank you for sharing. In a way i agree that stable coin is killing traditional cryptocurrency

That is an interesting point of view... Like every time, I think that interest rates (for stable coins) will balance out, and probably go down... The same goes for the volatility of BTC, ETH, and some other big coins and that's totally fine... As a matter of fact, only then crypto will be ready for mass adoption...

I don't mind that those things happen, but that will take some time... Until then, we should accumulate and use current "swings" to get more of those valuable crypto assets... :)

For stablecoins like Tether that is supposedly backed by Fiat I think that is the wrong way to go, and they could also be put under regulatory pressure for that very reason, and if I am correctly informed they also are.

Fo HBD though, which is backed by Hive and only uses the USD as the aim for what it wants to be pegged to in order to keep the purchase power steady, then that is a different story, and what I view as the right way to stabilize purchase power, given that the dollar stay stable too lol.

Over time seeing experiments using Hive Engine tokens to make payments with, I have come to the conclusion that it is much better for any tribe owner to use HBD to recieve payments on any affiliate marketing sites they also own, and then add a rebate for staking the tribe token as opposed to using the tribe token for payments directly.

This approach is also what I intend to use for an upcoming site myself and with the ALIVE token.

Your take on HDB is exactly what I was going to comment.

The fact that HBD doesn't directly pay you $1 USD, but $1 USD worth of HIVE should place it outside the bounds of the US regulator.

HBD is going to be a hugely important part of the Hive ecosystem going forward.

Yeah that is exactly the point, HBD is not handling any USD, so that way of putting regulatory pressure on it is closed.

Little by little more people are realizing how absurd the system is and are moving to cryptos, I see tether as a lifeline so I don't have to change my regular cryptos to fiat every time I want to get some of my money out, I think that is its function in the first place and is the reason why so much money is in bitcoin right now.

Stable Coins Could Be Killing The Crypto Dream

This depends on what the dream exactly is.

Bitcoin was born from a dream of having a decentralized currency that was a borderless and trustless system. Fast movement of funds large or small anywhere in the world.

But you're forgetting bitcoin is also the most battle tested.
Upgrade comes in November and to me that seems like a mistake as it introduces new uncertainty to security risks to the system and it has to be retested all over again. Bitcoin was like fort knox you were not breaking into it lol

This is actually a very interesting thought, but we have to consider the massive amounts of money that do exist. Is Tether or another stable taking 43 million a day going to mean that there aren't millions of dollars more looking to speculate for 10x+ gains? I think it is analogous to the stock and bond market where cryptos like Bitcoin are the stocks and Tether would be the bonds. Rarely do we ever hear wall street complaining that there are too many bonds being issued and that prospect could hurt stocks because we must remember the concept of diversification when investing. I really like the thoughts you produced here and am going to feature your post on my new little segment called "Rob's Leo All Stars"!

The markets are rigged, the volume is fake, the exchanges don't have everybody's crypto.

How long has it been since we had an effective not your keys, not your coins day?

The fed has rigged the markets ever since they were created.
Computers made it easier to do, and easier to track.
If only we had somebody willing to take it all down.
We could have our freedom back.

Only way to combat those with wealth is to accumulate it yourself and not give them more. I don't believe the markets are rigged. It's fair game for everyone but it is more so like gambling anymore as nothing is base on real fundamentals and instead people memeing around. Everyones always going to complain something is rigged if their not on top. There are actions you can take every day to improve your chances.

If I was allowed to naked short silver would I be charged with a crime?
And, when charged, allowed to only walk away with a fine of less than 10% of what I stole?

C'mon, the people that killed Kennedy have been very busy.
The people that created the fed knew what was happening all along.
It's how they stay on top, and out of a cell.

Nickels and quarters are worth ~.058usd as scrap.

Well, stablecoins are considered a threat not only to cryptocurrencies but to U.S. national security, so we are likely to see a lot of regulation soon.