Are "Stable Coins" Setting Us Up For Collapse? 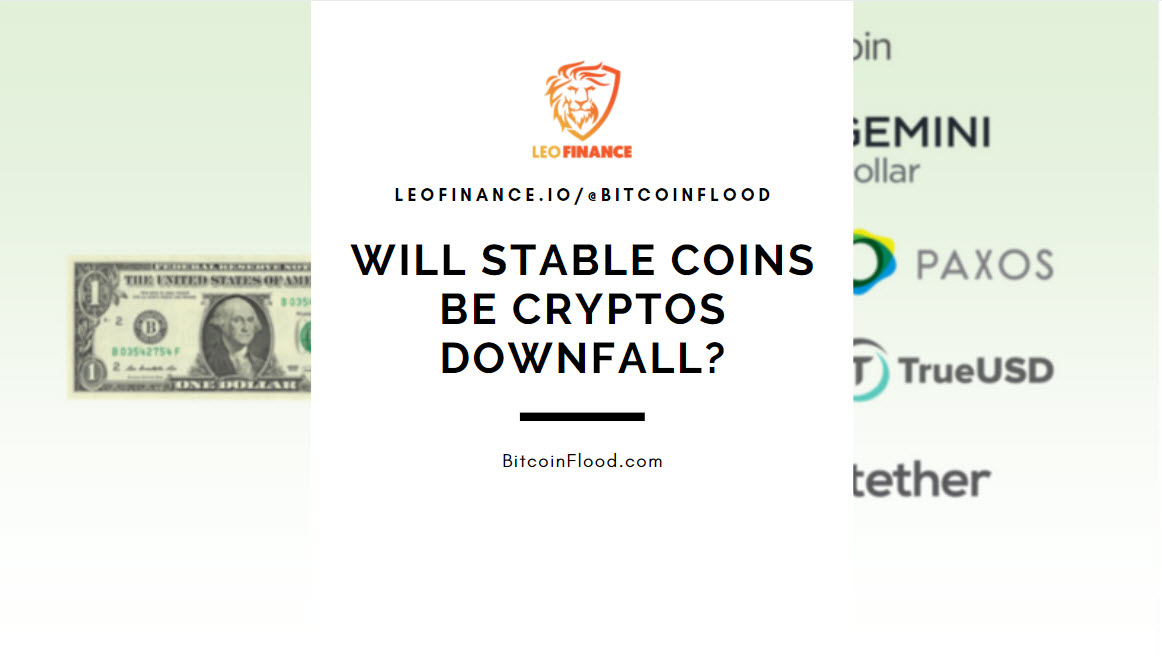 It wasn't all that long ago that stable coins where not a thing. In fact only Tether was around for the longest time and when doing so it came under some serious heat. After all of this time we still don't really have any clear answers about the number one stable coin called Tether which currently has a market cap of 62 Billion. Over 112 Billion dollars is currently locked up in crypto in stable coins which is nearly 10% of the crypto market cap.
*If you don't know what a stable coin is it's a coin the should always hold and represent $1 USD

You know me I'm not into FUD so don't take this article as a FUD article but instead something to be watchful of and how we need to actually work AWAY from stable coins instead of producing more.

Tether has had a very shaky past in fact the audit that was suppose to take place and then be taken place monthly never happened and still hasn't happened! Instead what happened was the company that was meant to audit the books of tether cut ties and left. (they are not obligated to say why they left but normally when that happens they see something on the books they don't like and break ties with the company so they aren't held responsible for it)

Since then we now now that only 5% of Tether is backed with cash while the rest is in short term corporate debts and commercial paper.

You can honestly think of Tether as a bank now when you look at where the funds are and being generated from. With only 5% in cash reserves it's pretty much exactly like a bank which only needs to hold about 3% cash reserves on hand. That means if enough people went in to cash out cash banks wouldn't have enough money to go out and it's what happened during the great depression. While yes there are now factors in place for banks to not have this happen again it doesn't mean it couldn't happen again.

However on the crypto front of things there are no regulations or backups. If enough people tried to cash out their tether there simply isn't enough liquid funds on hand to pay out everyone. Most of it is locked up. This in theory could start to show us that these stable coins over time could be setting us up for what could be a repeat of the great depression however instead of it being one country it would actually be world wide.

To me it's not that far fetched of an idea that it could happen if enough funds continued to be injected into stable coins over crypto currencies.

Moving forward there will most likely be a higher demand to print and produce more stable coins. We have already seen a drastic increase from where stable coins where just a year ago at

It's important to understand Tether is NOT a back by $1 USD! Most of these "stable" coins are not backed by $1 USD which could seriously get us into major trouble in the future. This is my callout for DOWN WITH STABLECOINS unless they are truly backed by a 1:1 ratio and proof is shown.

What are your thoughts on HBD as an alternative stable coin?

Let's give it a few weeks into this hard fork and I'll give my opinion then lol. It hasn't been holding the $1 peg at all $0.88 and $1.30+ the other day makes it VERY unstable of a stable coin.

I was going to ask about HBD as well... how does it fit into the stablecoin picture? Otherwise, I definitely agree with what you're saying... although I don't know much about SC funding or liquidity.

It seems to work a little different it's for sure not stable though so I don't consider it one. If it held the $1 peg it does have it's benefits for being used here on hive in terms of payouts for devs.

The official word is that they're implementing measures to stabilize it around $1 USD... but I'm still struggling to define the difference between HDB and USDT. If the savings were substantial and everyone wanted to withdraw their HBD at once, could they do it without devaluing it?

I don't think there will be any true stable coin in the way you define it unless the US government comes out with a CBDC. Since its by the government, we know they can just print the dollar if they need to.

What do you think of DAI? I have been hearing a lot of people like that stable coin and everyone else has already kind of mentioned what you think of HBD.

Not sure about DAI and what backs it up. With any "stable" coin though you are relying on them to actually have the assets to back up the $1 value. Just like a bank they could be susceptible to market crashes and none repayment of the loans especially in crypto.

Once CBDS's come out they will atleast have something to teather too properly and more precise too which will be awesome and safer.

Might be the first real backed $1 - 1stable coin value. Ones that other assets are very susceptible to market conditions.

You have pointed out some valid points and two of them are really scary from my point of view...

The first one is that Tether was "under the radar" 2-3 years ago (more-less), and nothing happened? I mean, it smells fishy around tether a lot, and it is really weird that that audit didn't take part as it would discover a looooot of failures... In this way, it looks like they (people in power) have let it go until it destroys itself, and potentially makes big harm to crypto in general (what they want from the very beginning)...

The second scary thing is this:

You can honestly think of Tether as a bank

exactly no audit took place after they told us monthly ones would be done. 7 years later here we are still will no real audit and it's the 3rd largest market cap. Plus now knowing only 5% is actually backed with real FIAT and the rest are in short term loans etc. makes me wonder what will happen when there's a mass default on those loans again like 2013 crash. No government is going to bail out tether.

And what has that to do with Splinterlands and the #spt tag?

The big flaw here with stablecoins is that they try to imitate an economic and monetary system that is obviously moribund and almost disappearing, so stablecoins are like zombies walking the streets and at any moment will meet their end.

The real problem is with governments treating crypto as anything other than currency. If cryptocurrencies were treated as actual currencies then people could move into and out of fiat at will and not have to worry about tax ramifications. Then, instead of trading into a stablecoin, you could just trade into a currency of your choice (USD, EUR, CHF, whatever...) and hold your liquidity there. But, until that happens, there is no place to really park your money while waiting for dips, corrections, or whatever other opportunity you want liquidity for.

Hopefully if three or four dozen countries move onto the "Bitcoin Standard" it will force other countries to recognize it as the currency it actually is. I'm not holding my breath but....the wheels are starting to grind into motion.