SPS Is Just Heating Up - Is this holding back Splinterlands?

@bitcoinflood 75
about 2 months ago
LeoFinance 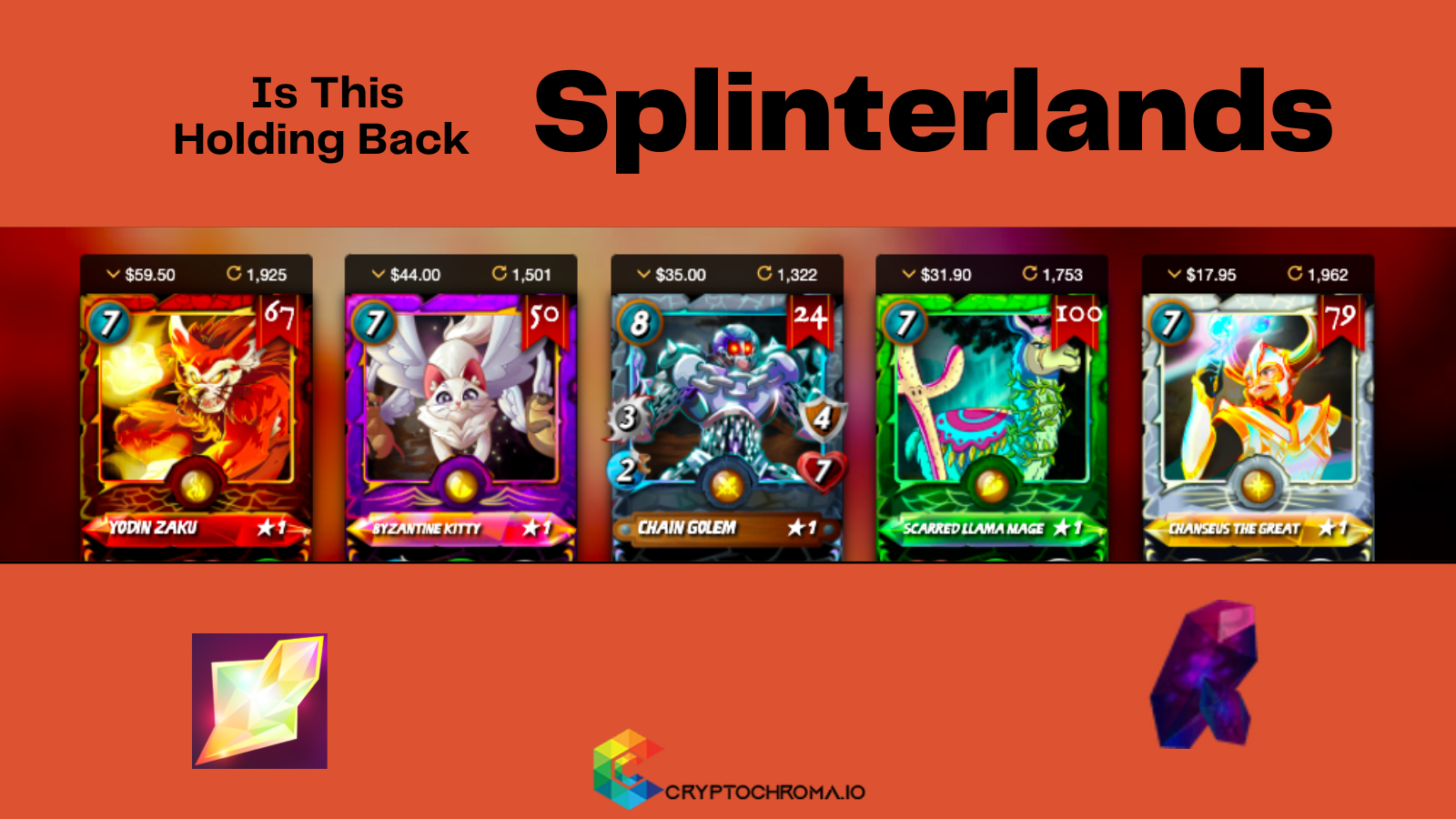 NFT Games Heat Up With This Game

Splinterlands has become one of the hottest games here on the Hive blockchain. With the recent release and news around the governance tokens being released called SPS everything ramped up in a major way.

But we are only getting started!

At the moment currently we are in a 365 day airdrop which is based on "value" points across various account actions and assets.

Starting tomorrow though that starts to change. While the air drop continues on staking will be introduced and with it comes more SPS tokens. 7.5 Million month after month to be exact it's a rather large amount on top of the 1.1 million being dropped daily via the air drop.

Other ways to earn SPS in the future

Outside of the airdrop there is an expected 37.5 million monthly that will be given to players in the shape of the following...

7.5 Million - Earned in ranked battles
7.5 Million - split up between all stakers (If you stake your SPS note that it will take a full month to unstake them at 1/4th every week.
7.5 Million - LP Incentives (still unsure on this one at the moment)
6.25 Million - Land expansion (unknown at this time)
3.75 Million - Oracles I believe these are people running nodes between the various blockchains
2.5 Million in tournament prizes - I'll be honest with you I never seem to take part in these because I forget about them and not like sitting around waiting for them.
2.5 Million - From guild brawls

Is This Holding Splinterlands Growth Back?

One thing that crossed my mind recently was that just before Splinterlands really took off we saw all untamed packs being sold out and nearly all DICE packs. With DEC prices skyrocketing it means that buying the only packs left over which are DEC packs ends up costing new players 3,000 DEC or $15 a pack where the pegged value in DEC should really be $3 per pack.

With only 63,571 Dice packs left it's a rather expensive option to get started in the game. But there is a lower cost alternative I want to go over with you all here in a bit.

Chaos Legion packs I believe are not set to be released for another month. The only real options for new players right now is to buy DEC and then rent out the higher tier cards. It's a far lower cost alternative then trying to build up ones deck at the moment.

What I fear is this high lack of new cards and thousands of new players is causing many to back away and not join in at the moment.

What I'm very excited to see is what DEC will be pegged at come later this month and how much Chaos packs are going to end up costing. Will we return to normal pegged levels or will things still be skyrocketed in price?

@sinistry 58
about 2 months ago (Edited)

We still have land and boss fights on the horizon... I don't think it's slowing down for the rest of the year and by then it will be widespread and popular enough to rocket the gaming world into the play2earn modeled future. :)

Agreed just feels like there should be more card packs here soon otherwise people might up and leave. That or push the card rental hard right now.

I think the rentals hard being pushed hard and it seems to be working.

I'm still trying to figure out the rental markets and leverage that. It does provide new players with a much cheaper option than is currently out there.

But yeah, DEC prices have really put people out of the market for DICE packs..l.Not sure what the remedy would be, but I'm hoping the excitement continues.

I'm thinking about joining Splinterlands and the rental option looks like a good way to get an edge at the start.

I have been wanting to buy these packages for a long time and they are still out of stock, and although renting is a bit expensive it is still for me the best option to get on the train faster.

But I have a question: Which one gives more power points, summoners or monsters? or does it depend on their rarity?

I believe cards get their value from how much DEC they can be traded in for so more rare the better and from what I can tell summoners are about 10x more DEC. There for sure is a short supply of new cards right now so I'm wondering if chaos packs will release sooner than later. Otherwise you might have a solid month still to wait and only have DICE packs for now.

@rentmoney 70
about 2 months ago (Edited)

My take on the DEC USD Price: DEC going back down to or near $1/1000 DEC is linked to the price of SPS. When the cost of DEC outweighs the benefiit of SPS dropped for holding DEC the USD price of DEC will come back down. Depending on the burn rate of the new edition of cards. If DEC is still sky high in USD price it might make sense to burn the new edition for their DEC worth. That will also put presure on the DEC USD price to drop down.