Why Proof Of Brain (POB) Is So Powerful

bitcoinflood in LeoFinance • 2 months ago 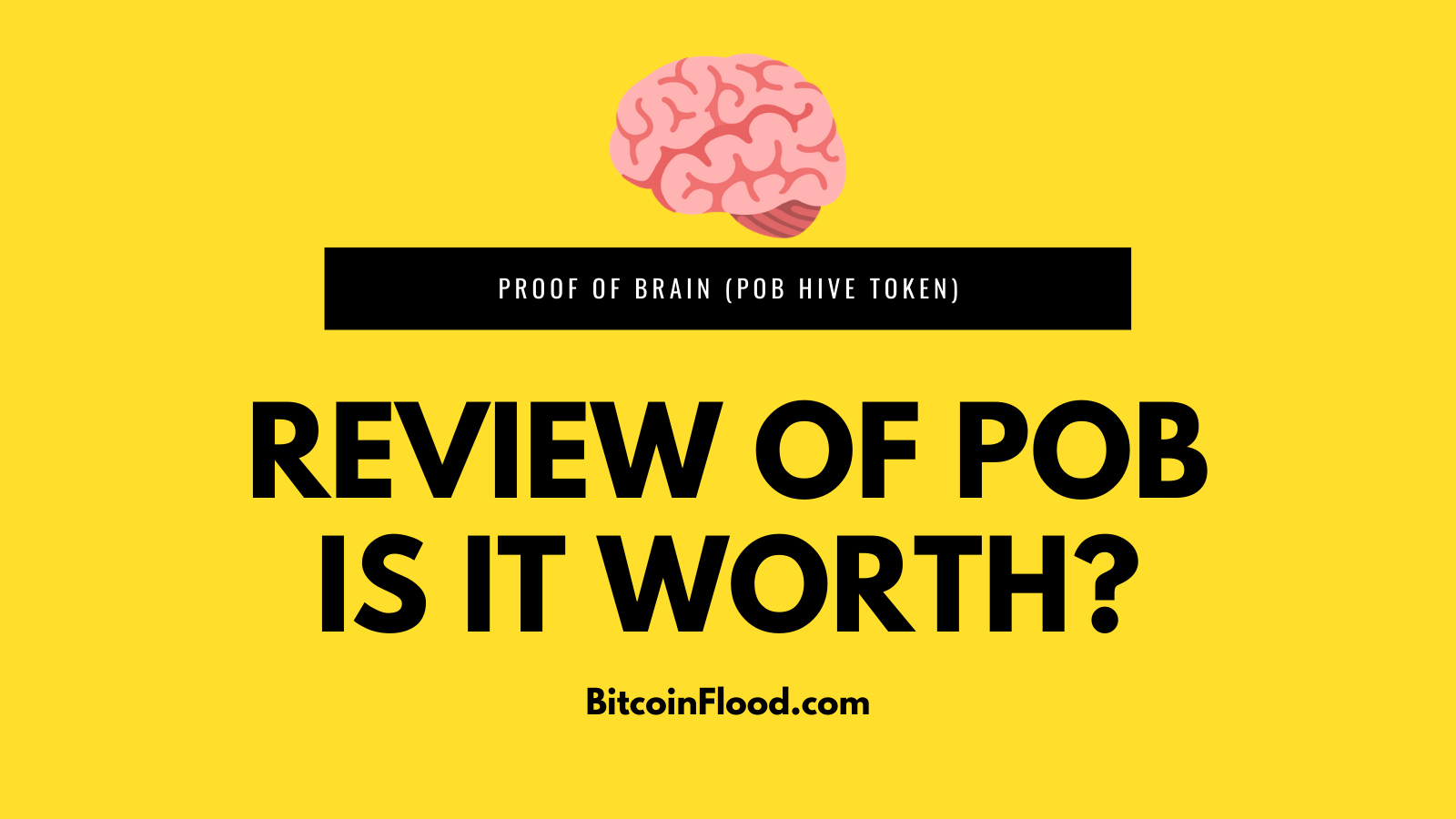 If you haven't heard yet the token and community around Proof of Brain is legit and growing in popularity.
In fact as of writing this right now it's blowing away the price of hive and I honestly see it moving up even higher than what it currently is.

What Is Proof Of Brain (POB Token) ?

In short you can think of POB as being the early days of Hive/Steem when it was first launched. I'll admit when I first heard of the platform a few weeks back I jumped on it as I've always been curious myself what a system like this would look like and how it would react.

Proof Of Brain (POB) Token can be traded on Hive-Engine or LeoDex.io it is a tribe token of Hive. POB is 100% Proof Of Brain which means the only way it can be earned is from posting and curating content that has the proofofbrain tag such as this post does. This means by upvoting this post you will earn POB curation rewards along with a number of other tokens.

It also combines the reduction rate as we see with Bitcoin in which every 4 years POB token for rewards will be reduced by 50%. Now that's a long time away but imagine of this thing really takes off and you've been stacking your POB tokens for 4 years and the halving happens. You'd most likely be sitting on a huge amount of this token with a 50% reduction in supply which in theory should drive prices up even higher. With that power though you should wield it with caution.

Treat the platform how you would want it to be treated. Voting for crap posts, comments etc is going to lead to a reduction in demand for the token. As an owner of POB tokens you are a stake holder and the actions you make such as the content you produce and the curating you do directly reflects on what you deem is worthy of your upvote and what you "allow" as acceptable content.

As a stake holder that means you should be vested into helping increase the price of the token by talking about it, helping others, voting up quality and so on.

In my expert opinion YES, it goes to show you what hype, value and continued talking about a platform can do. It's a solid experiment and it feels good to be at the start of it. Honestly jumping in right now and taking part wouldn't be a bad idea.

The community honestly seems awesome so far. I've used their front UI a few times and while it's the basic cookie cutter design for now it does have a very active community on it who are engaging and taking part.

Overall the project is promising. Limited supply, reduction in supply is going to make supply lower and lower. However unlike bitcoin is as a staking aspect to it as well where tokens are locked up as a POS/POB further reducing the supply of the token. All of these things reduce supply and as long as demand continues to kick in this thing could seriously moon!

It's an interesting tag and I don't think there are any limitations on using the tag. So I have been putting it on my actual posts but the lack of liquidity on HE is a bad problem. There are just too many people buying and not enough people wanting to sell. It might be one of the tokens I might become a whale in (currently at 635 staked).

Nope no limitations as far as I know. being that it's fully POB means we as a community get to decide what to vote on or not.

It's nice to see that new tribes are coming to hive with a sound tokenomics approach. I think the first generation of tribes are struggeling with a supply that is simply too big and difficult to limit.

When you have a concept like POB, that can only grow thanks to curation, the supply increase is quite amazing at the beginning. Simply because there are so few tokens out there. It's therefore quite easy to become a whale if going in early enough. The fact that there are no miners and no airdrops, makes it a very interesting experiment.

Yeah some of these others where you earn like 400 tokens for a post or more just seem mind boggling lol. Plus they don't seem to attract as much hype and demand. I guess when you have a single token worth 0.01 and another worth $1 even though you get 100 more of the $0.01 one and make just as much it's not as exciting. Totally agree it's easy to become a whale on these new platforms you just need to be active, catch wind of things and jump in asap.

I've enjoyed my short tenure on POB so far, there are a lot of active people on here and had some great conversations already with a few folks. If you have a brain, get involved!

There's not much to the site but it's not really the site that makes or breaks a platform it's community and demand right now POB has both.

Can't argue with that, all seems very cool!

The bitcoin backing really made it more exceptional and eye catching. I was glad I got in early and was able to keep growing my stake everyday.

The good thing is that everybody ir getting rewards, been able to curate, unlike community where only the once who have been able to buy more tokens, upvote only themselves. Here on the Pob, rewards are evenly distributed

You made alot of valid points,awesome post from you ...@bitcoinflood

I've been using the tag for quite a while. Interesting project.

I hope the community can grow a lot, I am trying to do my part with my curatorship, but it depends on all of us bringing ideas on how to implement the project, and focus on good posts

I hope all right for all of us

@vempromundo you are doing a good curating job sir...

It's a promising community, there is no doubt. I hope they can continue to develop it. I'm curious to see what will come out of it.

POB has a potential to become next big tribe like leofinance

I feel the same. A new UI and usecase will really take it to new heights.

I have been staking all of the PoB that I have been earning over the past couple of weeks. I want to get some big bags. I don't want to miss out on the early stages like I did with Leo. I am really excited about PoB and where it has the potential to head.

really like to hear from new tokens like this. although, being very new, I did not understand on which site I can go to to prove my brain ;)

Thanks for the write up, I noticed I had some POB tokens and was wondering what they were for, must have missed the memo..

Hi @bitcoinflood, you were just shared some LUV thanks to @jackofcrows. Having at least 5 LUV in your wallet enables you to give up to 3 LUV per day, for free. See the LUV tokens in your wallet at https://hive-engine.com or learn about LUV at https://peakd.com/@luvshares

POB is a very interesting concept. I hope it becomes bigger than HIVE!

That's interesting but it will take a lot of time and effort since so many things are happening on Hive at the moment and for the very fact that POB is built on Hive.

We needed this to be honest. It shows what could have happened to Hive if it was completely POB .

Have been involved with it from day 1 and having a blast.

I'm on board with the similarity to the bitcoin halving. Although i find all the same issues with these type projects. For example they often times focus on tokenomics and not demand and urgency. So with cloned front ends of one another it becomes very similar to the other tribes. Everyone burns and decreases supplies. However often times there is limited focus on the brand and network effect.

The bitcoin myk project uses a similar model to the bitcoin halving and the supply is decreased against transactions giving it a similar effect to the halving. Where it's unique from other projects is bitcoin myk gives it's tokens to the btc network and the unclaimed tokens are given to the public in the form of ubi.

Using the popularity of ubi to the grow the network. Although i don't agree with pob's algo of using stake to control the network voting etc.,. I do agree with the structure of the blockchain and transactions so i find certain aspects of it may be necessary.

However the differences are btcmyk obviously doesn't have miner inflation. What i like about the pob, project is although it somewhat focuses on the posts and content. it seemingly doesn't focus on it in idea for value as much as the other projects. The other cloned projects seem to focus on inflation and the "belief" the posts carry an actual value. As content is free online i think the value of the post are probably around zero.

So the focus is really in attention value. Many cryptocurrencies have shown us that what gives them value has very little to do with the actual " commodity" for lack of a better word. So the relationships and interaction drive the value of posts not so much the posts. So focusing on the value of the content i think is a misunderstanding of how cryptos work. The focus shoudl be attention value and how to expand the network further.

btcmyk gives it's value over to the btc network which in term like osmosis causes it to gain the btc network as well as, being multichain. However, in some sense i could see pob very promising but it will depend alot on the branding and network effect, so it will be necessary to pull itself away from the other tribes.