The microchip crisis that was already brewing.

As a result of the pandemic declared by the WHO in 2020, many of the companies that we previously knew as one of the great generators of face-to-face jobs were forced to change their modality to work from home. However, to carry out this type of activity, certain requirements are necessary, among which you must have some kind of computer; in the most important cases, they must have special characteristics appropriate to the position to be held.

All this has resulted in an increase in the sales of computers and this in turn is noticeable in the microchip sector, which are the fundamental part of them. However, this panorama was calmed because companies that manufacture electric cars, due to their low production due to the confinement of people, could stop requesting this type of integrated circuits that they use in intelligent vehicle management systems.

At this time, given that in some countries they are already managing to return to daily life on a regular basis, smart vehicle manufacturing companies, such as: Tesla, BYD, etc. They have decided to reactivate production, it is for this reason that the demand for semiconductors has increased; but only under the premise of the number of vehicles sold each month. However, companies like Apple, Sony and other companies that specialize in another branch. As the production of telephones, video game consoles, among others, they request more of these components in large quantities because they can keep them stored according to their needs.

It is for this reason that many of the video game consoles have delayed the production and sale of them, of course, this is also given by the boom that is currently being experienced with cryptocurrencies, such as: bitcoin and ethereum; which given the sudden increase in their value has boosted the sale of mining machines, these are based on GPU devices, such as graphics cards.

Companies such as Taiwan semiconductor and Samsung, which are the largest microchip producers in the world, are being crowded with orders, however, it is an uncomfortable situation for them, since they are not prepared for such demand, and the construction of each additional microchip plant, has an estimated time in developed countries of 18 months to start up.

It is for this reason that countries like the United States have made the decision to implement the construction of the same in their spaces, in order to avoid dependence on these companies. Since, many production lines have had to be paralyzed given the scarcity of this type of resources, which is essential when manufacturing electronic products.
We can observe how currently electric car companies, such as: Nio and Tesla, have had to issue official statements in which it is announced that some of their production lines are paralyzed; which translates into monetary losses for these companies, due to the fact that the shares within the stock market fall.

The same happens with companies like Apple, Microsoft and Sony, which have had to delay the production of their mobile devices and video game consoles. Which, under normal conditions, would not experience this type of event.

In contrast to all this, we realize that some sectors may benefit from product shortages from giants such as Taiwan Semiconductor and Samsung; since, companies like Nvidia, Intel and AMD, which are owners of production of this type of artifacts; they can speculate on their prices, raising them to twice their value.
Contrary to what Apple is used to doing, which could experience a stain on its reputation if it decides to apply this type of strategy, because it has been characterized by selling products with accessible prices and without suddenly increasing the value of the same. Given the shortage, that's when these companies can play around with these prices. In their position of owners of a product that is of great need for buyers, they can put them in a somewhat uncomfortable position, in which they will be forced to pay high prices if they want to buy the products for the sake of conserving or get a better job.

Unfortunately, this type of crisis can take time to resolve from the middle of the year 2021, or even until the year 2022; since only companies such as Taiwan Semiconductor have allocated 50% of their production to the construction of plants for the manufacture of microchips.

This type of phenomenon is tilting the balance from a totally different side to the one we were used to, giving the now analog circuit companies an advantage within the market, resulting in an increase in prices without affecting their shares and therefore On the contrary, large companies begin to be affected, after a period of isolation much greater than that expected since the implementation of the pandemic in 2020.

To show this, we have that, in online distribution companies, if we review the prices of products such as the graphic cards of said companies, these have increased their monetary acquisition value from approximately 100% to 150%; They do this in order to generate more profits through the exclusivity of their products. In another branch of sales, such as vehicles, this has led to the fact that automobiles that run on conventional fuels are experiencing an increase in sales; since they lack the need to use this type of electronic components to carry out their usual processes. This is how companies like Volkswagen, which has great renown over the years, has been increasing its sales in sectors throughout the world; to meet the demand for vehicles.

However, this is a crisis that was already coming, because, given the lower production of electric vehicles, the power generation sources can satisfy the demand for these, but by increasing production and due to the lack of chargers Quickly, a future energy crisis can begin that affects all sectors.

we have enough microchips.

mmmm I understand, let you look a bit about what is happening in Taiwan regarding the problem with water and how this will affect more what I left up there, but don't worry.

The reason is sometimes subjective!

just get an excimer class laser and some tube optics, pump ur water in desalinate

oh you mean with the fishing or navy ships?

In this era of hyperinformation it would be a shame not to give you the opportunity to search a little more than simple lines, in the meantime we will continue to attend to other things to do, greetings!

it was project with napa lawyer and chinese cities wanting lasers, also israel and uae all wanted the laser only china got it , back during bush administration, 2007 etc and before, and they sai dthey used optics and a excimere laser to pump dirty waste water of any type through alser to partticluize anything plasma boom maybe even radioactive particles get atomized honestly , probly helps.

An excimer laser, sometimes more correctly called an exciplex laser, is a form of ultraviolet laser which is commonly used in the production of microelectronic devices, semiconductor based integrated circuits or "chips", eye surgery, and micromachining. 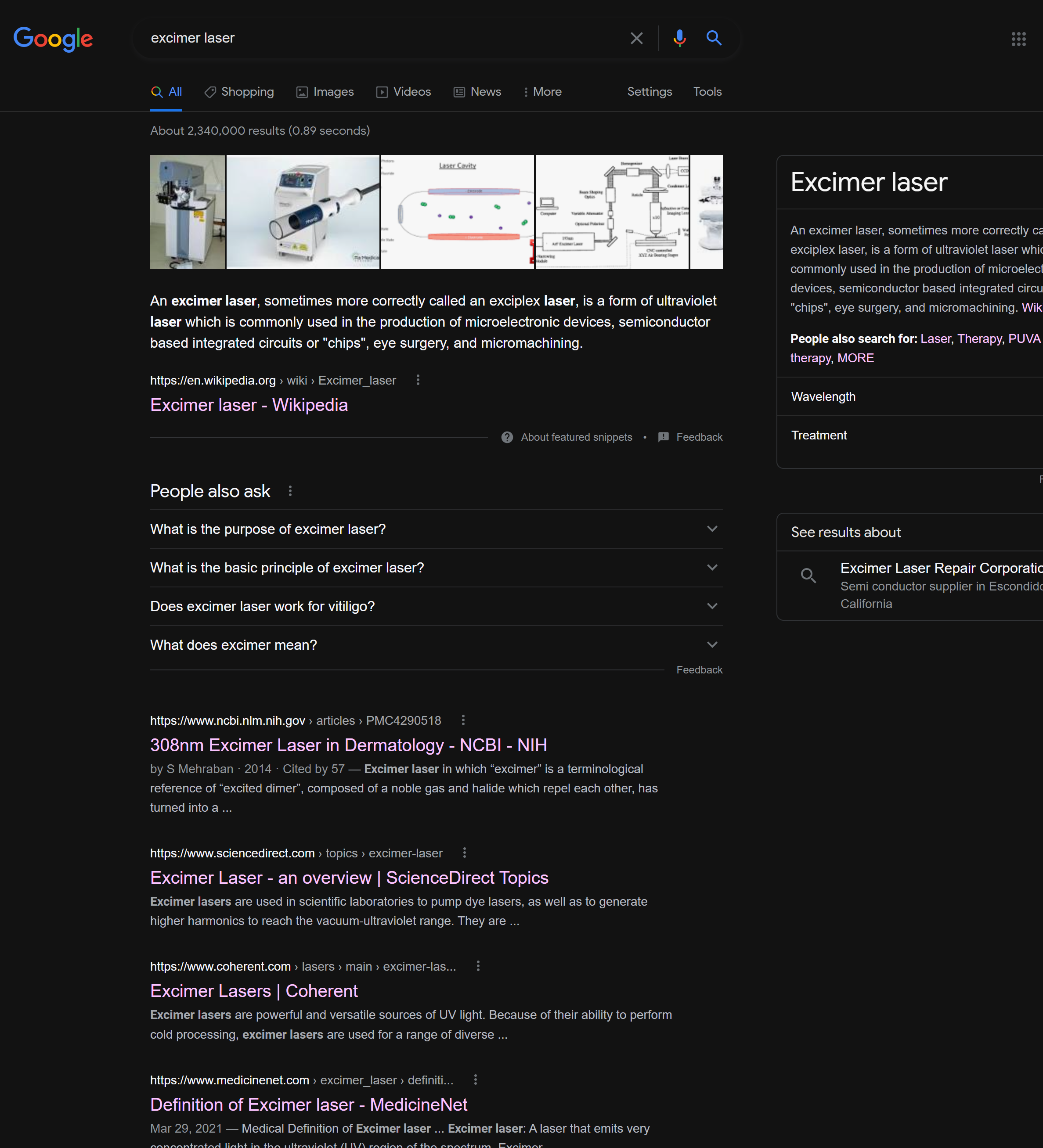 Your exhibition is very nice, I think it would be better to take it to a post.

I have no idea where you live but there is a crisis of these microchips, in the same way you must question everything, so it would be great if you search a little and then tell me what you find.

It is strange to think that there is no crisis when currently buying a graphics card for video games costs 3 times more due to high demand and shortages of components.

Cars on average have 6 or more computers which need microchips. The detail is that the video game and computer industry are more attractive customers for those who sell microchips, so they put aside the automotive sector.

And that's just to cite one of the branches which geopolitically speaking are affected.

I cannot understand your narrative, or the point you want to cover, but I regret that it was because I was looking for news in traditional and manipulated media!
Greetings from the rest!