HBD Transfers To And From Exchanges | Who is moving HBD?

Recently I have posted about Data On HBDStabilizer. The @hbdstabilizer is trading on the internal market, selling HBD for HIVE, trying to maintain the HBD peg.

For this price action to be transferred to the outside exchanges we need some arbitrage to be happening. Buying HBD for lower price on the internal market and selling it to the outside exchanges.
The thing is HBD is not listed on a lot of exchanges. It is listed only on two exchanges: Bittrex and Upbit.
Since Hive is a public blockchain the transfers to exchanges are all available. Let’s take a look who has been moving HBD to and from exchanges, especially in the last two months, since the @hbdstabilizer has been around. 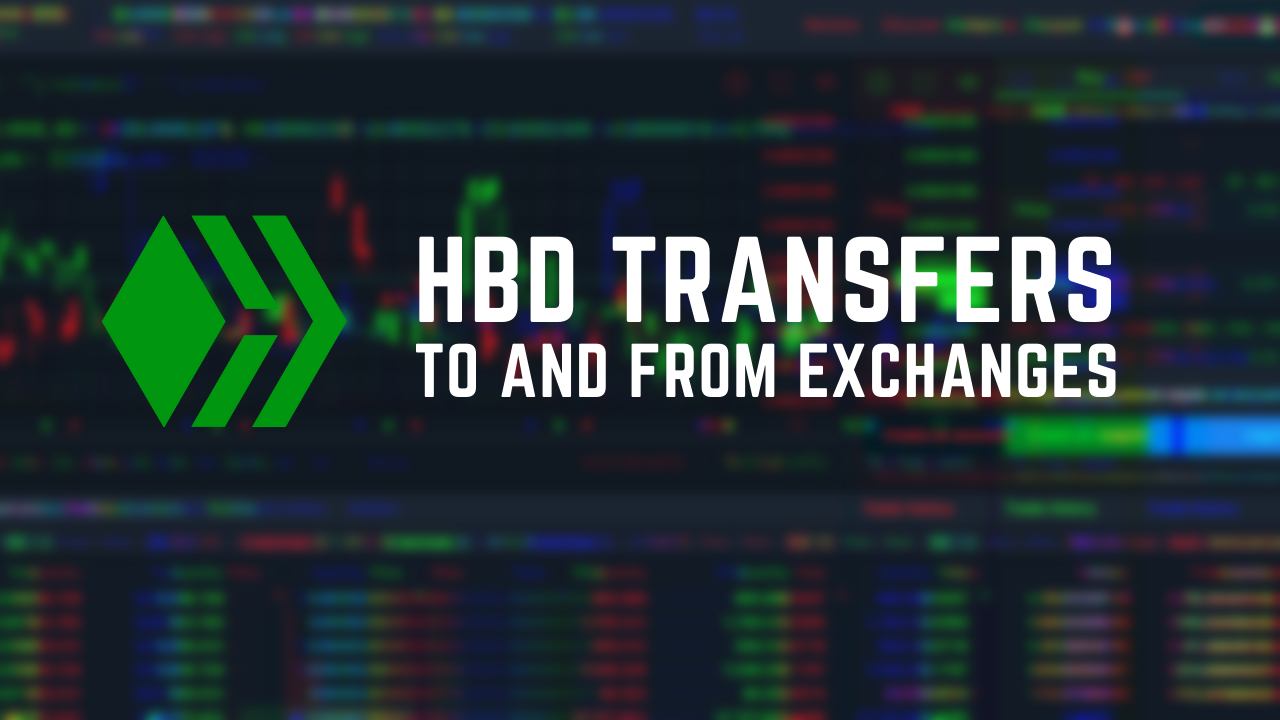 As mentioned the @hbdstabilizer started with operation at the end of February, and we will take some period before that for context.

We will be looking at the following:

Exchanges taken in the analysis: Bittrex and Upbit.

Here is the chart for the daily HBD transfers/deposits to exchanges. 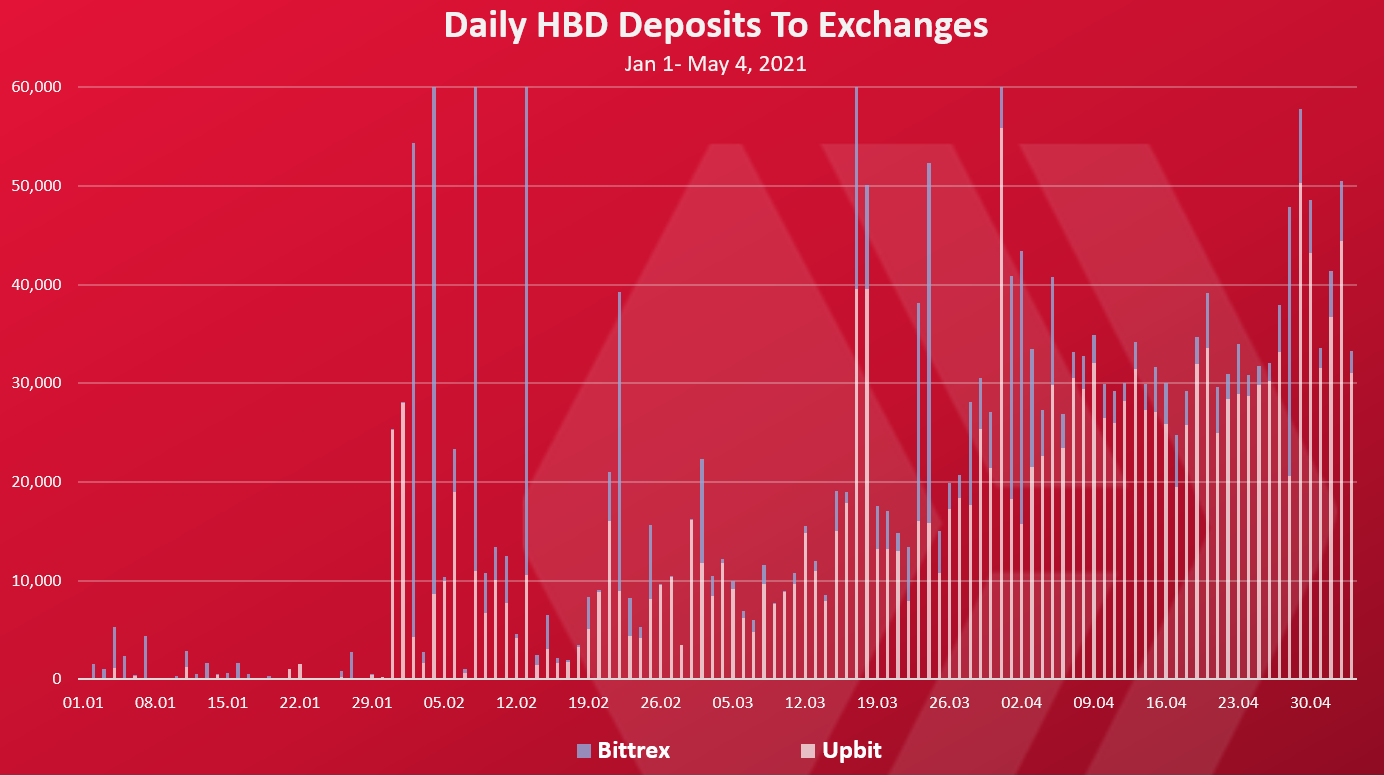 Note: Transfers between exchanges accounts are excluded from the data above.

Who has transferred the most funds to exchanges? Here is the chart. 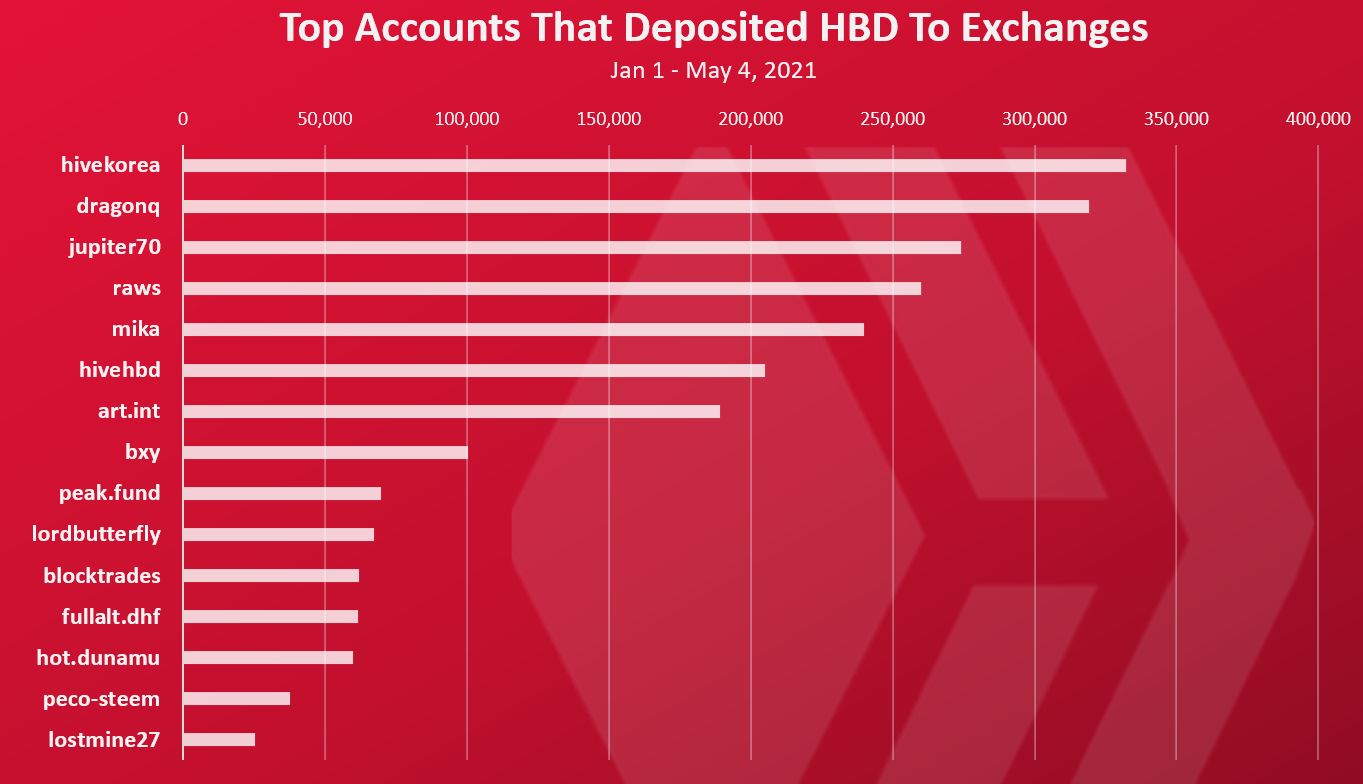 The @hivekorea account is on the top with 330k HBD.
The @dragonq, @jupiter70 have also transferred a lot of HBD, close to the 300k mark. If we take a look at these, they are constantly transferring HIVE in, and transfer HBD to exchanges.
The top accounts are transferring HBD to Probit, basically arbitraging between the internal market and Probit.

What about withdrawals from exchanges? How much HBD has been withdrawn and by who?
Here is the chart for the daily withdrawals to exchanges. 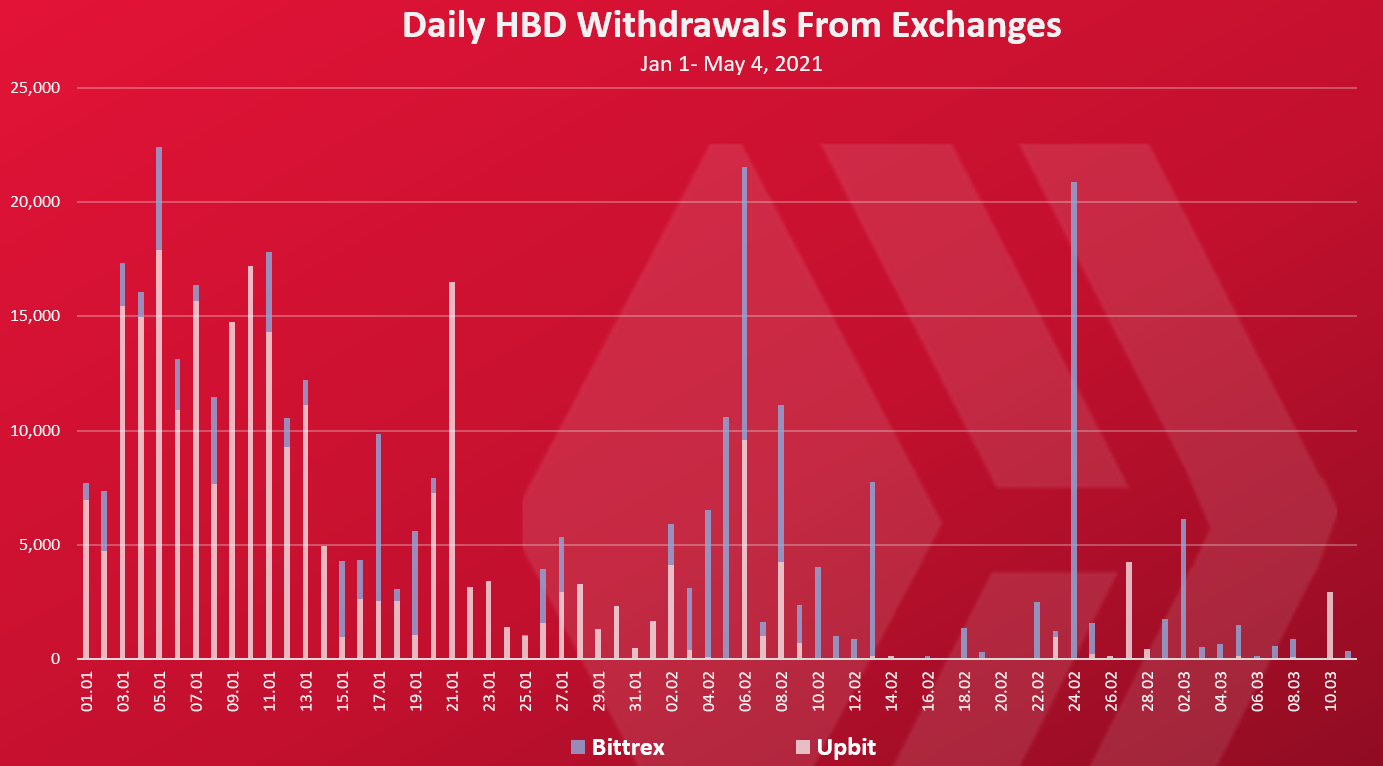 As for the above, here as well the transfers between exchanges accounts are excluded.

Notice the smaller amount for withdrawals then deposits. HBD is needed on exchanges now, and since the start of the year the trend to withdraw HBD from exchanges is down, to almost non excitant in the last period.
A total of 580k HBD, was withdrawn from exchanges, most of it in the begging of the year, and some random spikes later.

Top Accounts That Withdrawn From Exchanges

Who has withdrawn the most HBD from exchanges? Here is the chart. 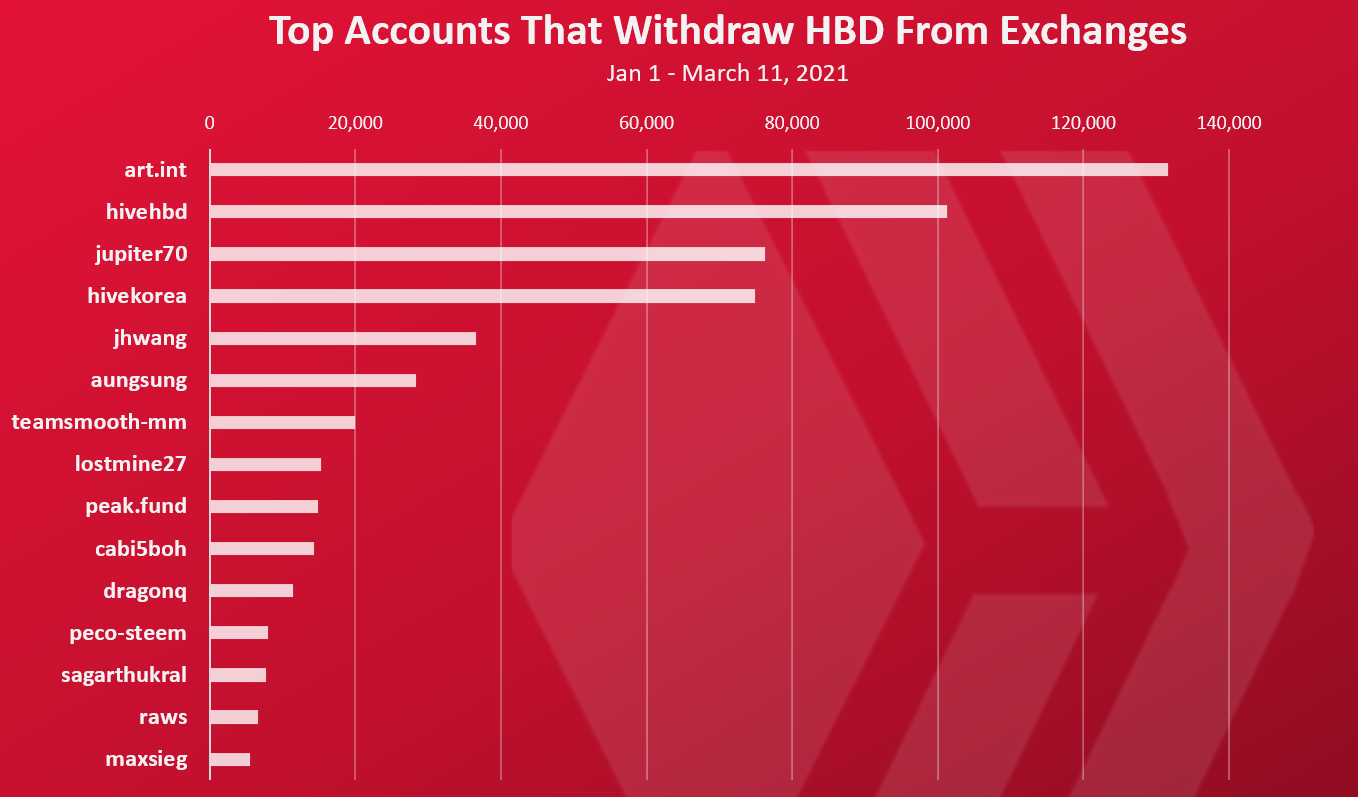 The @art.int is on the top by the HBD withdrawals, followed by @hivehbd and @jupiter70.

The amount of HBD transferred to exchanges has been in a constant steady growth. This is mostly because of the @hbdstabilizer that is providing HBD on the internal market, that then is being used for arbitrage mostly on the Upbit exchange. The amount of HBD transfers to exchanges has reached 40k HBD per day, starting from under 10k. Multiple accounts are transferring HBD and arbitraging.

The amount of HBD transfers to exchanges has reached 40k HBD per day
So are there any gains, to buy it internally and sell on exchange ? And who buys on exchanges and what do they do with these HBD, since withdrawal volume is low ?

So are there any gains, to buy it internally and sell on exchange ?

Yes there is, mosty on the Korean Upbit, but I believe its only for Korean citizens and you need to do KYC to trade there.

And who buys on exchanges and what do they do with these HBD, since withdrawal volume is low ?

Can't really tell, but probably speculators, who expect the price of HBD to go up.

Very interesting stuff. I have a feeling the ones by lordbutterfly are probably to take care of the marketing costs for the initiative that was started through that company. I could be totally wrong though. Thanks for presenting this. Very informative!

My personal hypothesis (which I haven't tested with data) is that, because HBD has low liquidity on the external markets, the folks you listed above are injecting a relatively small amount into buying HBD there to [1] pump up HBD to set up the arbitrage opportunity you mentioned and [2] also pump up HIVE (i.e. perhaps buying up a lot of HIVE just before the HBD pump, then slowly selling off the HIVE at elevated prices that are being sustained by the HBD stabilizer).

That's all just a hunch, but it is based on the the fact that while I was looking at the data on Coinmarketcap after the last spike in HBD, I saw a spike in HIVE that occurred shortly beforehand -- it looked strangely coordinated to me (look at both HBD and HIVE on 4/24 from 6p to 9p CDT).

Basicly playing the both markets ... might be true ... but for the both cases, they need people to come and buy after they did.

I just wonder if it might be some folks who have figured out that a small amount of fiat (relatively speaking) can move HBD a lot (due to generally low trading volumes) and that a high HBD dramatically affects the price of HIVE, especially on the internal markets (partly because of the way the HBD oracle is used for rewards distribution).

In other words, could someone who has a relatively large existing investment in HIVE be using the HBD external market to pump up the HIVE internal market, taking HIVE profits along the way, plus periodically buying more HIVE (low) just before each HBD pump?

Again, just a theory -- needs to be tested with data. Even if a coordinated pre-HBD-pump buy of HIVE is not a real thing, using the low-volume external HBD market to pump internal HIVE (and internal rewards?) seems plausible to me.

Everything you wrote above is possible and probably happening to some extent. Hive has its history with Steem before and the speculators use the same principles for the two tokens. Its the ones with liquid hive/hbd on exchanges that move the market.

Yes, one of the disadvantages (imho) of tokens with significant rewards for staking is that it greatly reduces liquidity, thus making price manipulations much easier.

The @hot.dunamu account belongs to Upbit, I believe it is the wallet utilized when their users request a withdrawal.

Yes it should have been excluded, I guess a small error in the calculation.

What's the point in exposing all these people's accounts?

All these accounts are already known by the more techie people, or if somebody was interesting in this, I just sum it up ... also the accounts were not the only point here, the more important point is the amount of HBD moving around.

You can also buy HBD on ionomy, but I don't like that exchange, they are thieves, I once transferred $ 3.94 in hive to buy blurt and in the end I only got $ 1.12 in blurt, a complete scam!

Ah yea, that to ... quite a small one though