How Is The Ethereum Network During This Market Volatility?| Data on wallets, transaction, hash rate, fees

The crypto markets just dropped 15% to 20% in a day with Bitcoin going to 21k, and Ethereum to 1100. The ATH for Ethereum was 4800, so this is now more then a 70% correction! It is getting rough out there with some projects under real stress.

Let’s take a look how is this effecting the network. Data on the numbers of transactions, new wallets, hash rate and the overall activity. 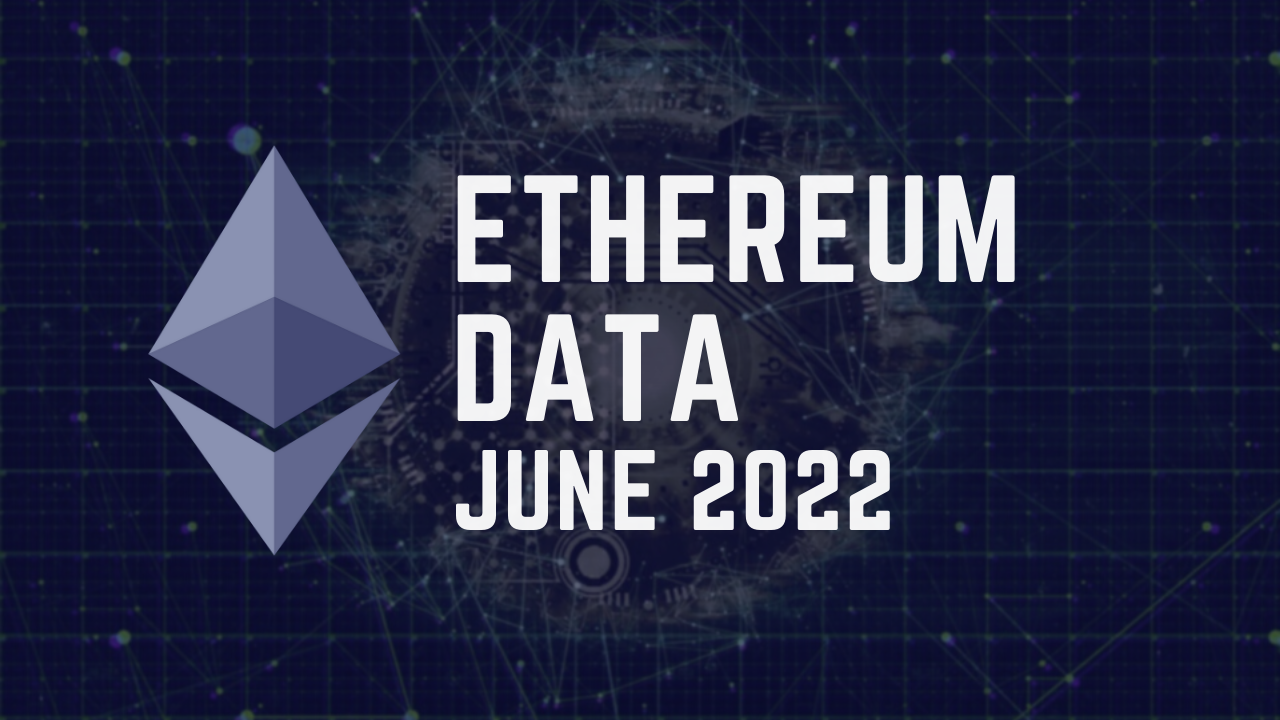 The data presented here is mostly gathered from the etherscan charts.

Here is the chart for the total number of Bitcoin wallets created. 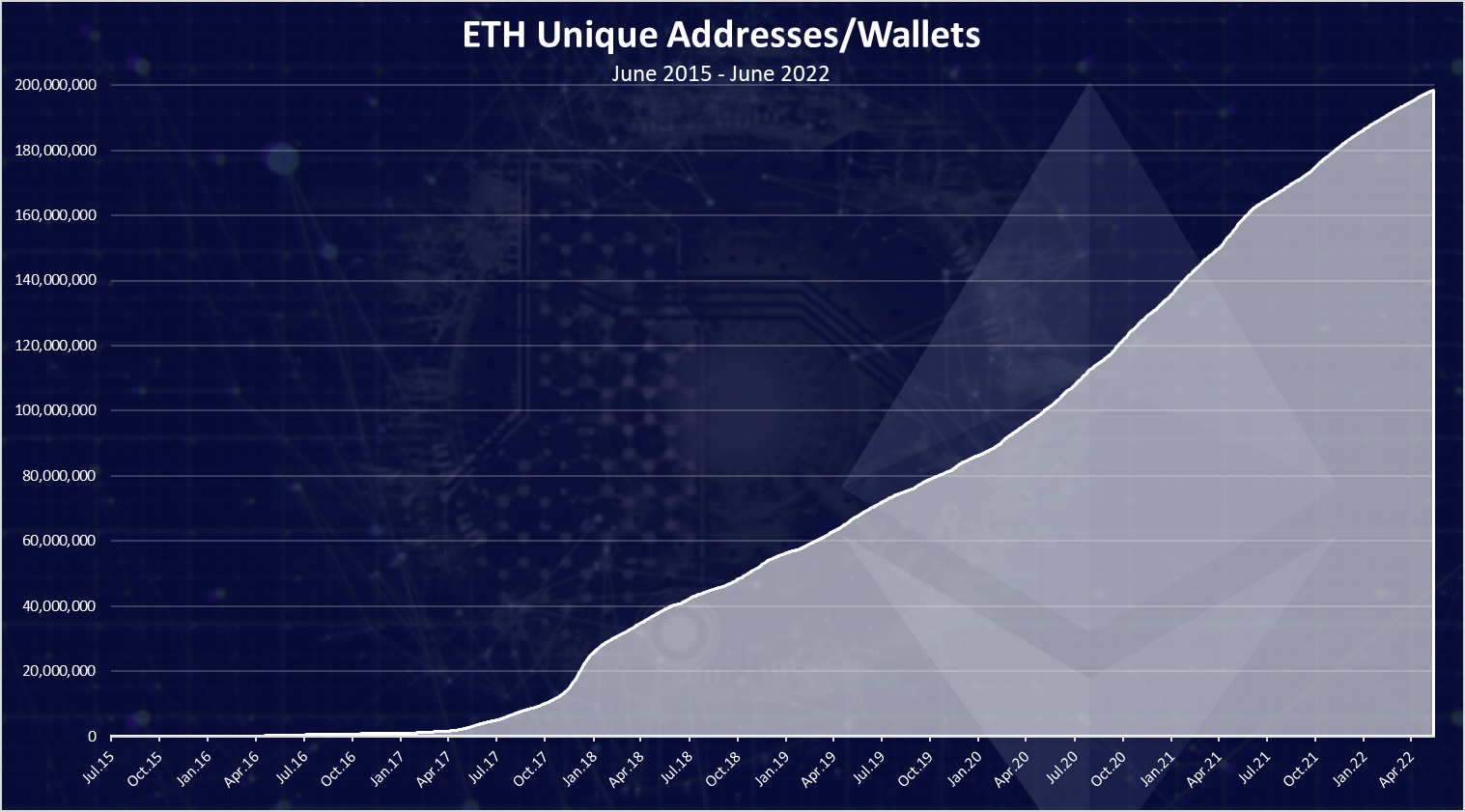 Ethereum is now closing on 200M wallets!
It is the leading blockchain in crypto by the number of wallets. Just a 1M shy of 200 now. For comparison bitcoin is still under 100M wallets.

When we look at the number of new wallets created daily we get this chart. 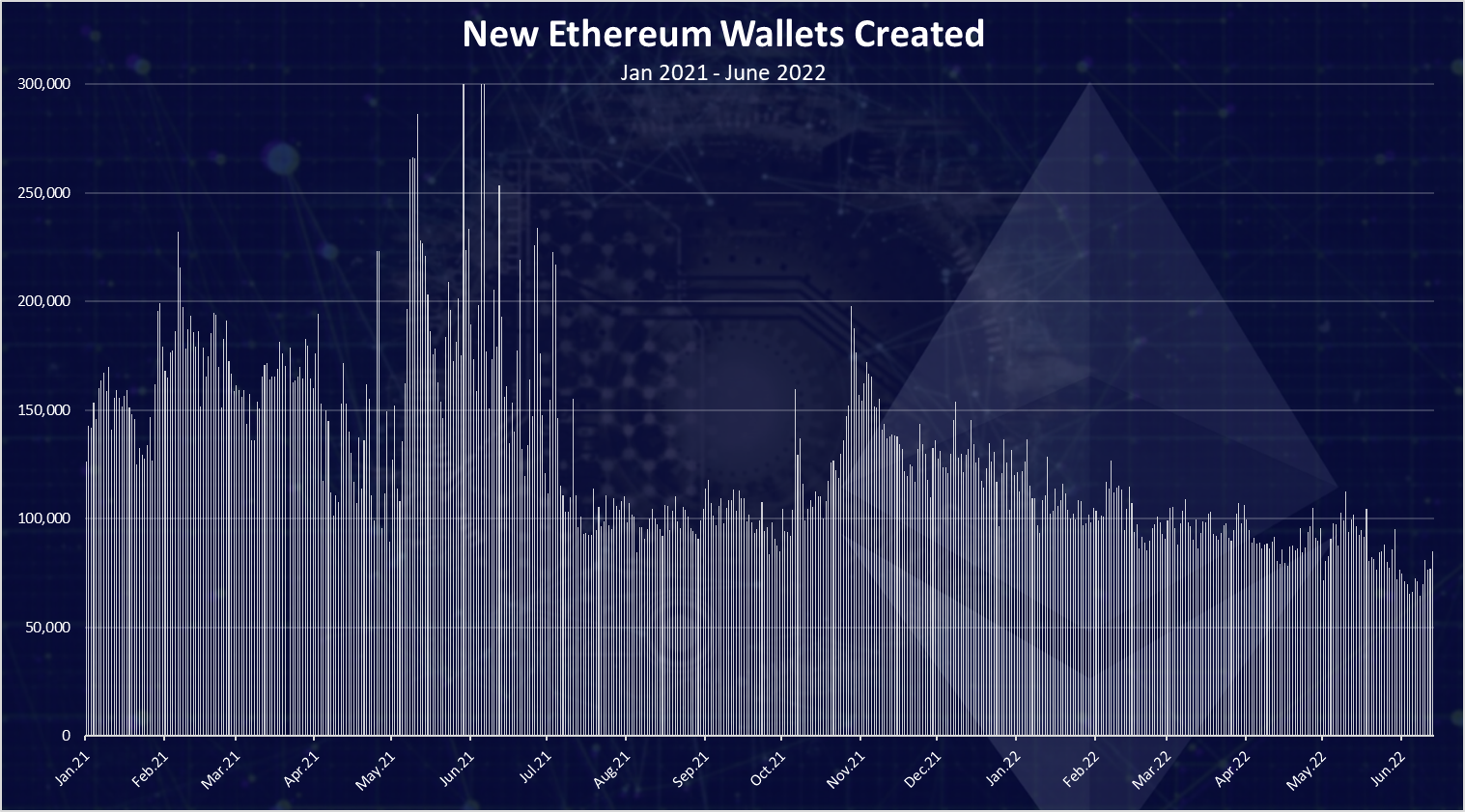 The chart for the number of new Ethereum wallets per year looks like this. 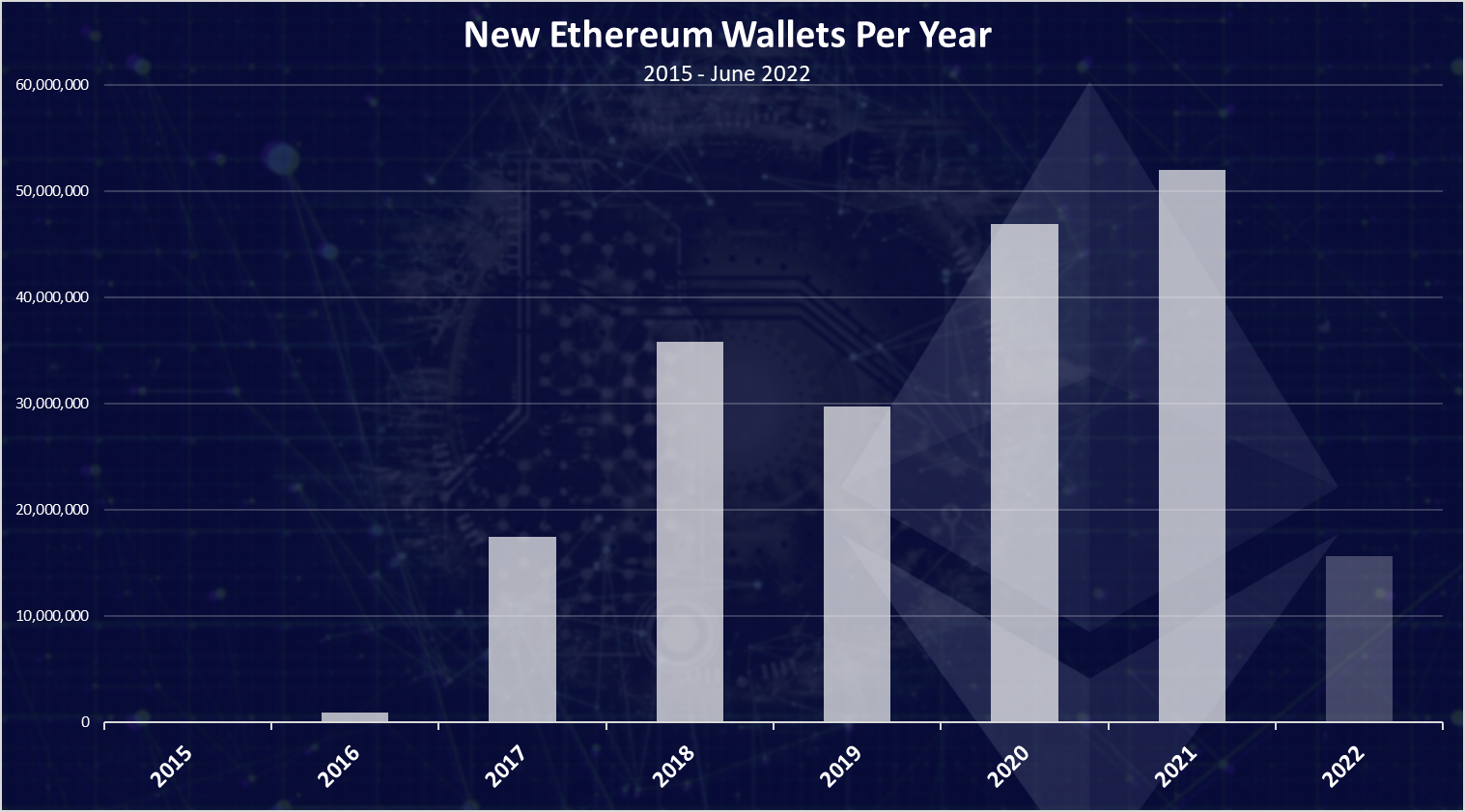 How many of the are being used?
Here is the chart. 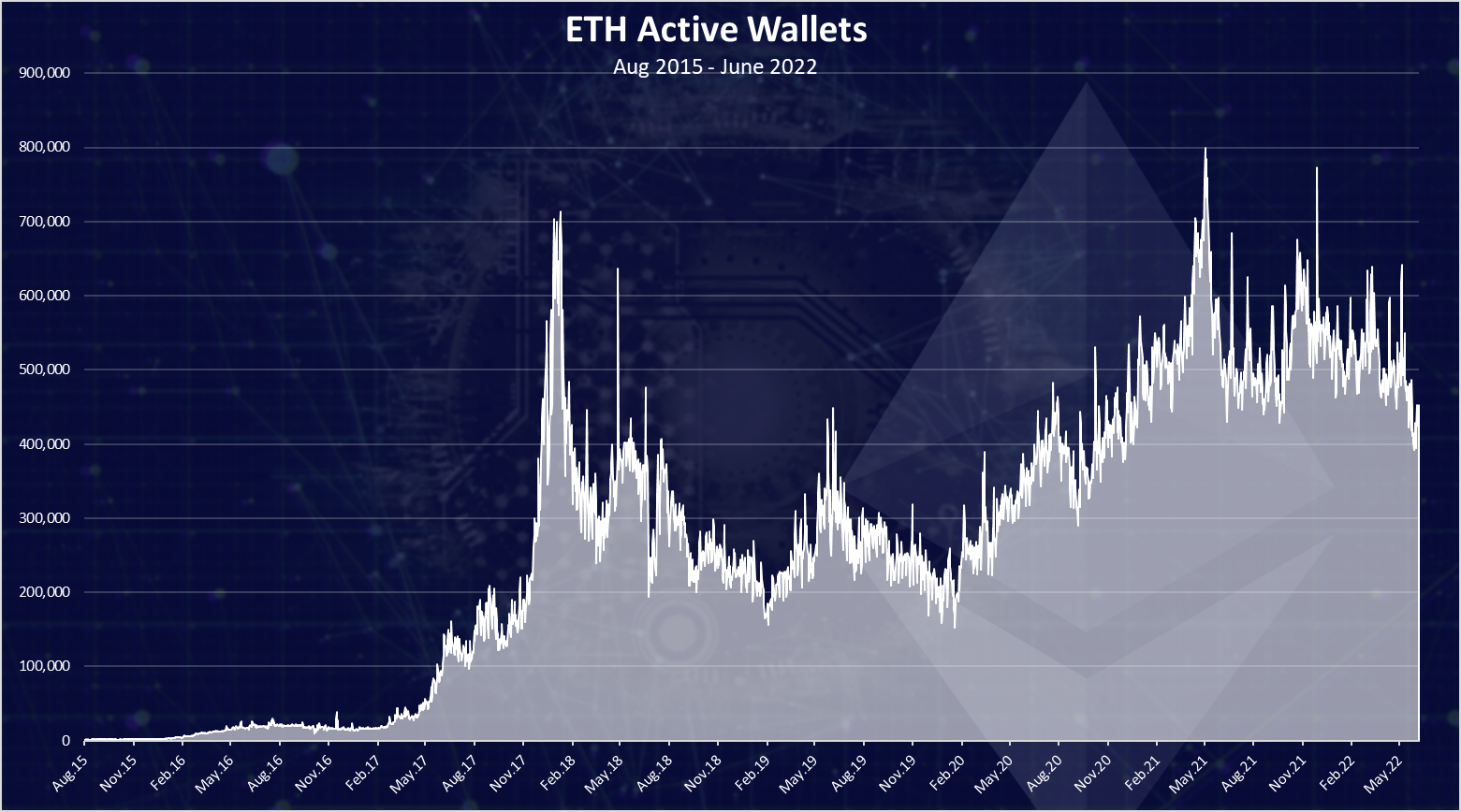 If we zoom in in the last two years we get this. 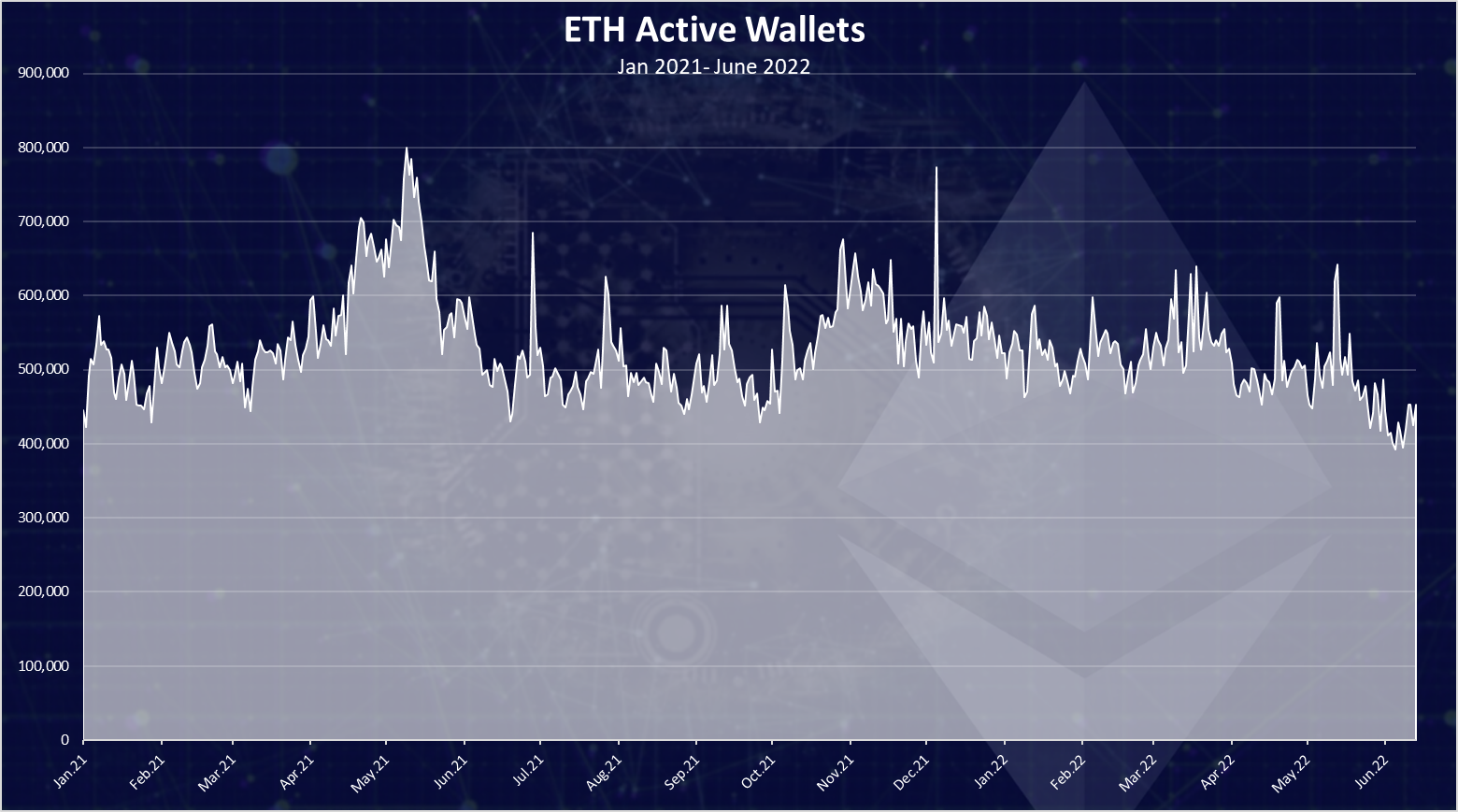 We can see the ATH here as well with 800k touched in May 2021 and a sharp downtrend afterwards. Since then we are in a range between 500k to 600k, with a slight drop in the last month to a 400k active wallets per day.

The activity on the network is mostly represented by the number of daily transactions. 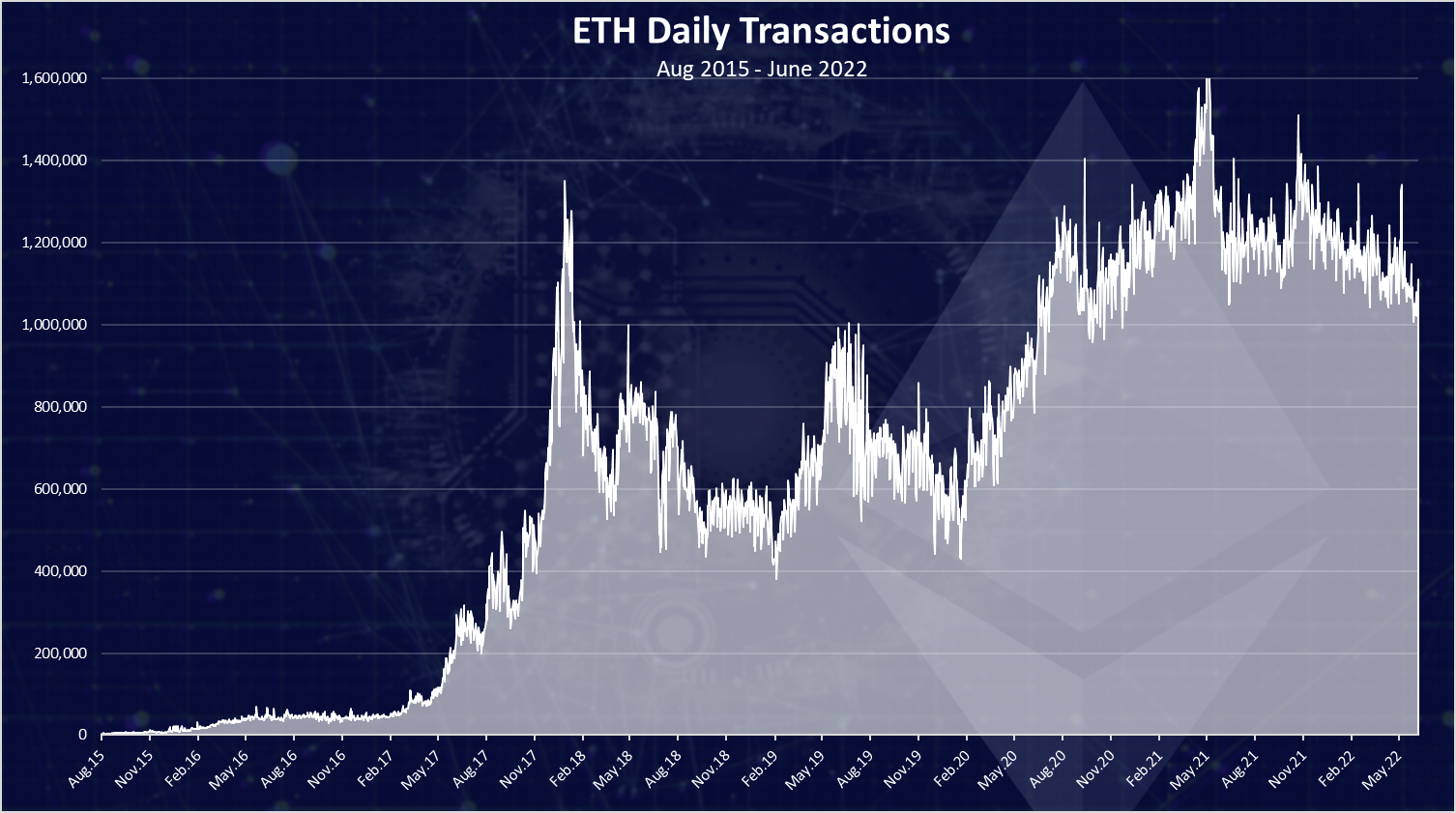 Ethereum has been know by its expensive fees, so all the above have paid some nice fees to be included, especially in the last two years. We can notice that the ATH was reached in May 2021 with transaction number of 1.7M in a day. This is probably some of the technical capacity that the ETH network can handle, although it depends a lot of what type of transactions are made as well, since some of them require more resources then others.
We can notice a drop in the number of transactions in 2022, but still above 1M per day.

The network security in a proof of work chains is measured in hash rate, or how difficult is to mine. The bigger the completion, the higher the hash rate. 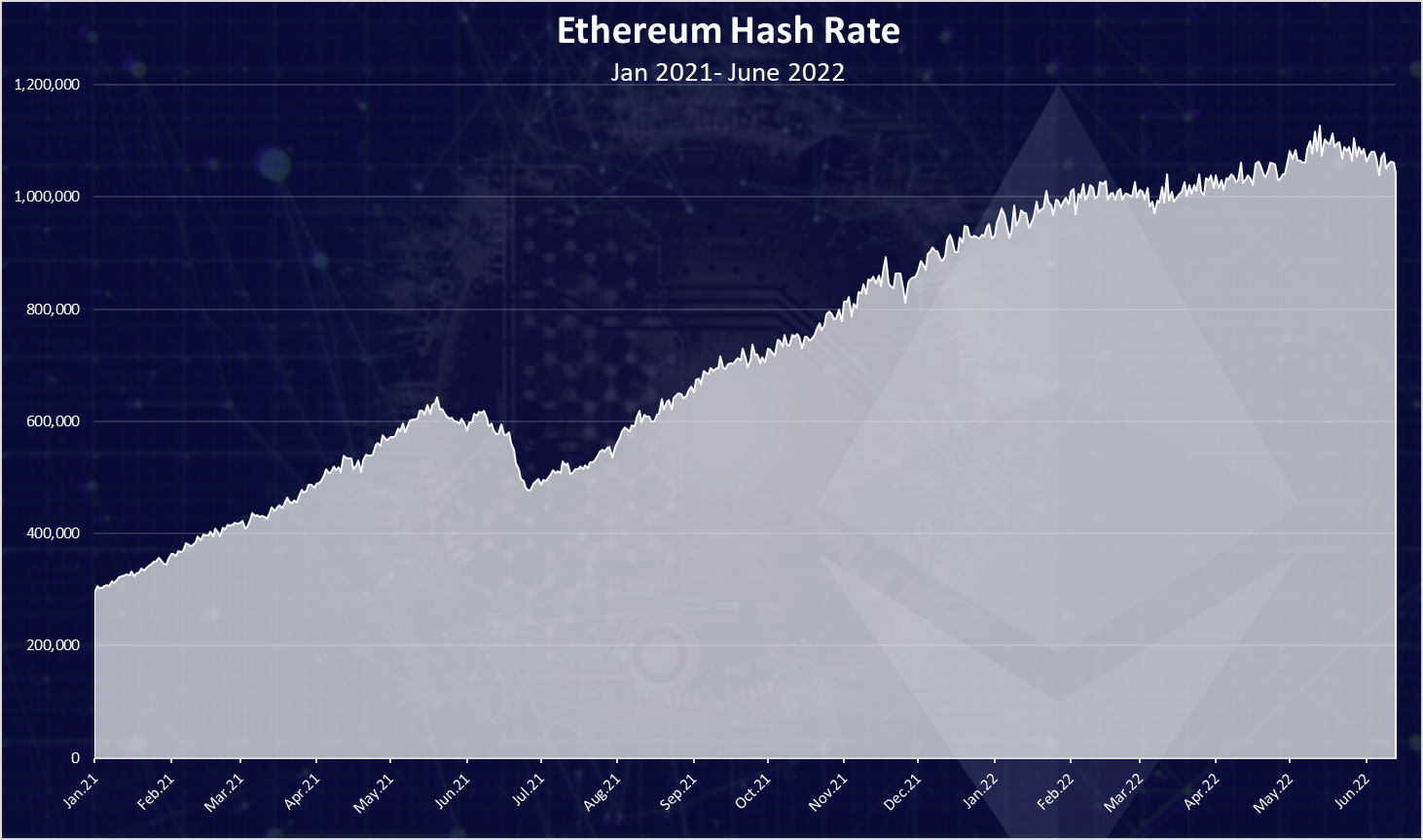 The hash rate has been going mostly up, until June 2021, when we can see a sharp drop. This is because of the ban on Chinese miners. An increase again since then, and just a tiny drop in the last month.
The Ethereum network is set to transit to Proof of stake, and all the miners will then shut down. Whoever wants to run a miner, or a validator as it is the new name will need to stake at least 32 ETH. We will be following the number of validators and ETH staked then.

A bit unpopular topic the fees. 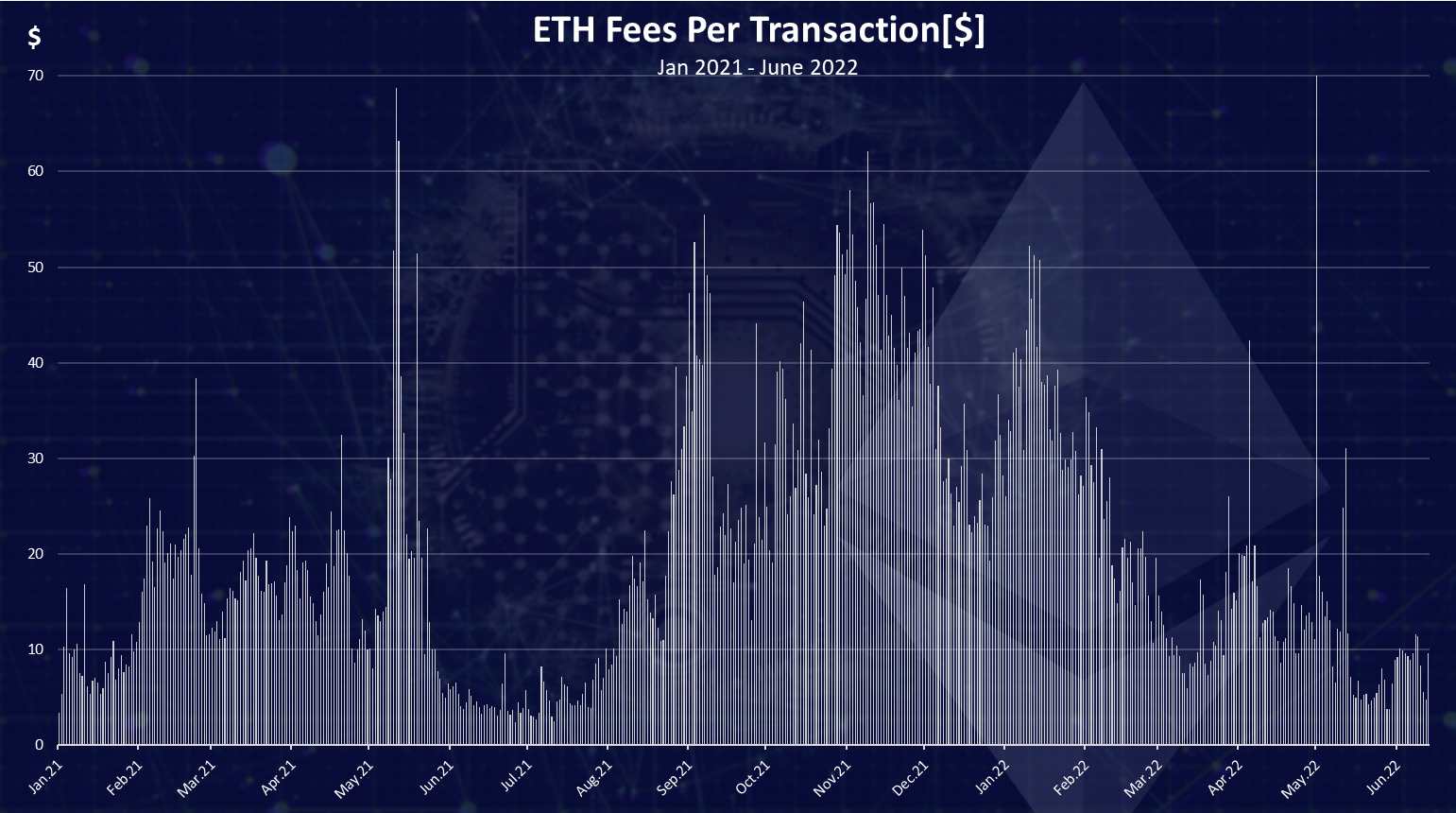 Ethereum has been the blockchain with the highest fees. As we can see from the chart they have been more then 50$ per transaction on a multiple days, and on a few of them even reached a 100$. The ATH was again back in May 2021, then an increase again in November 2021, and a decline in the fees since then. In the last period for most of the days the fees have been under 10$, into the single digit number, that has been a rare thing for ETH. 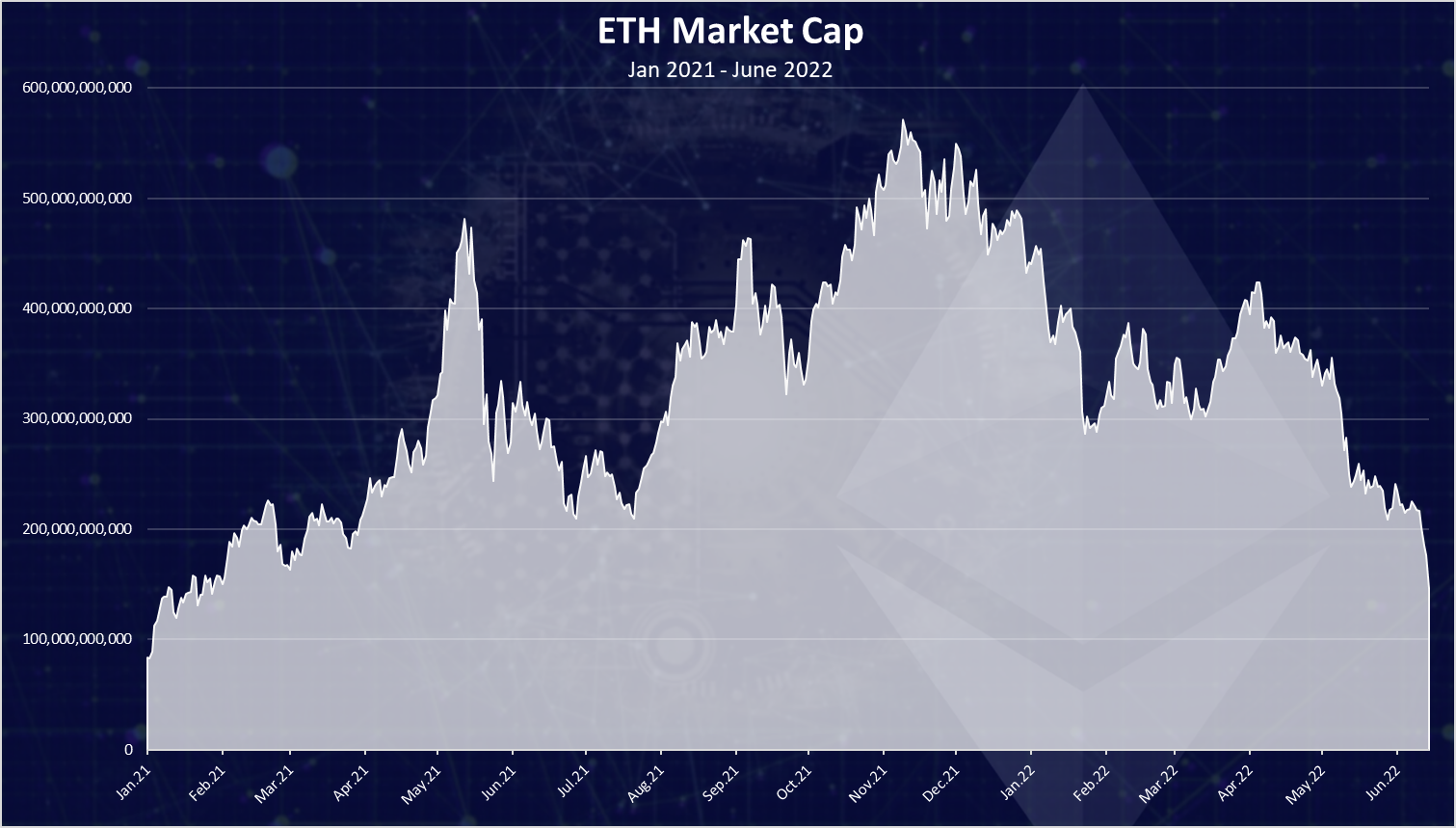 At the beginning of 2021 the Ethereum market cap just reached 100B and continue to grow to more than 500B in November 2021. Since then we have a drop in the market cap to around 150B where it is now.

New wallets are created on Ethereum daily adding up to the current base. ETH is now very close to the 200M mark in the numbers of wallets. There is a slowing down in 2022, but still more wallets keeps adding up. The numbers of transactions, have also seen a drop in the last period. The hash rate has been one of the strongest parameter for the network, and we can barely see a drop in the last month after a long period of the hash rate increasing. One positive side of the numbers going down is that fees are also going down. ETH now seats around 150B

They always have ... just we are in a bit of a rough watter now.

Well that is certainly true. I just picked up some more at 1200. Averaging over time is always the best idea in my opinion

Thank you so much for this data I can see recently that the users are being reduced probably because of the fee or it might be because of the bear market.

Overall, the network looks quite healthy to me.

Meaning there is still demand for ETH!

Sure is ... I just feel some uncertainty with the transition to pos and the growing competition

can't wait to buy myself some cheap ETH, it's the only fun you can have in the bear market besides buying bitcoin of course

I am really glad that the gas fee has been staying most of the time at around $15 for this period. Had done a few things thanks to the low fee environment.