eddie-earner in LeoFinance • 3 months ago

Hello, it is time for Eddie Earner to release a mining token. Done roll your eyes at me, I've been thinking about it from before it was popular but never get round to it. The benefits of having a miner are many and contrary to proper believe a project does need to be a tribe to run a mining token. Any project can create and operate a mining token by using scotbot if they have token worth mining. Brief description of EDS tokens
EDS tokens are the flagship token of @eddie-earner, a project created and operated by @silverstackeruk on behalf of SPinvest. EDS tokens are inflation-proof HIVE income tokens based on a POH (proof of holding) model that remains pegged to 1 HIVE. Starting around 6 months ago, we launched offering a weekly HIVE income of 12% to EDS tokens holders which has since grown to 13.2%. Each week we earn more than we pay out and reinvest the extra to grow the next payout. Think of it like earning 20% on money in the bank and withdrawing 12% of the interest earned and compounding the other 8% to increase your next payment. This is how EDS can continually increase weekly income payments to EDS token holders. It's a simple set up and works well.

There are currently 20,000 EDS in circulation and 480,000 in the mint looking to be released. The plan was never to directly sell many EDS tokens but instead attach them to something and issue them as rewards. There are many ways to do this and it's better to get it right the first time so I've not been in any rush.

Well done to those that have been buying underpriced EDS tokens from hive-engine and congrats to the EDS tokens holders that have held from prelaunch. Your weekly payouts might increase soon.

The current State of EDS

Based on EDS's current mode without miners, the table below shows the minimum projected amounts EDS will produce based on HIVE POWER only. Content, airdrops and other rewards are not included The table below is the bare minimum. Starting on week 1, you see the APY is 13.20% meaning if you hold 1000 EDS tokens, you will receive 132 HIVE over the course of a year. I project 19% earnings on HP as an easy target to hit and use this figure as base. We can see that EDS HIVE income payouts will increase by around 1%. Please remember these projections do not include content rewards are tribe tokens. Here's is a view of how EDS will perform over the next 50 years without miners.

Before I start, people have a really weird thing were they value investments on the price of the tokens and not the ROI they produce. EDS miners (EDSM) will be sold at a price of 10 HIVE each and each one will mine 2 EDS tokens per year to provide a 20% ROI. I could sell them for 1 HIVE each with each mining 0.2 EDS tokens per year and have 10 times more to sell but nah. Please do not tell me the price of EDSM tokens are expensive at 10 HIVE when the ROI is dependent on the amount invested. If you would like to invest 1 HIVE, buy 0.1 EDSM when they are released, it's the same thing really.

EDS miners (EDSM) in a nutshell

Below are 4 tables the same as the one above but showing how the ROI for EDS tokens changes depending on how many miners are created and sold. In the examples below, we look at projected APY's based on creating and selling 1000 Miners, 2500 Miners, 5000 Miners and 10,000 Miners. Again, these projections are based on HIVE POWER balance only 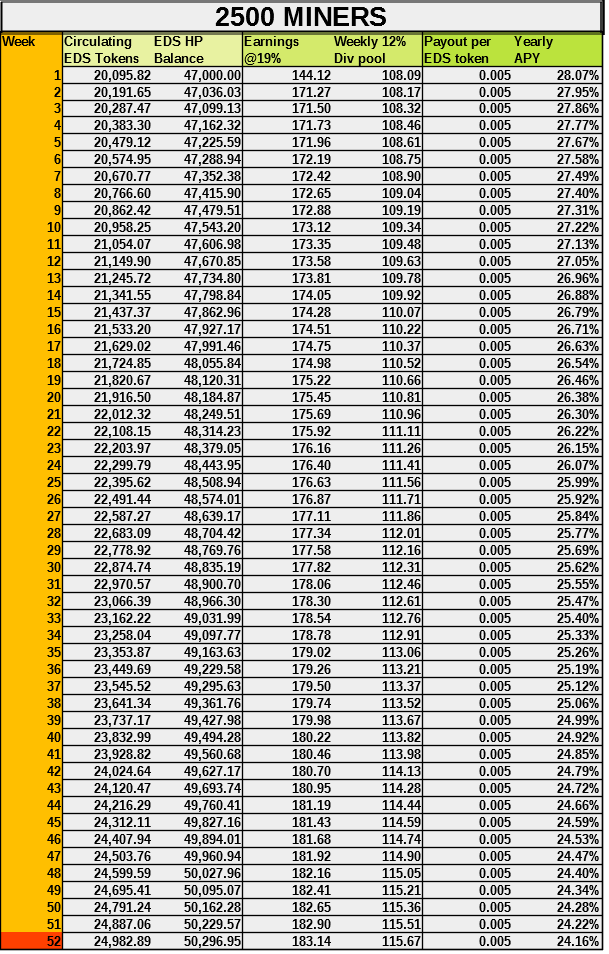 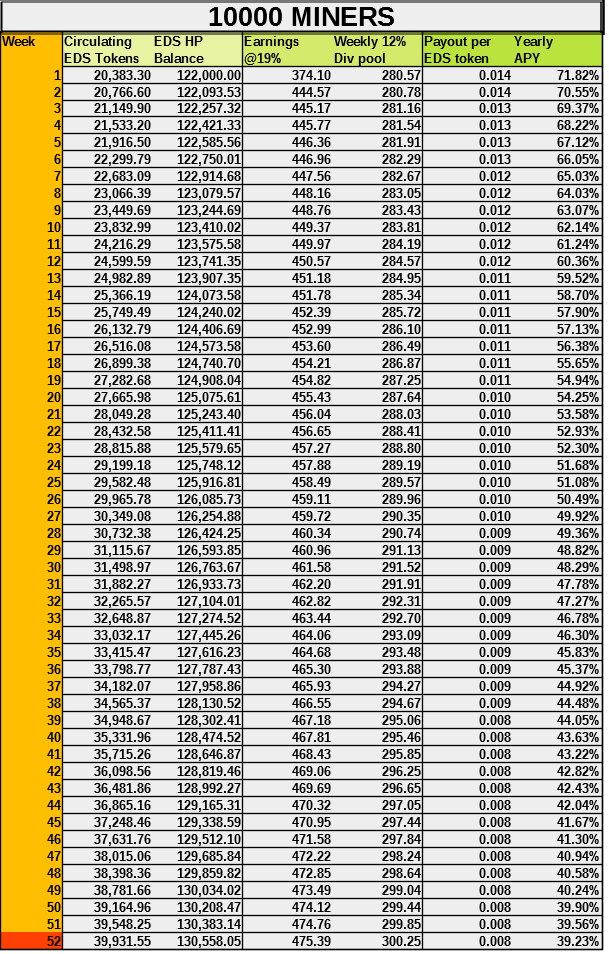 Time to push @eddie-earner to phase 2

I've been saying for a long time, I'll do something with the @eddie-earner account but I've not known what. Capping the token at 20,000 was part plan/part hard to sell more, haha. The idea was always to create something from the @eddie-earner account that was 100% HIVE focused, no tribe tokens, LP's, gaming, etc, just 100% HIVE POWER. I have thought up and run the numbers for many ideas including simple tokens games, lotto's, earning from off HIVE, NFT'S and much more but I guess that's part of EDS's USP to be a HIVE pure investment token, not tainted by second/third layer tokens, all HIVE POWER. I think miners that mint new EDS tokens will be something people will like.

Thank you for reading through this post. If you spot something that looks off with my numbers, please let me know in the comments. If you have enjoyed this post please consider dropping a big dirty 100% upvote and sharing this with your follows with hitting the repost bottom.

"Captain, we MUST save ALL our hives to buy up many of these glorious EDSM!"

"By golly, you may have just stumbled upon one of the famous treasures in the HODL world, a passive earning income token!"

Yeah so I think I need to try save some hive and buy some of these, that's for sure. :)

Thanks for the show of support. All being well, they'll be released without the next few days

Sounds interesting. I am conflicted on what to invest in as there are so many good projects I have yet to enter and are in development. I plan to HODL the single EDS token I got in hopes that it generates me enough in 50 years though.

Yeah, its hard to know what to do.

The oldest person on Earth is 118, so there is a chance.

Eating healthy, exercise, and dont get run over by a bus.

We'll be downloaded into Robots by then. I'll gonna get a body that can fly.

I was thinking along similar lines. 😂

I have something I don't quite understand with minors. We have a chance to win by payout but after a year we necessarily have the 2 EDS or can we have 0 if we are sticky ...🤔🤔

It is not guaranteed that you will have 2 EDS tokens at the end of the year.

I would prefer a miner that mined tokens for me - but I guess that's an income token and not a miner?

are you could be super lucky and have 6. You can equal out the variance by buying lots of them :) 😎

What's the time of release going to be?

An interesting new twist to this project. I am happy with the steady Eddie returns on the EDS I own. It is one of those income tokens that just keeps spitting out money.

The fact it is Hive only also adds to it in my opinion. Lots of project use HE or other off chain assets to grow. It is nice to have one just spitting out HIVE week after week (and at a great rate of return).

Time to grow the project a little and reward the ones that have got in from the beginning. Depending on if the miner setting can be edited are not will depend on how many we can issue. If miners can be set up once and thats it, we need to guess how many miners we can issue as the rewards will be set to that. Eg, we try to issue 10k and only sell 5k, miners would receive a 40% ROI based on the setting which is good for miners but bad for the project as we'll have only collected half the targeted HIVE amount from selling them. If this is the class, we'll aim to issue 2500.

I've asked this question on a few servers, waiting for replies.

Guess who's a bit confused. 😂

But earlier on you talk about draws. Are the payouts twice daily guaranteed or do we get a chance at a payout twice daily?

This was confusing about miners to me as well.

The miners create and mint the token but the person who owns the miner is not necessarily the recipient of the token.

So... miners create tokens, and then the tokens are raffled off to the HODLers of the miners.

It is totally possible to hold miners and never receive a token.

This was confusing about miners to me as well.

Glad it wasn't just me then. 😂 Thanks for the additional explanation.

a chance to win, it's not guaranteed.

Awesome. Above stats are if all miners are sold @ listed price.
Initially when EDSM idea was put out, I thought it may be giving confirm EDS tokens as per 20% APY, but using scot bot and mining make it tricky as with few miners one can get more than 20% or even less all on luck But for long term or ages it would be 20%. Steady 20% to everyone is also a good option to consider?

Hello @eddie-earner I'm not really understanding all the math that goes along with the mining token. I'll keep reading and learning. Thanks for all you try to accomplish to help Hive members.