I Truly Believe It's Possible

Walking home the other day I just remembered a post I did a few months ago and I thought about how quickly life changes. After getting home I looked up the post and was amazed how far I've come since then and also that it's not all my merit, a good part I owe it to picking the winning side.

My post in February this year was about what could I buy with 3 years of work on the blockchain, without any initial capital invested.

Yesterday for some unknown reason I wanted to see how much my accounts worth in USD and was shocked to see the result as it was $9,100. source

This is what I wrote back then and to have some sort of understanding about the value of $9,100, I picked a car I could buy with that kind of money. Obviously I didn't need the car and I did not buy anything with my stake for a good reason.

Now after almost half a year, looking at my wallet and all my assets earned, I'm around $31k now. Let's note that HIVE is at $0.52 now, so it's down, compared to its ATH, but even so that's 3x more than it was six months ago. I went searching for a different car to see what could I buy now with that money (just for fun) and I came up with this Audi A3, which costs around 27.700 EUR.

However, selling everything now to buy a car would be the biggest mistake I could ever make.

Today I'd like to bring two extremely valuable posts into your attention, from which you can learn a lot about what a good strategy is when it comes to managing your capital.

The first post would have been from our beloved SSUK, aka @ silverstackeruk, the mastermind behind SPI, LBI and CL, who once has shared how he got out of dept and started investing in just one year. I spent one hour looking for the post and could not find it, which is a loss as I think everyone should read it and learn from it, it's a really good. Maybe he can help later with sharing the link.

The second post, just as important as the first one (would have been) has come from Empo aka @ empoderat. Actually there are two posts I'd like to recommend to you:

I'm not going to summarize the content of these posts, I'll let everyone understand what they naturally do from them. However, if I were to make a poll to see what's the most important thing people have learned from them, I bet 90% would say Wow, that's a lot of money and what a car! Yes, that is true, it's a lot of money and a beautiful car, but what is more important than that is the lesson you can learn from it.

Unfortunately many people have the habit of cashing out most of their earnings and spending it all on different things. When you have no food on the table it's understandable you need to provide for the family, but this is not always the case. Sometimes buying new things is more important than tightening the belt in order to build up some capital that can guarantee passive income and financial freedom in the future.

The idea is to make money work for you and you can only achieve that by building some capital and invest.

Let's go back to my case. If I would cash out all my holdings to buy the car, I'd be left with what I could earn from daily blogging. No earning from curation, no tribe tokens, no yield farming, no dividends. The car would only eat money as it has to be maintained constantly, not to mention the taxes you have to pay and insurance.

In a year time the car would worth 10% less as it is considered a used car, while my holdings can double, triple or God knows how many x.

There's nothing wrong with taking profits, just as it's normal to power down and take profits on Hive. However, timing is everything. We've seen how many lives can be changed just by being perseverant, showing up every day and using earnings the right way.

SSUK has started a tutorial through @lbi-token about how to build wealth. Here's the first part. I suggest you read it as it may change your view about personal finance and look for the other, upcoming parts as well.

Another good advice is coming from Emperor, who's a legend in the crypto world. He tweeted this three days ago and he got a reply that proves he's right. 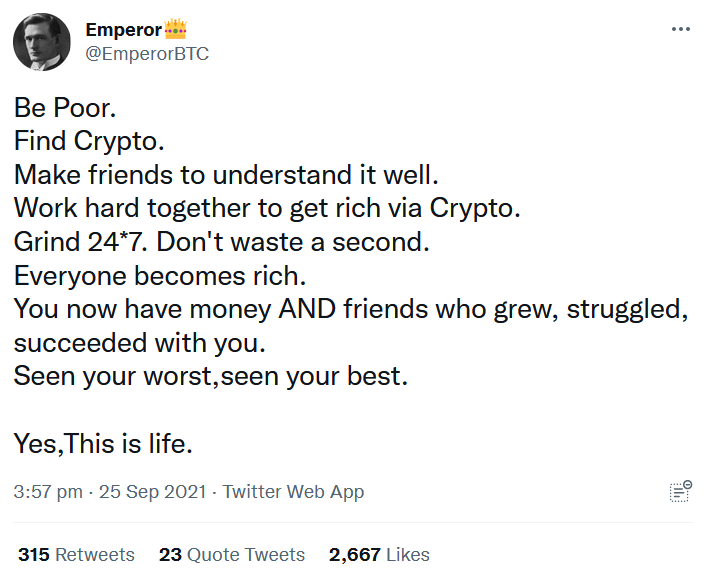 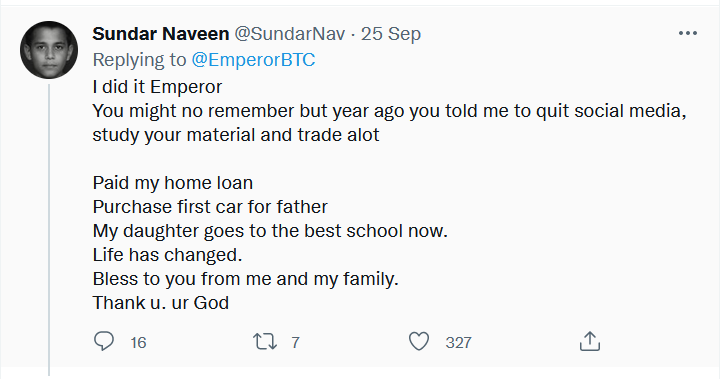 You may or may not believe what the guy is saying in the reply, it's up to you. I know it's possible. I'm working on it and can't believe how far I've come since I've started.

I keep repeating myself, but we have a huge advantage here on this platform. We have a great community, which means help can come from everywhere. Wasting time on social media is like pandemic but it is an option, not a must. Learning is not an option, it is a must if you want to succeed. Those who have already succeeded and went through thick and thin are sharing free content that can help you learn a lot. The opportunity is given.

Thanks, very inspiring!
We can grow together as a community.

I agree, we grow together as a community.

Hey, my name is Ibrahim, I'm a German living in Belarus. I would be glad if you visit my profile, I'm trying to write a blog about my medical study in belarus, if you would like to follow my blog it would be a pleasure for me 🙂

That's not the way you get attention and followers. That must be earned, so I'd advise you to stop spanning (I saw you are on a mission to contact people), till it's not too late. You could be blacklisted for comment spamming.

Thanks for the tip

You deserve the growth as you have worked very hard and stayed consistent. This is what it takes to grow the way you have over the last 6 months.

Thank you! Consistency matters a lot, I have to agree with you.

An inspiring read to start my day!

One of my favorite aspects of being here on Hive is the things I learn and the people I meet! I've learned so much and gotten off on the right foot for the future of my family. I could certainly do more on here and with the different yields and all that but we have to find what balance we find is right. I am enjoying the rewards I'm getting at the same time as being able to interact with some of the highest caliber of people I've met on the internet. I don't think I would trade all of that for a simple car, that's for sure!

You don't have to trade it. However, I do believe this is a community and support must be reciprocal. So cashing out everything and then expecting others' support is .... not right :)

It's too late for me to upvote this post, so please accept this slice of !PIZZA instead.