Recently I have seen many of these messages in the comments of Leofinance and hive, and I was curious to know the value of these tokens, since as we know, derepente can be worth as much as the POB token. When I went to hive engine and saw the amount of tokens that are created on the Hive blockchain it was really surprising, as there are hundreds of tokens available, which I currently only see the tip of the iceberg, you can find tokens that have a value of $62 to some that are worth nothing or were projects that ended in failure.

If you go to this section, you will see what I am talking about. When you open hive engine, you will find the most known Hive tokens (or the ones you have in your wallet) which are SWAP.HIVE, POB, LBI, BEER.

But if you start clicking on each of the options in the token features panel, you will realize that there are some very curious tokens and others that are worth much more than HIVE.

For example when you click on MC, it shows you which tokens have the highest market capitalization and also which have the lowest MC. So far the token with the highest MC on Hive engine is Lira (LIT) created by user @pab.ink with a MC of $5.8 billion and has a price of $58.68.

It is followed by PewDiePie Coin (PEWDS) seriously? a Pewdiepie coin? This was created by @luca-legend (famous president at dcity.io) and according to the description of the coin is the official youtber coin, although I did not find useful information that related it to this coin, this token named after a famous youtuber also has a MC of $5.8 billion and has a price of $5,868.

And in third place with the highest MC is Sedatabase (SBD) is not that of steemit and was created by @sedatyildiz and is a token of a community where they share completely original open source software and programming, and according to their description they want to create a completely separate community from the hive. This token has a MC of $586 million and is priced at $0.00587. 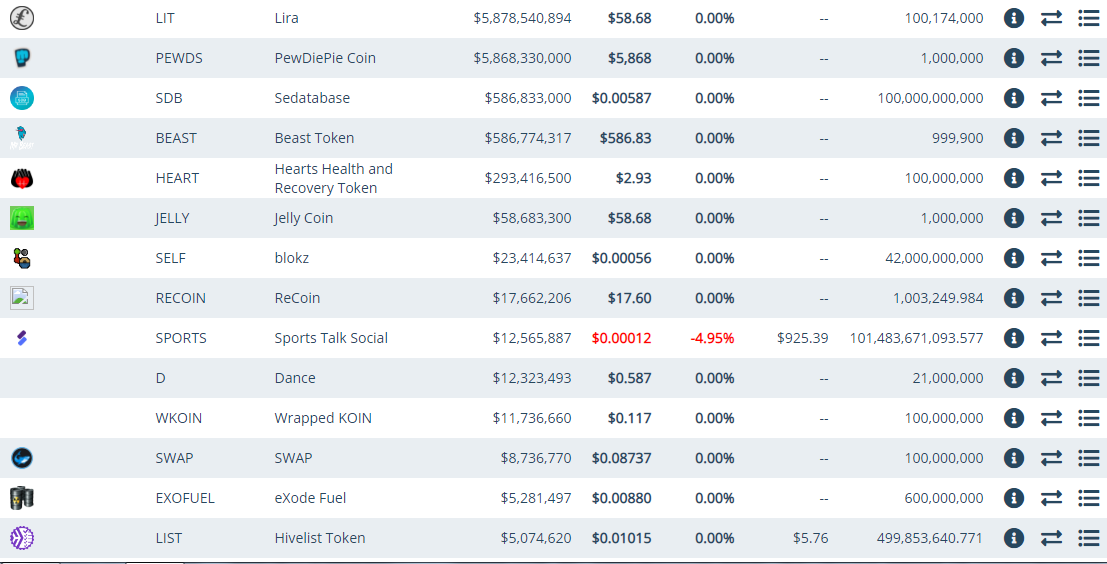 Now we will talk about the most expensive tokens of Hive engine, and first we have BTC Pegged (SWAP.BTC) a coin backed in the Steem blockchain was created by @btc-swap, the information I found about it was not very useful, because I did not know if it was the same, SWAP.BTC has a price higher than a BTC as it currently trades at $63,099.

Then we have ONE COIN (ONE) a somewhat curious coin, as it is the only one that created between @brofund and @TheMarkyMark fantaciaron with the idea that it was the most expensive coin in history, a coin with an interesting proposal that is priced at $14,671.

And the third place as the most expensive token of hive.engine we have Chick Magnet (CM) a token created by @cmtoken and although it does not have any information to identify what it was created for, we know it is a token like the ONE COIN, since it has a supply of 1 and has a cost of $7,042.

Now let's see which tokens have the highest 24 hour trading volume, and here I was surprised as I thought LEO or POB would take first place but they are in 4th and 5th place. The token in first place is the splinterland game token, Dark Energy Crystals (DEC) and it has a trading volume of $5,280 in 24 hours, which makes it the most traded token on the Hive engine.

Then we have STEEM PEGGED (SWAP.STEEM) a token created by @graphene-swap, and is a A pegged version of STEEM backed by the Hive Engine Team, it has a trading volume of $3,064 in 24 hours.

And finally we have the token of the popular Hive game: Dcity.io, dCITY TOKEN (SIM) is a token created by @dcitygame and has a trading volume of $3,055 in 24 hours. After seeing all these tokens that I didn't even know, I had a question in my mind, if I could also create my token with Hive engine and be a millionaire? Since creating a token through the hive blockchain is easy, you just need to have 100 BEE (the hive engine currency), give it a name, a token, a maximum supply, a URL and Decimal Precision and that's it. Of course, you must also give it the proper publicity and a purpose so that it is not like the hundreds of junk tokens that are in hive engine, and also alliances with the Hive whales to have someone with power to use your currency, and you will see that in a short time you will have a token that is worth more than the ONE COIN (ONE).

I want to clarify that this text may have spelling mistakes, as I am not an English speaker and I use a translator to translate my publications from Spanish to English, please be kind.