I am Officially a Dolphin now 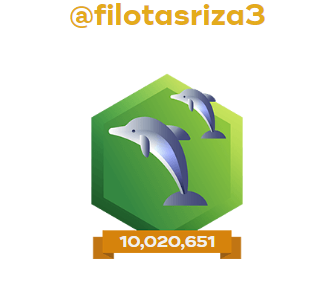 I've finally reached the Dolphin level and it took me "only" 4 years. It's time for a little story, the story of how i achieved that and my ups and downs before i succeed! Grab your popcorn and get ready for an epic journey with me that starts....now

How I Joined Steemit

So the story dates back 4-5 years and to be exact during September 2016 if i remember correctly. I was searching for ways to earn money online without having to invest a certain amount at first.

I couldn't actually find something interesting, i kept hearing the same stuff like completing surveys and microtasks or sell products via eBay. First of all, i had nothing to sell on eBay and secondly, the surveys that i could complete were so scarce for my country that there was no point.

To add to that the microtasks that some sites promoted as an amazing opportunity to make money online, were nothing but peanuts. The amount of money that you could earn from those is close to nothing.

So among these searches, i discovered steemit. A place where i could write whatever i wanted to and get paid for it. On top of that, i wouldn't have to invest a single dollar to get in. To add to that too, the front page (trending page) was full of large payouts so you can imagine my surprise and doubts.

I couldn't believe whether this was the actual real deal or a well-structured scam and i had the tab opened till February of 2017. Yeah, that much! I was searching daily for additional info, read the whitepaper and still had doubts. I just couldn't believe that i could get paid for writing whatever i wanted to.

Long story short i decided to give it a go after a couple of months and it was a decision i haven't regret, not a single time! I regret that i lost some months doubting it!

My Ups and Downs

In my Steemit journey, i had my ups and downs a lot of times. I started out big create revies of anime/series/movies and it was quite successful. i was constantly on @curie's posts as a featured author and i enjoyed some sweet rewards.

I also tried and be as active as i am these days so generally speaking my early days were gooooood. Moreover, more Greek members were in and we started a small greek community. Sadly half of those members and maybe more decided that steemit/hive isn't the place for them.

I lived through a lot of drama, we got NED, fights between the witnesses or community, bid-bots, circle-jerking and a lot more. When i saw things like that i was usually discouraged a lot and i used to log out for Steemit for months.

I couldn't handle how some people only care for money and at the same time a lot of cool authors were earning close to nothing because they didn't know a person with a huge stake or they didn't suck up to them.

When the price of steemit when to the moon i thought i would be "rich". To be more precise i see some of my dreams getting closer and closer. The total worth of my account plus 2-3 litecoins and a tiny fraction of btc was 50.000$ while before that i was somewhere between 1000$-2000$.

I sold the btc and i cashed out around 1000 euros from Steemit just to say that i made some "profits" but i was greedy and thought that my stake will reach 100.000$ That never happened ofc and then the downfall of Steemit began.

When the downfall happened i stopped being active. Not because of the price but because we had tons of abusers and spammers, circle jerking, bid-bots and close to 0 efforts to reward quality users.

I only came back when i heard about the creation of Hive and even though i once again wasn't that active due to limited free time, a couple of months ago i decided to be as active as i can!

I made tons of comments and i stick to at least one post per day trying to earn something having a goal to make my life somewhat better in a couple of years' time.

and here we are reaching dolphinhood and achieving that organically!

Now my next goal is to reach 10k of Hive which will be tough and generate 5k of LEO. I have other goals as well for the different tokens that exist in the Hive ecosystem but only time will tell.

At this point, i want to give some special thanks to people and curation teams. Please note that i just wanna thank you for supporting my content both now and all the previous years!

sorry if i forgot someone along the way

thanks a lot for your support!

Looks like you've had a bumpy ride, maybe bumpier that others. Anyway, congrats on becoming a dolphin, see you at orca :D (careful with tagging though)

thanks for the constant support!

careful with tagging though

yeah, i saw someone didn't like that :P so i don't plan to tag him ever again! i am that kind :P

thanks a lot for your constant support man!

Congratulations! Reading your story in Steemit I found that it looks a lot like mine. True, the Greek community was a beautiful community in Steemit, I had many friends in it and I regret that most gave up, I miss them.

I'm glad you became a dolphin and I want you to achieve the other goals you have chosen.

thanks a lot for your kind words and wishess!!

Welp reading your story I am not even that sad I did not use Steemit between the 2017/18 boom and summer last year. I am often sad beacuse I feel like I could have achieved much more and maybe I could have helped to not let it all go to shit. But I had personal reasons to stay away.

But well here I am waiting for tidal wave again :3

the truth is that some people made some serious amounts of money that period but well that's life!

did you see my votes as @politics-trail thats what I call fishy business ;) sadly I wasn't the beneficiary.

I feel like things did not really get much better, whoever decided to double-down on circle-jerking with this community bs, I don't know. TheyCallMeDan still ranting and rambling the same stuff I heard from the high accounts 3 years ago: Community is so wonderful, so much potential, look at dapps...

haven't seen that one. We also need to take "advantage" of steemit somehow! right now i got only 100 sp so i can't do much, except if we know any other way

I have one personal request:
Please remove my ID from the list of your "special thanks" section.

I think this a simple ID tagging-spaming, which triggers the GINA bot every time.

I think this a simple ID tagging-spaming, which triggers the GINA bot every time.

Ah i didn't know that! just wanted to say thanks to all those people that supported me along the way, that's why you don't see for example every witness :P

Once again thanks for those random Toruk votes and the rest of them, and as per your request, i already removed the name!

Congratulations, man! I like personal stories, and yours was an interesting one! :)
Doplhinhood reached only through organic earnings is awesome!

haha glad you liked my story, also thanks for the support!

yep slowly and steadily i am getting bigger and bigger! except when i am gonna cash out everything :P

Woohooo! Congrats! That's quite an accomplishment especially with that rollercoaster of adventures!
Cheers to another 5k!!

hahah thanks a lot!

After your years, I’m glad to know you through Leo Finance 🙂

thanks a lot man

Congratulations on reach this amazing milestone. It's great to have one more dolphin in the Swarm now! I like to read your story and I believe it's quite an achievement to reach this level in an organic way simply by creating content.

thanks a lot for reading my story! and it's nice that i am part of the swarm

Well done :)) Keep on rocking my friend! You' re da best!

To the next level then!