Cryptocurrency needs to be anonymous 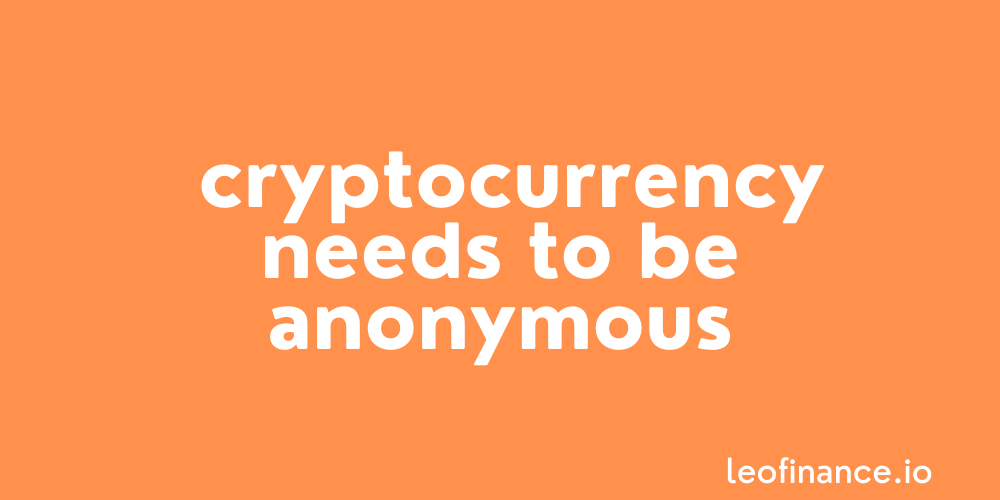 An argument as to why anonymous, untraceable crypto like Monero (XMR) is the only way forward.

I have a confession to make.

One of my (nerdy af) guilty little pleasures is following the trail of crypto coins as they move via sales and transfers.

After watching movements on the exchanges, I head into block explorers and compare addresses with people’s transparent wallet addresses.

From there it’s pretty easy to match up wallet addresses with who owns what, made especially easy by the personalised wallet address system we use here on Hive.

I then use some of the awesome portfolio trackers like Debank to have a good sticky beak at what’s going on.

Is having transactions on a public blockchain a good thing?

So, is being able to follow the trail of where crypto coins move like this a good thing?

Well, it’s certainly a bit of fun for me, not to mention eye opening at some of the figures some of you degens are playing with.

But, the deeper down the crypto rabbit hole I go, the more I see how valuable privacy coins like Monero (XMR) are going to become.

So ultimately, my answer would have to be no.

Anonymous cryptocurrency is as important as ever and with its system of anonymous addresses by default, Monero remains a clear leader in the privacy coin space.

All details including the sender, receiver and amounts on transactions using Monero, remain untraceable.

The biggest argument for why I don’t believe having transactions displayed for all to see on a public blockchain is a good thing, is this affects the currency’s fungibility.

Anonymity increases fungibility because two units of currency can truly be substituted in place of one another.

When you can follow the trail of a coin, it’s easy to picture a scenario where certain paths and coins themselves become tainted, limiting who wants anything to do with them.

Consider a transaction that features coins of whatever public cryptocurrency you want to choose, that features previously stolen coins.

Or even simply coins that have been ‘tainted’ in the eyes of whoever, because they have simply passed through the wallets of a convicted criminal.

You can see how quickly this could become a problem and why only a privacy coin like Monero offers true fungibility.

It doesn’t matter what the history of the XMR you receive is, because the transactional anonymity means that they’re all truly identical.

Untraceable crypto like Monero is the future of cryptocurrency

So while I’d love to keep snooping about, you can see that the anonymity of cryptocurrency is so much bigger than just someone’s personal privacy.

The very traits that turn magic internet money into a true currency are at stake here.

If whatever you choose to use as a currency is not fungible, then is it even a currency?

Obviously the answer is no.

Cryptocurrency needs to be anonymous.

Why not leave a comment and share your thoughts on why cryptocurrency needs to be anonymous within the comments section below? All comments that add something to the discussion will be upvoted.

This Monero (XRP) blog is exclusive to leofinance.io.

While I agree with you in theory, in practice the vast majority of people couldn't care less. As crypto becomes more and more mainstream, the amount of people who don't care will increase exponentially as well. Unless and until there is a "risk" to having some of these pass through your wallet, I don't think it will ever become too big of a deal. That said, it probably isn't the dumbest idea to own a little chunk of a privacy coin, just in case. If it does end up becoming an issue down the road, they would probably be in for a pretty substantial run.

This argument I'm making is more aimed at corporations and big players, rather than your every day consumer or small-fry investors like us.

As we're starting to see governments and major companies start to incorporate cryptocurrency into their balance sheets and day to day dealings, public ledgers like we have on Bitcoin will be hugely problematic going forward.

It opens the transaction details of corporations or entire governments to the entire public.

The risks of allowing this to happen are just too high.

If you have any sort of public reputation or profile, you simply can't make a deal using Bitcoin as your unit of exchange.

And if you have to even worry about that in the back of your mind, then that currency is not fungible.

Maybe if you're a private company. Public companies have to disclose all this stuff anyway. Plus, most of the time the money is the absolutely last thing that trades hands, so the information is usually public at that point anyway.

I don't disagree with the government aspect but if and when it becomes that sophisticated, I think there will be plenty of ways for them to obfuscate who the buyer and seller are.

That's just my opinion. If they make everything "private", the government completely loses control of the ability to tax. My bet would be that they figure out ways to maintain their privacy while still trying to out the general public. Might be a little cynical but...it's not like we don't have reason to think that way.

And a second layer token such as LEO could also be private?

Sure, but I'm more arguing that having a completely open, transparent blockchain, affects the fungibility of that token.

Whatever token it is, it doesn't matter.

If people can track your every move, then you're going to think twice about spending.

And if you're thinking twice about spending your token, then its fungibility is brought into question.

Transacting in privacy coins completely solves all of the problems around fungilbility.

In the same way, banks just recycle bad cash I guess it's one way of reasoning. I do agree there is probably a need for some form of anonymous crypto but I feel like it won't affect most people. The general user probably has nothing to hide nor do they care.

We're just pawns in the economic grand scheme of things.

We both know that big money makes the world go around and that it's going to be a major problem for governments, banks and multinational corporations to transact using cryptocurrency on a public blockchain like Bitcoin.

That's one thing that I never liked about this blockchain, the fact that all transactions are visible and that you basically don't have any privacy when it comes to your wallet, but if you look at monero on coinmarketcap you will notice that although it's a privacy token and it has a lot of value it doesn't have big value against USD.

Do you think this is because people are using Monero to just 'wash' their Bitcoin, before immediately transferring it back to a 'clean' BTC address?

Rather than holding their entire balance in Monero for any length of time?

I have no clue

Voluntary disclosure of private information is very dangerous. That includes transactions trail. I'm glad I didn't have the bad idea to use my full name as a Hive username, but still regret from time to time that I used a photo of myself. It's too late, but I'm still thinking of changing it to something more "artistic".

I've somewhat given up keeping my identity here private.

I have no interest in hiding money from the tax man (who already knows who I am as I've used KYC accounts to move money in and out of the system).

I'm not big enough for my wallet to be a personal security risk, like say it could be for a major corporation that's transacting in Bitcoin.

Either way, we could both use Monero to wash our history starting from now if we so choose...

Hi Dane
Truly a titulating post for those of who love block chain explorers and learning about their capabilities.
Question: What role do you think projects like Monero will play in the expanding role of blockchain as government entities allowing peoples confidential information to be stored on the blockchain. Does Monero have have any projects bulti on it, or does it chiefly serve as a privacy coin, or anonymous medium of value exchange?

Not sure I've had my work described as titillating before! :D

No, Monero doesn't have the capability to build for example private database dApps or the like.

Its aim is purely as an anonymous medium of exchange.

But can you imagine the fallout if a government actively promoted the use of a network like Monero?

I see your point. I was momentarily blinded by my mind only looking for logical or rational solutions, but ignored the inherent irrationality of many aspects of our world, and the real goal, control.
I have adjusted my thinking accordingly.
:)

Nice one! One thing I would add is that privacy will probably be more valuable than crypto in the future. People should start valuing it accordingly.

This ties into the comment I just left gadrian above.

What are your thoughts or advice for people like us that maybe didn't start out in crypto as fully private, but may want the option to go down that route in the future?

We all started out that way. I had to create a personal profile on freelance websites if I wanted to get my ass out of poverty. During that time I wrote content for a guy that created an OSINT tool for intelligence agencies. In layman's terms, he combined AI with some search algorithms and the software scrapped both the surface web and the deep web. It identified people and their close circle of friends/fellow terrorists/criminals based on any piece of information, be it a phone number, email, or just one of their online usernames. Sometimes you get the results back in less than 10 seconds.

Hiding from governments and the taxman isn't my aim because you can't really do that. I'm just trying to avoid the inconvenience of stepping on someone's toes by promoting crypto and educating people on how to benefit from it. There are a lot of people with a lot of money out there and none of us can know what is going on in their heads.

For me it boils down to simple logical questions:

Bottom line is that you can only do so much. Transparency is an integral part of blockchain so you can't really know what consequences a transaction you made today will have in 10 years.

Take advantage of what is free. Having 10 email addresses instead of one comes with no extra cost. The same goes for your crypto wallets.

Be prepared and if we all go broke there will be nothing to worry about. But if we make it, you will thank yourself for being a forward thinker.

Thanks for attending my Ted talk. I just realized that I turned a comment into an article. Sorry about that.