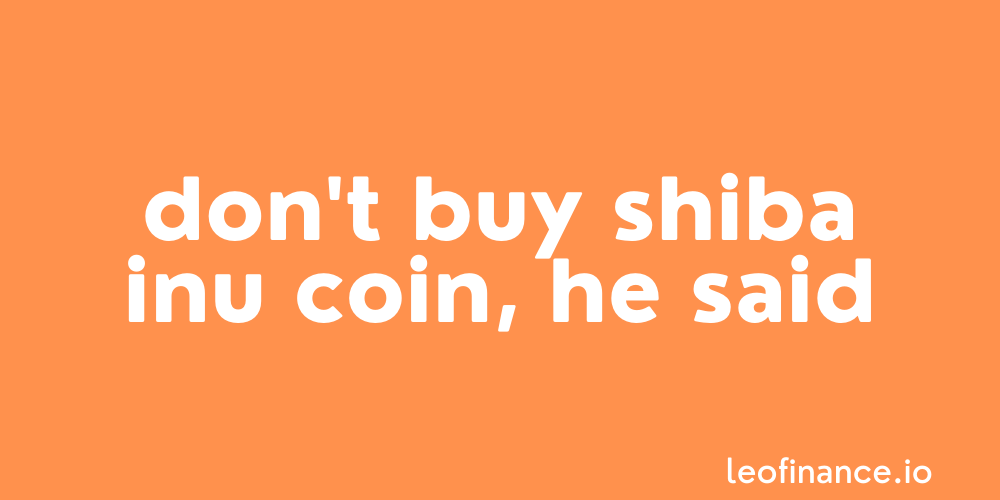 The Shiba Inu coin price is pumping and I’m happy to let the normies have their fun.

How about that Shiba Inu coin price, huh?

After just last week laughing at the prospect of SHIB hitting $1, my favourite (erm...) dog-themed meme coin has just pumped 300% this week alone.

Why is Shiba Inu coin going up?

Shiba Inu coin is a scam that will sooner rather than later, leave normies in the proverbial.

What caused the SHIB price to go up this time, you ask?

Well this particular 300% rally was fueled by Elon Musk’s latest tweet about his own Shiba Inu pup named Floki.

That tweet is all it took to cause a 300% rally in my favourite scammy meme coin (ah, that’s more like it).

That means that the SHIB token now has a market cap of well over $10 billion and its gains do the mainstream media merry-go-round once more.

On the back of a celebrity tweeting a photo of his dog.

A rally of this magnititude is bound to cause some serious damage to the technicals and that’s exactly what we see.

Just take a look at the following chart. 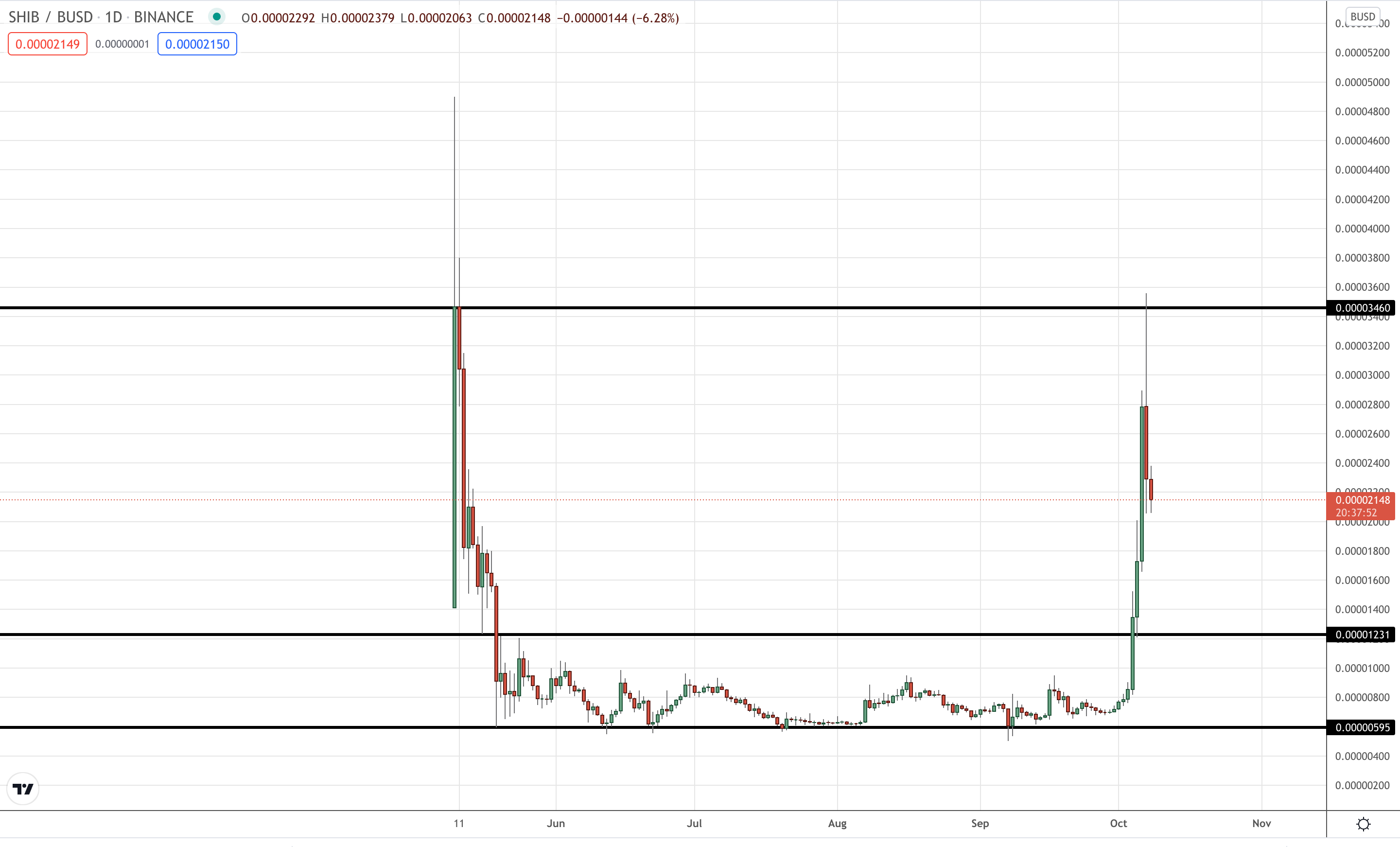 The lower range I was talking about just a couple of weeks ago has been destroyed and perhaps most significantly, price retested its previous highest close.

Now, how about this for a stat.

How long did it take Dogecoin, you ask?

Should I buy Shiba Inu coin?

Why the heck are you asking me of all people whether you should buy Shiba Inu coin?

Obviously I’m out of touch with the youth and have no idea what the heck I’m talking about when it comes to meme coins.

In normal times, buying a meme coin that’s just tripled in price on the back of a famous person’s unrelated puppy tweet would be stupid.

But we live in a clown world of magical internet money that only goes up.

Make of that what you will.

tHiS iS nOt fInAnCiAl aDvIcE!11!

Why not leave a comment and share your thoughts on not buying Shiba Inu coin, within the comments section below? All comments that add something to the discussion will be upvoted.

This Shiba Inu coin blog is exclusive to leofinance.io.

Clearly a bottomless pit, people buy it because of the hype, because of Elon's tweets, but what is the real use of this cryptocurrency? None, it was created by the hype and the Fomo and will be defeated by the same.

What can you do with it?
Send, receive, sell, and pay TX fee's.

Except their token distributions are not decentralised (especially not SHIB and DOGE), while the SHIB defi platform is a rug pull waiting to happen.

Cryptocurrency is not just about having the ability to transact.

It also needs to hold value, while remaining censorship resistant and secure.

SHIB is not Bitcoin, lol.

--and that's all we do with USD, AUD, EUR, CNY, and all other fiat currencies. Despite the fact those are fiat currencies, doing just those things has made them pretty useful. (Maybe not the TX fees or taxes part of it, but nothing is perfect.)

Im just saying hive is my favorite.. but I woulda bought hella bitcoins if I wasnt stupid and being focused on fixing the physical world, with physical tools.

It could be similar with Ethereum, just not as bad.

With Hive, it's still the beginning.

and its better tech!!!

Be careful what you wish for

The key difference would be that HIVE's token distribution means that he couldn't just self appoint himself as Queen of the Hive like he has done with this Dogefather shit.

Unless he bought a shitload of stake, he would have no real say in direction.

In saying that, we could certainly do with a hype injection here on Hive though!

I wonder if Elon was sitting on a bag full of Shiba Inu when he made that tweet.

Don't worry, I'm sure we can trust the SEC in this matter.

$10 billion market cap... If all that money would pour out of worthless SHIB into HIVE. I agree with you, we live in a world of magic internet money that only goes up... I was thinking at some point to buy some SHIB, but never did that actually. I guess I'm not that good of an investor.

I guess I'm not that good of an investor.

Amazing so the tweet wasn’t even about the coin ?

That's the beauty of it I guess haha.

I can hear your disdain for the token, or maybe I am projecting it on you. I also hold no dog or meme tokens and feel slightly annoyed by it.

However, I don't want to emulate the maxis. lol

Have you loaded up your bag?

I am also not a proponent of Shiba Inu ... but sometimes crazy things happen in the financial markets.

This SHIB move being Exhibit A.

... but sometimes crazy things happen in the financial markets.

So true, and not just crypto markets. Any market where there's money to be made.

In 2019, Carvana was trying to find customers who wanted to buy cars without leaving the comfort of their couches or sofas. Carvana was doing so-so, until the Ides of March 2020.

That's when governments worldwide turned COVID-19 into an excuse to crash their own economies by "persuading" people to stay home for "2 weeks."

Since then, you know the rest. Because of this, Carvana took of in popularity and revenues.

Everyone once in a while can throw expensive bones to Floki
I guess this is what happening these days.
Building stuff looks so old.
It still works though

Puppy-themed meme coins have their place in getting the attention of normies, while the serious members of the community continue to build real projects alongside them.

Stick with Dogecoin, it's tried-and-true. Accept no substitutes!

If anyone is considering Shiba Inu, it might make more sense to go for HoboNickels (HBN); if the crypto doesn't get it done, cash out and buy modified Buffalo Nickels to get Hobo Nickels as collectors' items.

Oh man, how have I never heard of a Hobo Nickel before??!

I'm going down the rabbit hole to see if there are any artists working on old Australian coins.

Hobo Nickels were a big deal during the Great Depression years, which is when the United States was using the Buffalo and Indian designs on its 5-cent coins. I've seen pictures of Hobo Nickels featuring those coins, but I have yet to see anything for coins featuring any iteration of the Thomas Jefferson nickels.

If you search for Australian coins modified artistically the way Hobo Nickels are, I'm guessing the best time period for that would be 1930 through 1945. Australia's history is different from US history, so you may get lucky in other time periods. Good luck on your quest.

Hi @forexbrokr
Love the catchy title, and your distain for dog meme coins is wonderfully clothed in satire and humor.
A well written post, and my compliments to the Chef.

LEOs are for cats. Big cats.