Settlement check from Robinhood. Is this real? 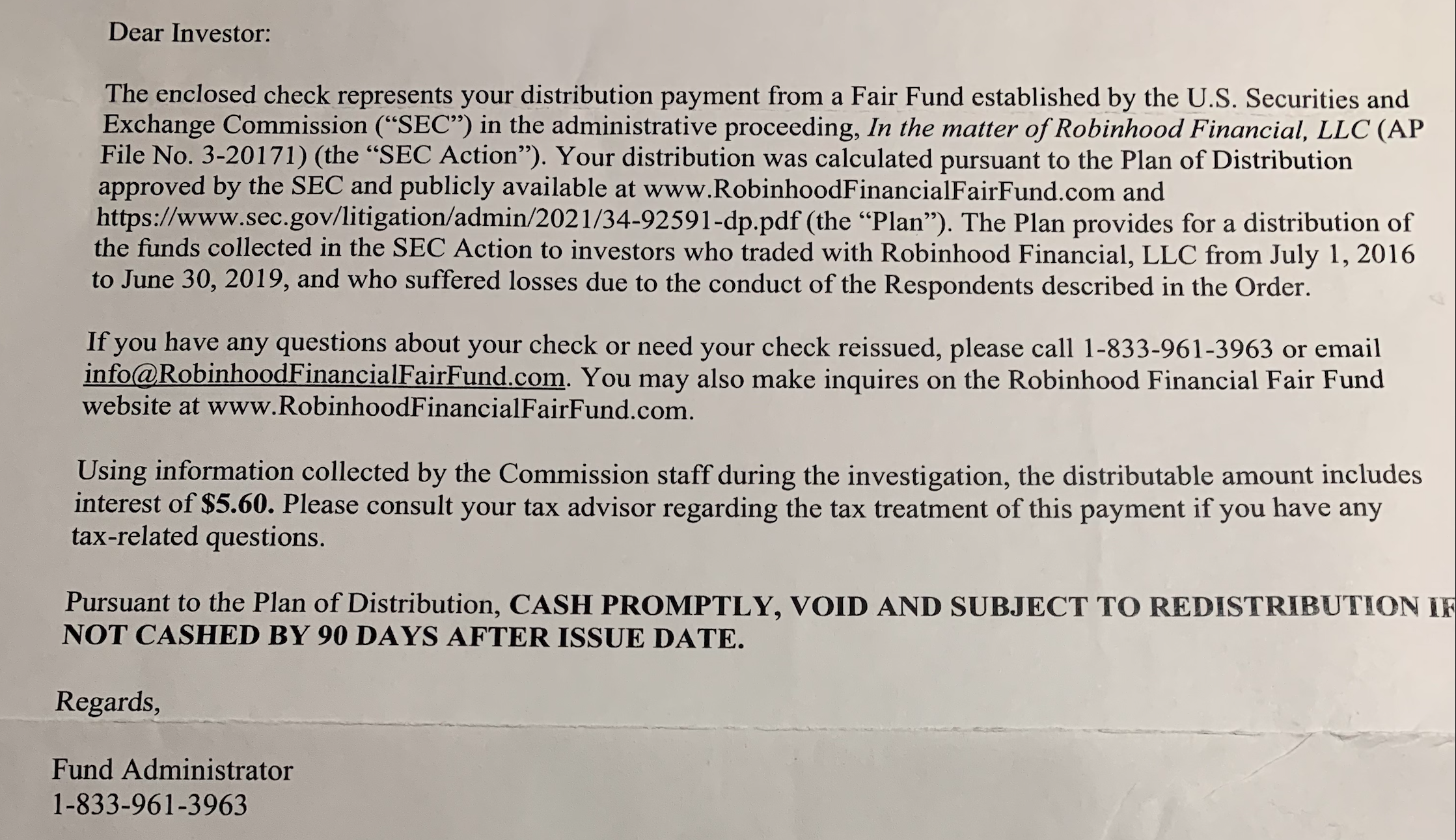 I just received a letter informing me about a distribution payment from Robinhood Fair Fund with a check for $97.78. I didn't have a time to fully research if this is real or a scam yet. If you have received something like this feel free to share in the comments.

In the past I did receive some letter that there was an ongoing litigation or settlement plans after what happened with GameStop fiasco. GameStop trading stops and issues didn't affect me much, since I missed that train. But I was involved in other stock trades and dodgecoin. I am surprised that I am even included in this mailing list.

I do believe Robinhood messed up with all that trading stops of GameStop and other stocks that were promoted by WallStreetBets. I have no doubt there were some back door dealings to bail big banks who shorted those stocks out. Even though Robinhood did try to explain why they did what they did, I can't fully trust them in this matter. Simply, everything is too suspicious. Either they colluded with those who shorted, or they just chose an easy path not to mess with the corrupt system.

Anyway, now I have this check, which isn't that much to really care about, but nonetheless can't just throw it to the garbage either. Should I try to deposit it or just ignore?

I have seen too many scam letter to believe this is actually worth something. If you are a Robinhood user and have received something like this, please let me know in the comments. 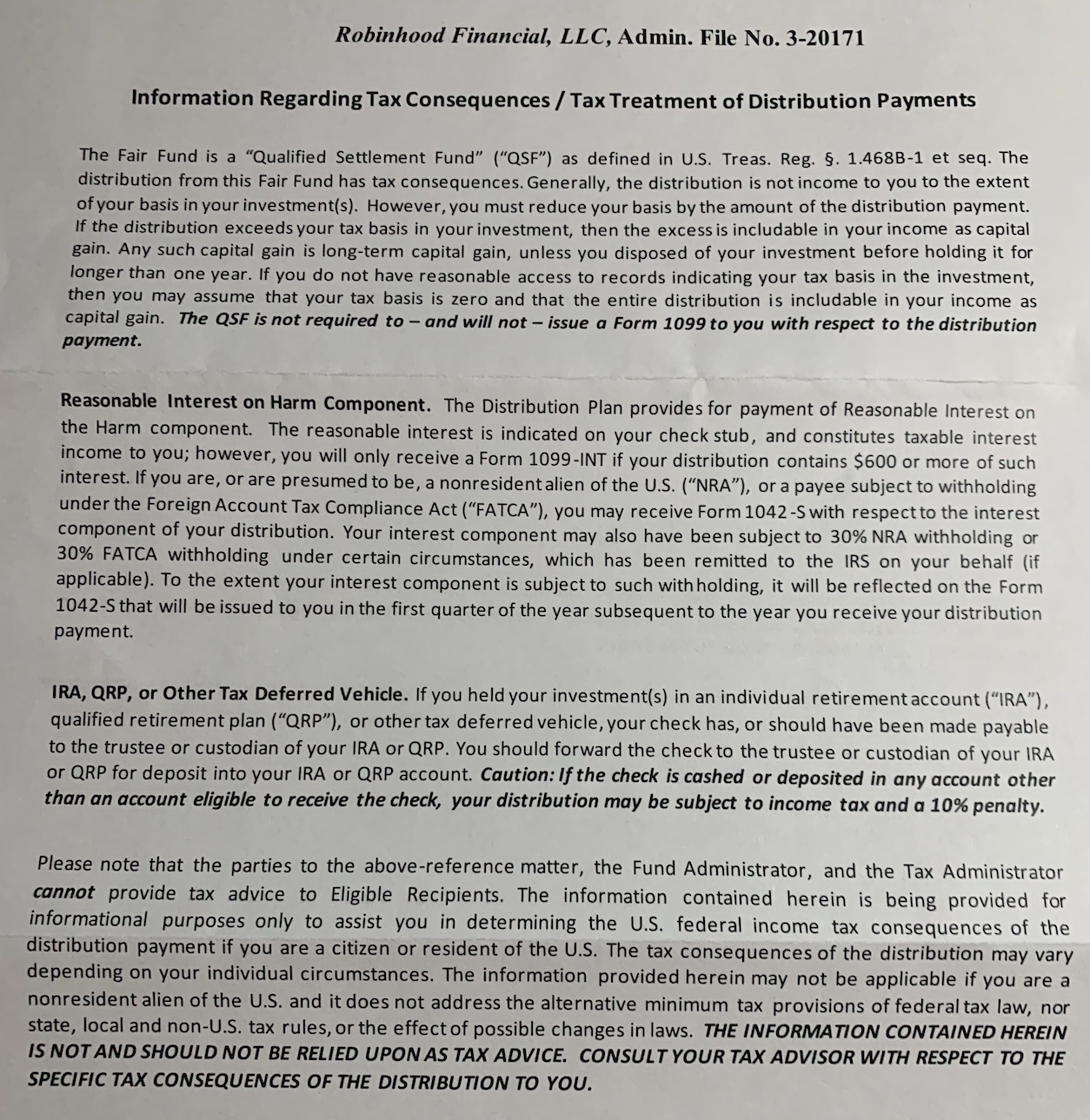 What do you think I should do? Cash the check or no?

It seems to be legit:

In the article above they mention a document where customer account numbers and the amounts offered them are listed... maybe you could try and reconcile your account number on that doco to check?

I imagine so many users moved from Robinhood to Public.com over that fiasco so I'm sure Robinhood might even be happy to use this restitution to try and get people back on their app.

Thank you finding that. That helps. First time I hear about public.com. Interesting, thank you.

Yeah why not, just cash the check to see if it real or not :)

lol yes probably. Still thinking. Check will be void in 90 days. So there is time.

I think you should go and cash the check right away. may be unrequited.

I will think about it. I think check should be good for 90 days. Thank You.

they pay something back, not sure the full story, but it has something to do with transactions from the past that were "unfair" against the customer.

I think you are right.

All I'm saying is, there is no free lunch and no free money in the mail. Do your due diligence before you grab a measly $100.00 from the table in front of you, overlooking the 10 grand on the table behind you.

I have seen something about class action lawsuit in the past, but didn't much attention since usually they end up resulting in not so significant payouts for individuals. I actually thought this was a result of that. I may need to research it more. Thank You.

I've heard others talking about receiving a check as well, but I haven't seen the checks. Read all the small print before cashing!

Yes, reading that small print is the boring part but important. Thanks.

I might call them, just to make sure...and maybe ask for more while I'm at it

Don't you love the part about how they are going to tax it lol. Freakin a man I swear it's bad enough you pay taxes already to the SEC but when you get a few pennies from all of their work you have to pay taxes on it again. Freakin bonkers!

lol yea. I didn't even think about taxes yet. They do like to get their taxes. Thank You.

It looks legit to me. If you traded during the time listed, then you probably were affected, and should be compensated, and they do have a settlement they are paying out on for that duration from the SEC findings. So, I'd give it a go! Can't hurt. Cash it out and buy some DOGE on the robinhood platform since they'll be going wallet soon! LOL

I don’t know why, but I did buy some dogecoin. lol

It's OK. We still love you. And I'll probably still buy some again. Someday. But only if you write a post about it saying I should. LOLOL!