TRODL - TRO token AirDrop to Uptrennd 1UP token HOLDers & How to Claim the AirDrop? What I have heard about Trodl is that it's a NewGen crypto information platform that connects people of the same interest with the future of finance. I also did a post - Do we have a Competition HERE - TRODL the NextGen Crypto Information Platform explaining a bit about the Trodl project launch and their roadmap.

If you have been HOLDing Uptrennd platform 1UP tokens as of May 1st 2021; as this is the snapshot date where you needed to have 1UP tokens in your wallet to be eligible for the TRO tokens AirDrop.

I had closed to 100K; 1UP tokens and this got me close to 1K TRO tokens for FREE. Which as of writing this post is worth $10+. CUrrently; TRO token is being traded for a cent.

The Trodl team announced on their Twitter handle regarding the completion of the TRO tokens Arrdrop for all the 1UP token HOLDers.

We have successfully completed TRO airdrop to 1UP holders, if as of the time of partnership announcement ( 1st of May ) you were holding 1UP tokens you should have received TRO airdrop by now.

I normally use metamask to connect to my ETH wallet. Hence the process to claim your ERC20 TRO tokens was simple. What you need to do is Add a Custom TRO token address and you should have your TRO tokens in your wallet. 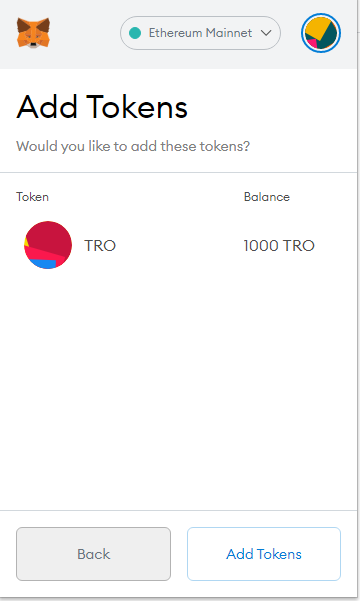 Another interesting part of the story is that - 1UP token is currently trading Up 87+%. I didn't sell any of my 1UP tokens when the news broke out that they will be offsetting the UPtrennd platform. But at the same time, they said the 1UP tokens will continue to be there and traded. Many folks would have exited and panic sold all their 1UP tokens and see now the price is almost touching 100% UP. Long story short don't fall prey to a trap and never panic sell. Take your time to decide what you want to do; giving some thoughts and doing some research before panic selling. NOw, I'm sure folks who would have panic sold their 1UP coins would be regretting seeing the price of 1UP token rising.

Did you HOLD 1UP tokens? And did you claim your TRO tokens AirDrop?

PS:- None of the above is a FINANCIAL Advice. Please DYOR; Do your own research. Disclaimer; I had bought some Trodl - TRO coins.

This is cool.
Enjoy the free crypto u got from air drop. I hope your share will grow a lot in coming days.
Take care and have a good day.
!luv 1