It's the start of the new month and I want to move some LEO over to some of the CUB-related platforms to make it up for my own goals. I am a bit late. With Khal giving out LEO for engagement, I plan on investing a little bit more on the Defi platforms this month. Of course, I still like Defi but I am treating it more as an experiment as the yields haven't really been that appealing to me. In the end, I had to choose and I ended up choosing what people were neglecting this month.

No new changes to the roadmap documentation page and there hasn't been anything new announced for Cub. However, Khal has stated that the future of CUB will have all the features of PolyCUB. The only issue is that we don't know when it will happen and the 2nd IDO is still on hold.

PolyCUB recently came out with the pHive/PolyCUB pool and the first xPolyCUB vote about the yield mechanics are over is also complete. The governance vote ended with the claiming penalty reduced down to 30 days so it's more manageable for everyone involved and it is also the choice I picked. Nothing new changed in the PolyCUB roadmap, but I did see the following about anticipated dates for the new features there. None of it has really come to come out and I am stuck wondering when bonding or collateralization is coming out. The deadlines I mentioned last month are pretty much the same on the site but it's past the date already. It does look like they are more interested in putting out new pools right now though.

Where did I invest? As usual, I checked the BSC and Polygon farms and none of them appealed to me that much. The APR of each pool is down compared to before and I am not really that interested in throwing liquidity into the new PolyCUB paired pools. Maybe it's because the returns have been slowing down over time and the price of farm tokens has not really held up. If anything, I tend to prefer to have a single asset staked so I know it's just that asset and nothing else when I compare the value and the IL would not be that huge.

I think there is a glitch in the xPolyCUB screen but that is what it currently shows. I don't really think the APR is that high. Either way, the ratio is going up slow but that is to be expected with the halving that PolyCUB gets each month. As for CUB, the APY hasn't changed too much and the TVL keeps dropping along with the price. I have faith that Khal hasn't abandoned CUB so I invested my monthl add over there.

I sent 251 LEO tokens over to my metamask wallet using the the wLEO bridge. From this swap over, I got 250 bLEO tokens. I swapped my bLEO into 464 CUB. I have been staking my the remainder of my airdrop so my xPolyCUB is up slightly. So I don't really expect this to change much in the future. I harvested my CUB and I added over 600CUB into my kingdom you can see my current CUB kingdom below. This means that my own CUB stack has gone up 50% and I am looking forward to the other Defi systems when they do come out.

With some help from the community, I was able to track my liquidity pools in CubFinance again and there were quite a few options. For this post, I plan on using howmuchismylp because it's similar to my past reports but I plan on changing this going forward based on a post I am still writing up. If you plan on using this site, make sure to put down the MasterChef address of 0x10ED43C718714eb63d5aA57B78B54704E256024E. As expected, my holdings have taken a huge beating in fiat value. This was to be expected with the downturn in the markets. Both the bLEO and CUB farms have lost about half of their value compared to two months ago. DEC is back down to the peg so I think I will be cutting it from BSC next month. I originally put it in to get more DEC and airdrop points so it has fulfilled my own goal.

Please make sure to invest only what you can afford to lose and nothing I said is financial advice. Feel free to leave a comment if you read my post. If you have any questions, feel free to ask and I will do my best to answer.

While everyone has been focused on Polycub (not a bad thing).

I've been stacking Leo and Cub! I want to be in before the new changes hit. I have polycub too, but it's not my focus right now. (moving against the crowd)

I think your move into Cub is smart!

It's never bad to make moves that are appealing to you than everyone else.

For some unknown reason I find CUB more appealing.

That's certainly how it should be,everyone having their pick.

It's up to everyone's decision. I just think CUB is a steal between 4 and 5 cents.

Opportunities lies for those willing to utilise them, that's a good entry as of this time.

I think it's because it has more room to go up. Everyone is talking about PolyCUB so the chance of a 100x isn't as likely.

Oh, first time seeing this angle.
PolyCUB isn't do attractive to you.

Well, if you think about it then CUB is the main platform and everything feeds back into it. So I think it's more likely for CUB to go 100x than it is for PolyCUB but I could be wrong.

Cud is the mother of PolyCUB, so it would come back, you could be wrong but you not alone on this.

Yea. I like the unappealing moves because there are still a lot of things to look forward to. The features will be tested on PolyCUB so it shouldn't take too long to port them over to CUB.

Yeah, we are expecting the vaults to be replicated in Cubdefi, no loss at all.
More like first come first serve, and it's served hot.

Yea I still think CUB is under the radar and PolyCUB seems to be the focus for everyone else. With the appeal of future airdrops from other blockchains such as AVA, RUNE, and others, I think CUB is the better option to get this time around.

I've taken a beating on CUB too but the value will return.

Yea. CUB has taken a large beating and there isn't much going on right now. I am kind of hoping that the IDOs do come out because it would drag on some appeal to people collecting CUB.

Why will it return? I mean why so sure?

There's a lot in store as far as features coming to CUB. You should join the weekly AMA's on the LeoFinance Discord for sneak peaks!

This is an amazing one, you've actually made a good flow here.
I still can't stake my Cub, don't seem to know why.

You should be able to if you connect your Metamask wallet. After that, go to kingdoms, approve the contract then stake the CUB into the kingdom.

Yeah, done all this even had help.
I just left the little piece hanging there, preparing for PolyCUB entry anyways.
Thanks for the assistance, means a lot.

The project is totally centralized?

In a way, it's still centralized but it's a smart contract so the code is viewable. I trust the team will not rug pull us.

Trust? Kinda defeats purpose. But I respect what ur saying

Your CUB stake is looking, I have just over 800 in Kingdoms, haven't had a look at in a while. Will be good to check how much I have earned on interest.

Well, the interest was like 60% last month and it's still around there this month. So I would expect you to get compounded at like 4-5% more CUB each month.

No way that can last unfortunately

In the kingdom, you invest CUB and get CUB back so I think it will last unless more people put in more CUB.

I just don’t see it. It sounds like hope and putting faith in people on a team which can change. Centralized promised high APR in crypto space has not ended well

However, Khal has stated that the future of CUB will have all the features of PolyCUB.

Lets see how it impacts Cub for its prices.

Well, there are a lot of things that could happen but that will require waiting for Khal. We should probably be prepared to wait because development is slow.

the price looks very good for CUB! Im still stacking my LEO so cant make moves there yet.

I am stacking LEO also but I wanted to build some bags over there just in case. It all feeds into the same system so I believe it will work out no matter where I pick.

I agree. CUB could make the biggest jump depending on how things develop.

100X ? I don’t see this at all. I dunno maybe I’m just missing this but the 100X calls seem scammy to me. What is the long term purpose of this cub platform? Just making high APR?
If anyone has a basic breakdown video link send my way 👍
I just don’t see it. This reply seems moronic to me and since I’ve decided to stay away.

Him competing this to bitcoins growth is ridiculous to me. 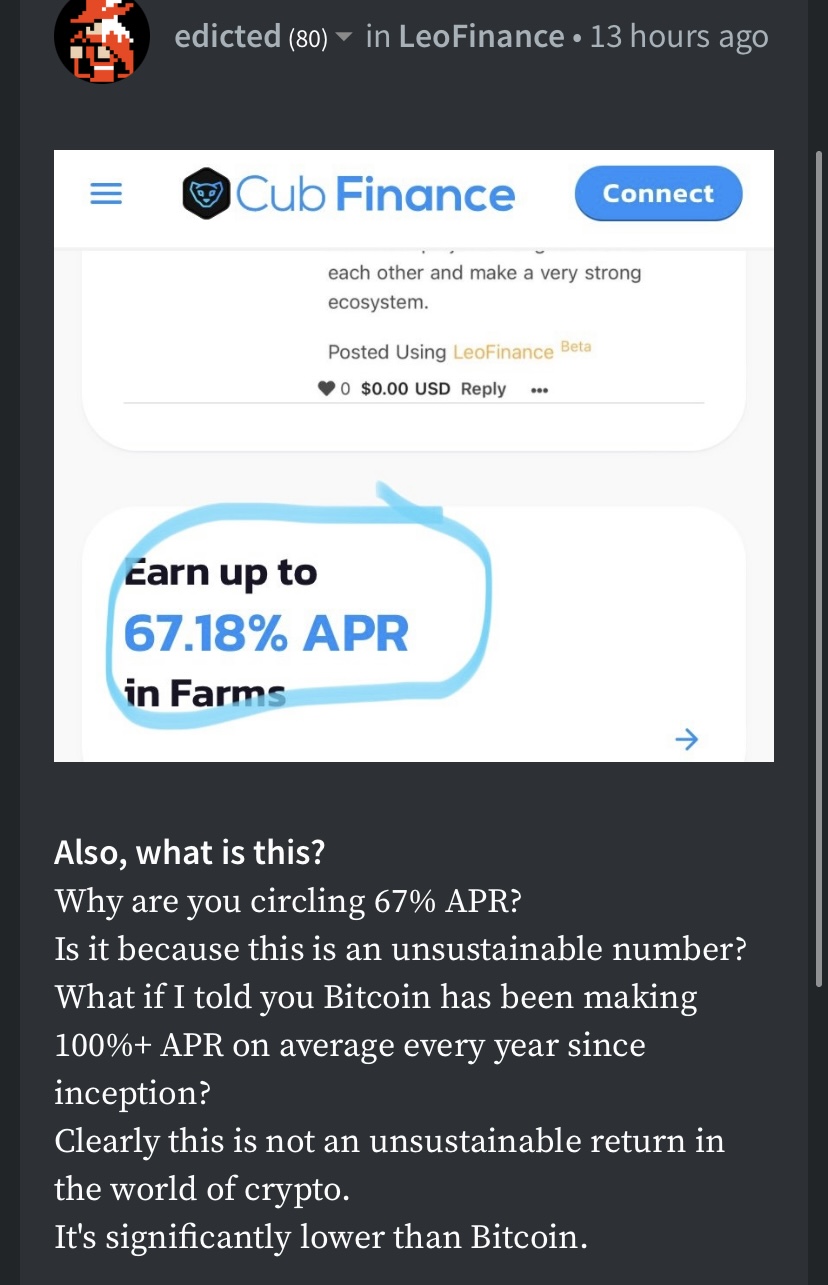 I think it depends on the value the system offers. At least CUB tries to be somewhat sustainable and the APRs have dropped over time. From what I see, it's attempting to make changes that are different from the current system and I think it all feeds back into it.