leofinance in LeoFinance • 9 months ago

September is one of the highest growth months for the LeoFinance project. We've seen steady growth since the launch of our project - showing upward trendlines over the long-term on a myriad of different metrics - but this month we've seen an explosive growth that was unexpected.

This growth came out of a lot of different developments in our community. If you're reading this, you already probably know about them. Our token getting listed on Uniswap, the release of the new LeoFinance UI, our new landing page to explain the whole project, the teaser announcement of LeoInfra, etc. etc. The list goes on for miles.

This week, we have a lot of updates planned including an updated roadmap for 2020 with our project milestones, new projects we've taken on and other major developments.

For now, let us bask in the glory of user growth metrics and ad revenue. The overall traffic to the LeoFinance interface has increased to a tremendous degree. We've seen a 3x growth on nearly all fronts. With our Alexa ranking growing from 815,175 90 days ago to 353,122 today (with Alexa ranks, lower ranks are better - i.e. rank #1 is the best site in the world).

Along with this major increase in traffic, we've seen a growth in our core userbase. The following chart tracks our monthly active users - unique Hive accounts that create at least 1 blog post per 30 days. Our MAUs grew from 236 (in August) to 346 (in September). 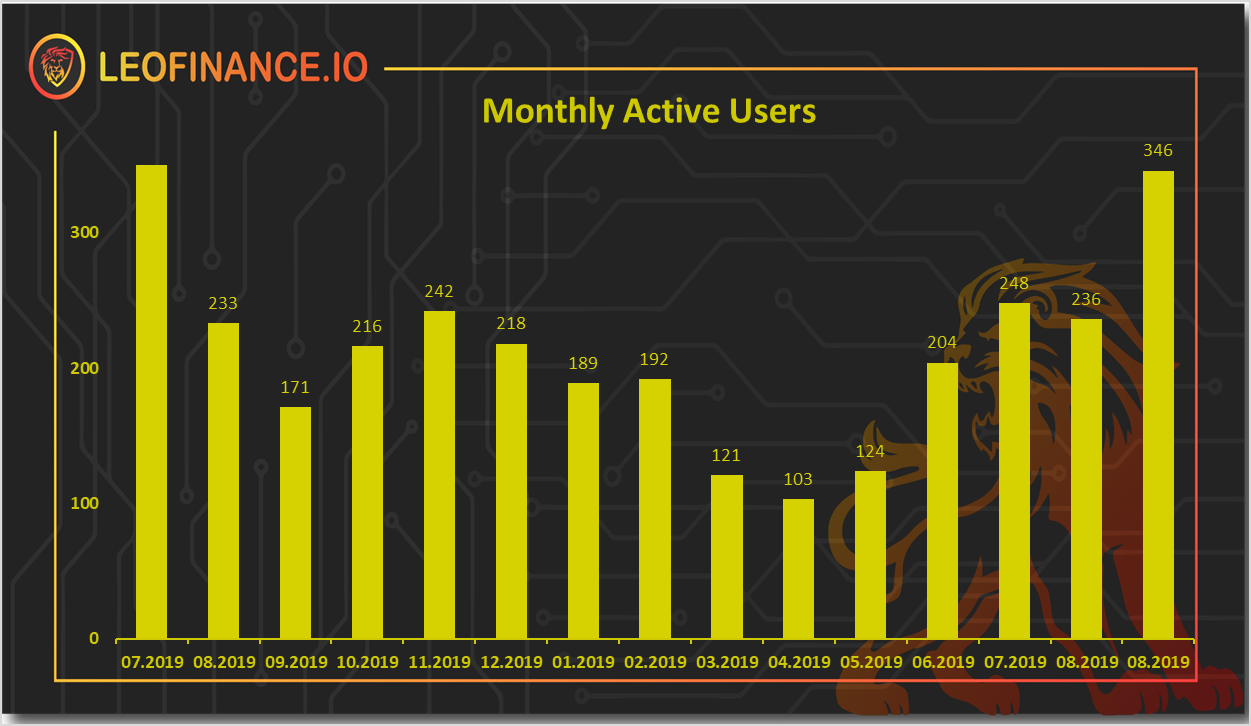 Based on real-time numbers, I believe this growth is still on an upward trend. We'll likely push over 400 MAUs for the first time ever in the month of October. Ad Revenue Since the Launch of the LeoAd Program

Again, the all-time ad revenue has always shown a slow and steady upward trend. Our ad revenue started out extremely low and consistently rose over time (the only exception being the month-long transition from Steem to Hive back in March).

This month, however, we saw an astronomical rise in ad revenue generated per day. Don't take my word for it, just look at the end of August leading into September. We might get copyright infringement on the SpaceX launch trajectory with that chart.

Ad Revenue Per Day for the Last 60 Days

This 60d ad revenue chart may reveal a more telling story. We were seeing that steady growth even before September 1st (when WLEO was originally announced). Since then, we saw ad revenue 4x to hit the all-time high of ~$25 generated in a single day.

Since the peak, we've consistently earned above $20 per day as the traffic has reached a new equilibrium.

In order to see this rise in ad revenue, we've needed a lot of additional traffic to come to our site. The Alexa rank is also pretty clear in this regard. Our average impressions per day before September were around 2,500. 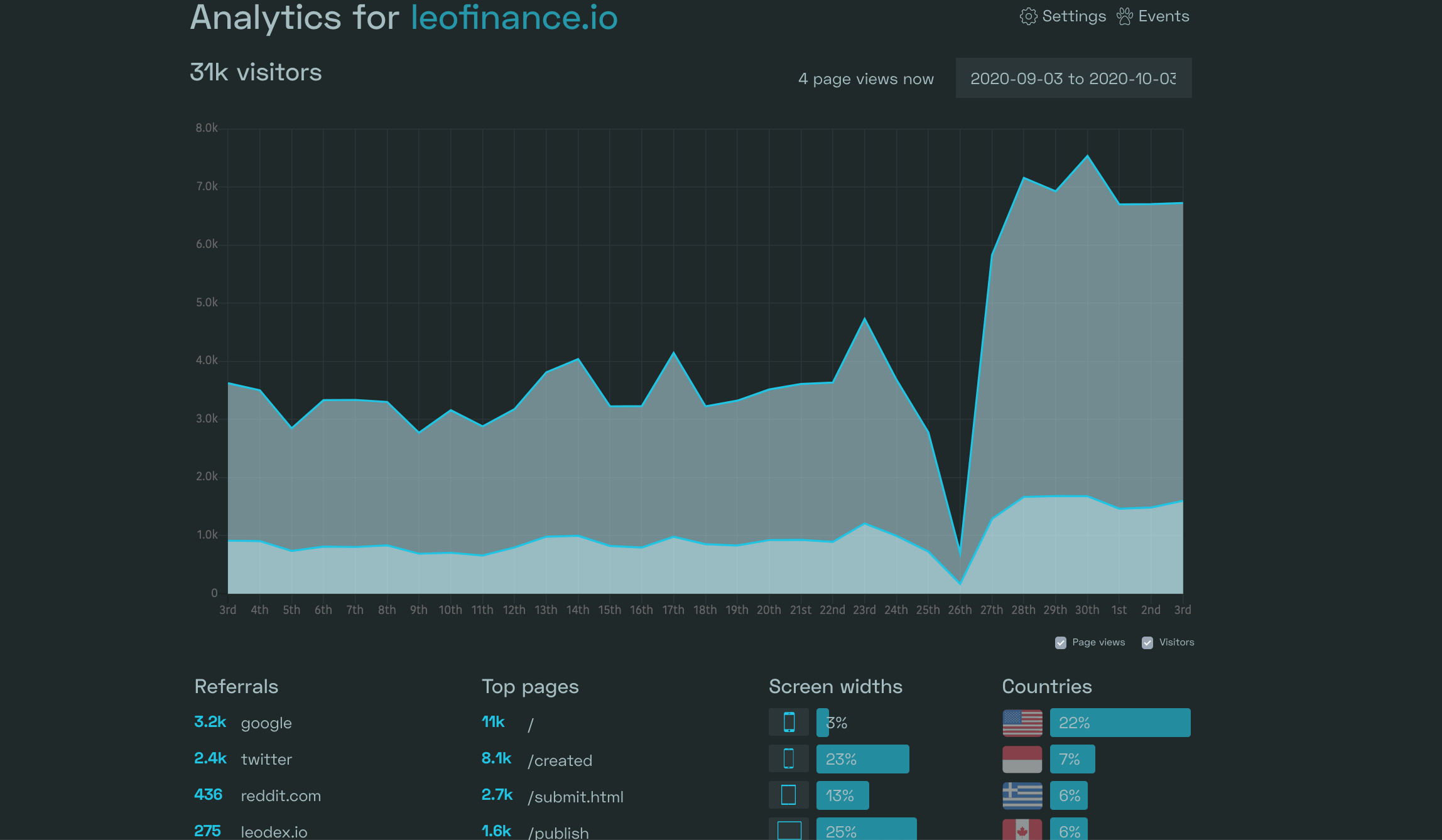 The overall traffic for LeoFinance is - again - an explosive upward trend. We saw 1 day of downtime (only affecting analytics - the site itself was operational) this month (the 26th) which is when our New UI replaced the old one. This caused a ~20hr delay in the analytics reporting (the cause of the dip to near 0 on the 26th in the above chart).

Over the past month, we saw 31,000 unique visitors which generated a total of 127,000 page views for LeoFinance.io. Our main sources of traffic are still Google, Twitter and Reddit but we have seen a recent rise in traffic from other sources due to LEO being listed on CoinMarketCap and Coingecko.

We also have open analytics set up for our other apps. If you'd like to explore those:

LeoApps and Their Contribution to Monthly Ad Revenue

Above are the total numbers for the month of September. We generated $555.53 USD in ad revenue last month which is about 3,472.04 HIVE at current prices.

The ad revenue is paid out in BTC. Each month we buy HIVE with the BTC and then purchase LEO from the LeoDex and burn it.

Due to a higher LEO price, the amount of actual LEO tokens we're burning has decreased. In fact, I have continually set buy orders from the @leoads account and have not been able to get filled throughout September (for the August ad revenue burn).

The buy order for the August revenue has been moved up to 1.58 LEO / HIVE. The ad revenue from this month (September) is being moved into the @leoads account today and will be used to purchase LEO throughout the month October. We're also considering an automated bot which will purchase LEO each day in order to DCA the actual burning of ad revenue. More info on this will likely be posted in the October LeoAd report.

Overall, our ad revenue has grown significantly and is showing no signs of slowing down. One of the foundational pillars of the LeoFinance platform and LEO token economy is our ad revenue buyback program which promotes sustainability.

As we have seen in the past month, when our platform grows in terms of users and traffic, our ad revenue grows as well. This growth in ad revenue is used to buy/burn LEO from the market which creates a more sustainable token price. Some have extrapolated our ad revenue growth out for the next several months and years which gives off some "crazy" price estimates for LEO. [i.e. @nealmcspadden's $2 and $37 price targets for LEO.

maybe a suggestion. Why not Buy ETH with the revenue and use UNISWAP, that way the fees get shared amongst the userbase and it also gives more usage there and that should drive up the price more then leodex? or not?

Great product! Let’s see what happens with the price predictions.

The pump is strong with this one

Ads Revenues are brining cash into the ecosystem which in fact being burned actually is transferred to the users. Not only that it holds the supply at a good level, but it improves the economics and determines a price increase. This is one mechanism that works on LEO and its strengthens it in good or bad times.

P.S. You should add a reminder to disable ad blockers.

Twitter traffic is hitting it good and 31000 unique visitors is amazing, so also is the Alexa ranking in about 3 month, hopefully we can even smash more stats before December.

Closing in on the point where the $550 could be better spent than on burning of LEO. The impact on the overall supply is negligible while there are a lot of ways to use $500 a month to generate growth.

This is something that will likely become more obvious as the token price races higher each month. It is likely that the token price will outpace the increase in ad revenue since markets tend to move faster.

I agree with that @taskmaster4450 but I also think (like @nealmcspadden) pointed several times that it is good to have a "price floor".
In the future will make sense to do a "hybrid" solution mixing buying LEO tokens + other marketing that can generate growth.
For example: Paying for ads, or paying crypto influencers to publish here and bring their audience.

It is good to have a price floor however, at the pace things are going, there is not much of one being provided. I means if there is only a couple thousand LEO burnt each month, that amounts to very little. Even if the ads explode, there is the likelihood that the token price will also explode, especially in light of the user base growth which is apt to accompany all of that.

If there are 15,000 posting, the ads will be large yet the token price will be triple digits. Still only going to get a few hundred tokens to burn.

Really valid points, specially this one:

If there are 15,000 posting, the ads will be large yet the token price will be triple digits. Still only going to get a few hundred tokens to burn.

If it works, dont break it. Traffic stats show it works. Exceptionally good :)

That's true! Or LEO could make a reserve (like cash on a balance sheet) or hold buy orders to create a floor

Should we hit those adds (every now and then ) to increase revenue or not ? Does it make a difference?

damn loving it, clearly the uniswap frenzy and price increase is getting the community hyped up that floor just keeps moving up, and with all the strong hands we have here its going to be tough to get people to part with their precious LEO

For some reason I'm always shocked that the HiveStats site does so well.

Adding that to appeal to the greater Hive community was a great move.

For me, that should have contributed most because even Hive users who so not write about finance and cryptocurrency do need to use Hivestats to lookup their accounts.

Looking at the new stats layer for leofinance usage, that range of $500 worth of ad revenue may be maintained in the coming months.

Congratulations you have been working very hard for over a year and all your effort is being rewarded right now. Keep up the good work and LEO has a wonderful future.

The only thing I don't like about LEO is the token supply being uncapped. In my opinion, the supply shouldn't exceed 3x the current circulating supply.

What should I buy? ETH or TRX