Playing Around With The New VIBES Miner

nickyhavey in LeoFinance • 5 months ago (edited) 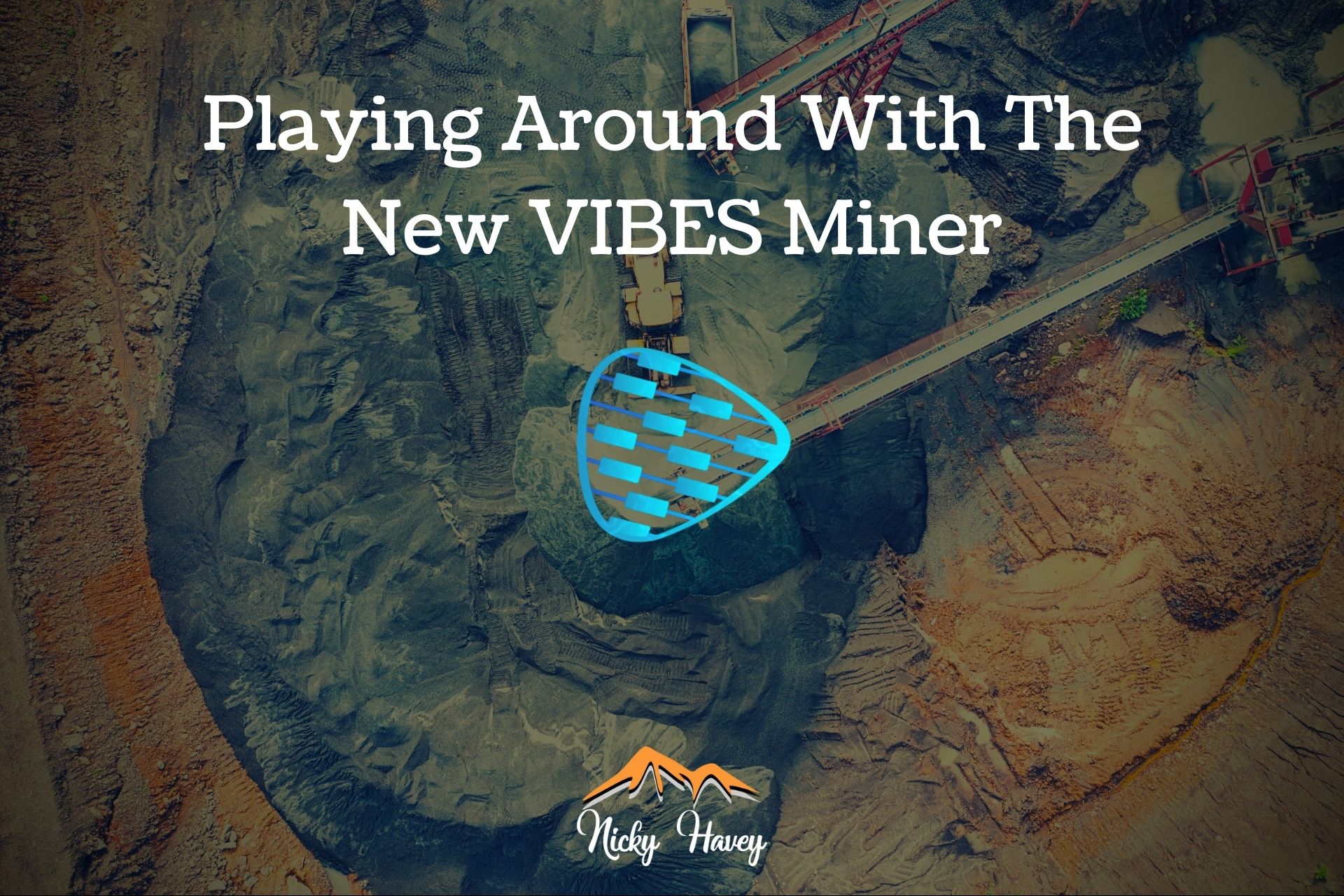 Another miner that came to the fray last week on Hive-Engine was that of a new token called VIBESM, the miner for the VIBES token. As a music producer and someone who's been floating around for the last 3 years or so on Hive, there's not been too many tokens dedicated to purely music here. There were a couple of tokens that came and went during the Hive-Engine token creation craze as things were kicking off on STEEM a couple years ago such as SonicGroove, Creative Coin and TUNES. Creative Coin is still operational but I'm not sure where the project is at the moment, I don't think SonicGroove came over to HIVE and neither did TUNES.

Now, there's a new music project on the blockchain called Music For Life created by @al-gaming in partnership with @risingstargame which has had backing from @spinvest as highlighted in their post here. This is very promising for everyone who has an interest in music and isn't a community just for musicians so if you're a fan of music, you can share your favourite tunes or talk about your latest ear worms in the community.

From the report given by SPInvest, it sounded like AL Gaming had a solid plan with regards to how the tokenomics of VIBES were presented and they launched the miners were launched at 1.5 HIVE per pop which I just had to snap some up at - seemed pretty cheap to me and will see how this goes over time! The miners at that price didn't last too long and think there's only a few thousand miners left 4.5 HIVE. After that, it will be up to those who purchased the miners if and at what price they want to sell at! The miners only earn 25% of the total pool of VIBES and the majority will be given to content that's voted on the platform.

Of course, I'll be sharing my music in both the Music community and using the #musicforlife tag with new releases and some exclusives so looking forward to seeing how this goes! Seems like there's some great things going on with music on Hive with the Rising Star game, @one.tribe.radio, the Music community and now Music For Life with its VIBES token. 2021 shaping up pretty nicely with all these good vibes going around!

Have you got any VIBESM tokens yet? How's your experience been with the Music For Life community? Let me know in the comments below!

I do like that paragraph - all music lovers should unite within this blockchain, so your suggestion might be ideal in my view.

Of course, I'll be sharing my music in both the Music community and using the #musicforlife tag with new releases and some exclusives so looking forward to seeing how this goes! Seems like there's some great things going on with music on Hive with the Rising Star game, @one.tribe.radio, the Music community and now Music For Life with its VIBES token. 2021 shaping up pretty nicely with all these good vibes going around!

Thanks mate, it's the best of all worlds but music and sharing the good vibes is where it's at!

ooh, haven't barely started reading, so I may have to comment again, but the word earworm jumped out at me and I got an idea for the tier names...
What about like: jingle, earworm, song, concerto, magnum opus...
ok going to go read the post now.

Oooo thanks for the additional ranks! I think next month, I'll put all these suggestions together and let the community decide the nomenclature to go forward with and it will evolve over time! It's mostly for fun but also encourages long term thinking so hopefully we'll have a lot of stakers in the community too!

Ok so, I have a few vibesm and I think they're pretty nifty. I think I average about a vibe per day. I'm curious. are the unpurchased miners in the pool atm? what I mean is, as more miners are purchased will the chances of winning the lottery go down?

That's great you're getting about 1 VIBE per day from them , you must have a hundred or so. Yes the miners have to be staked for them to valid for entering the lottery as far as I know so if they aren't staked and just on the open market then there's more chance you will get a winning ticket vs more being staked. That's my understanding but I might be wrong!

Where do we stake VIBESM? and how do we mine?

On Hive-Engine, you can buy the VIBESM token and then you have to stake the tokens by clicking on the padlock button on the right side when you are in your main Hive-Engine wallet. Then that's it. You just wait to see if you get lucky with your miners :)

I am really happy about this new feature, since it is so new that even I am longer on this blockchain :)
Love the project already using the tag for my rising star posts!

Haha! Yeah, almost a week now so you must be a HIVE veteran by now 😜 Nice one! I'm just sharing my music using the tag and hope to get a good stake with the token to spread those good vibes! Thank you for curating @mejiasclaudia !

Thanks a lot Darren mate! Appreciate that 😊

nice to be here when the music scene on Hive is getting going! So shout out too the musicians and music lovers here. Still no idea what a miner is but i will go and get a canary.

Yeah early days but promising! Make sure you look after Tweety!

I have been really happy with the community so far. My miners have been okay, but they aren't going to give me anything to retire on! I am excited to keep staking and watching my account grow over there.

Slow and steady wins the race! I think the amount of tokens is pretty low compared to a lot of others out there so you won't be mining as much but it's not even a week old yet and don't think the first posts have hit the payout yet. Will be interesting to see how that changes things!

Yeah, for sure. It looks like the price of the VIBES token has dropped quite a bit from where it was, so hopefully most of the dumpers have gotten out of the way and we can really see what this baby can do.

Yeah, 1,400 HIVE per VIBE was probably a bit of a stretch in the first instance! It's crept back up since the initial dump but now we're about to see the first post payouts so will see how that affects play. I'll be waiting in the wings with a few buy orders 😁

I am hoping to just make my VIBES posting and mining. It is only about once a week I post solely to that community.

Coming from an old BTC miner with an ASIC rig, I especially like this post. Thank you!

Haha, thanks a lot mate! Liking the hat, I don't have one myself but if I did, I'd tip it to you!

Oh, you can find them.