The B Word Conference Motivated These Celebrities To Buy Bitcoin

I wasn’t joking and I meant it when I said I’m going to tell my kids this was the fantastic four because they proved to be crypto superheroes yesterday.

When Jack Dorsey and Elon musk agreed to be on the B word conference, the whole world expected Elon Musk’s and Jack Dorsey’s opinions to be different. But instead there were both in sync. The main aim of the B word conference was to promote bitcoin. The promotion of bitcoin was done in a way to explain how the people can embrace bitcoin and support the network. They used the opportunity to reveal how the government and the banks are our common enemy. Trust me, people were watching and were educated. A lot of people got aware of bitcoin especially celebrities like Busta Rhymes. 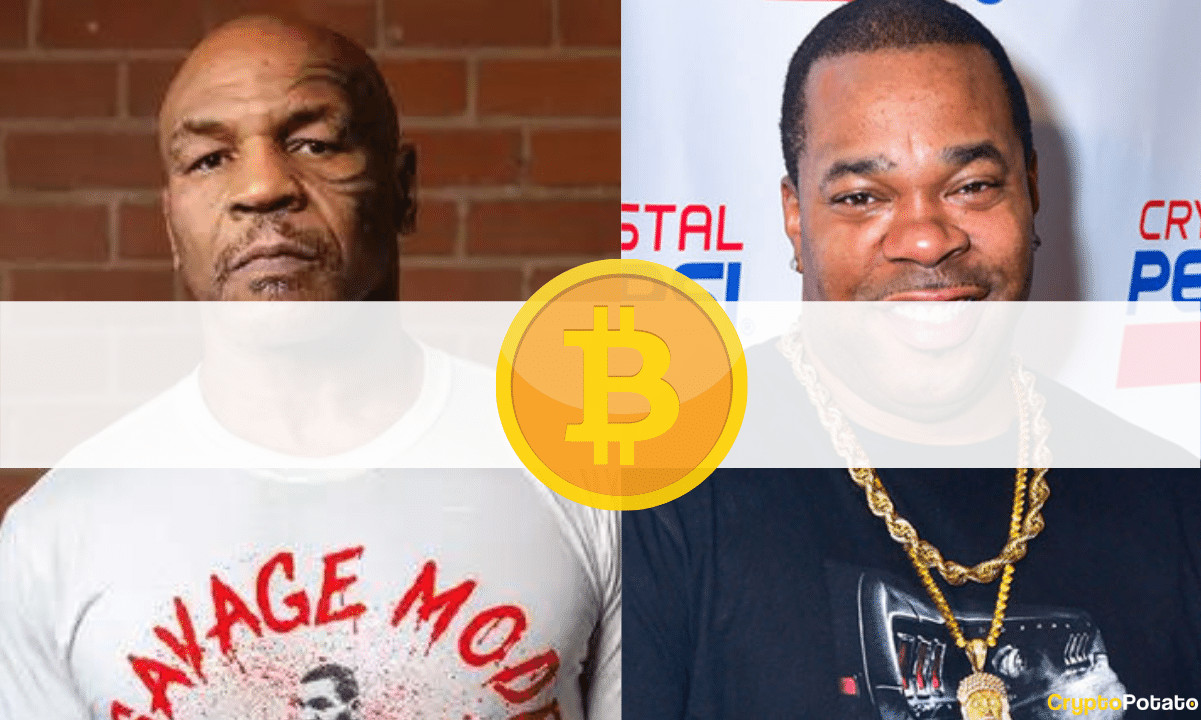 Busta Rhynes is an award winning American rapper. He is very popular and recently he asked his Twitter followers about cryptocurrency. After Mike Tyson tweeted asking Bitcoin Or Ethereum.

He was looking forward to joining the cryptocurrency train. But I think he didn’t find the drive to motivate him into investing. But fortunately for him, the B word conference made him aware of bitcoin and it’s decentralized nature. 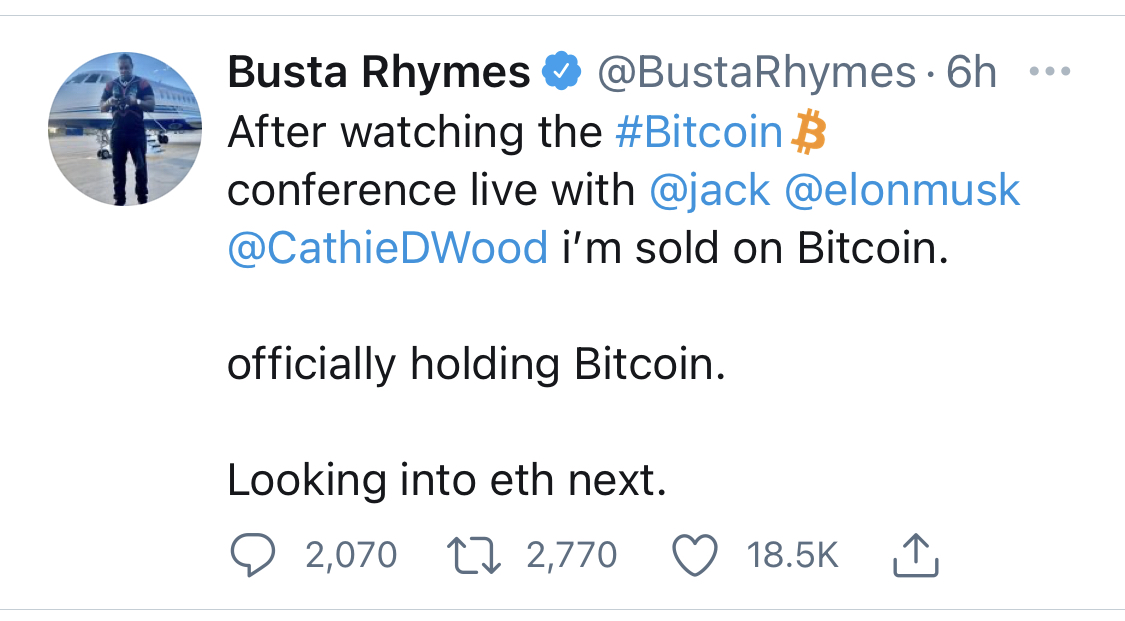 source
He didn’t hesitate to talk about what he learnt from the conference. 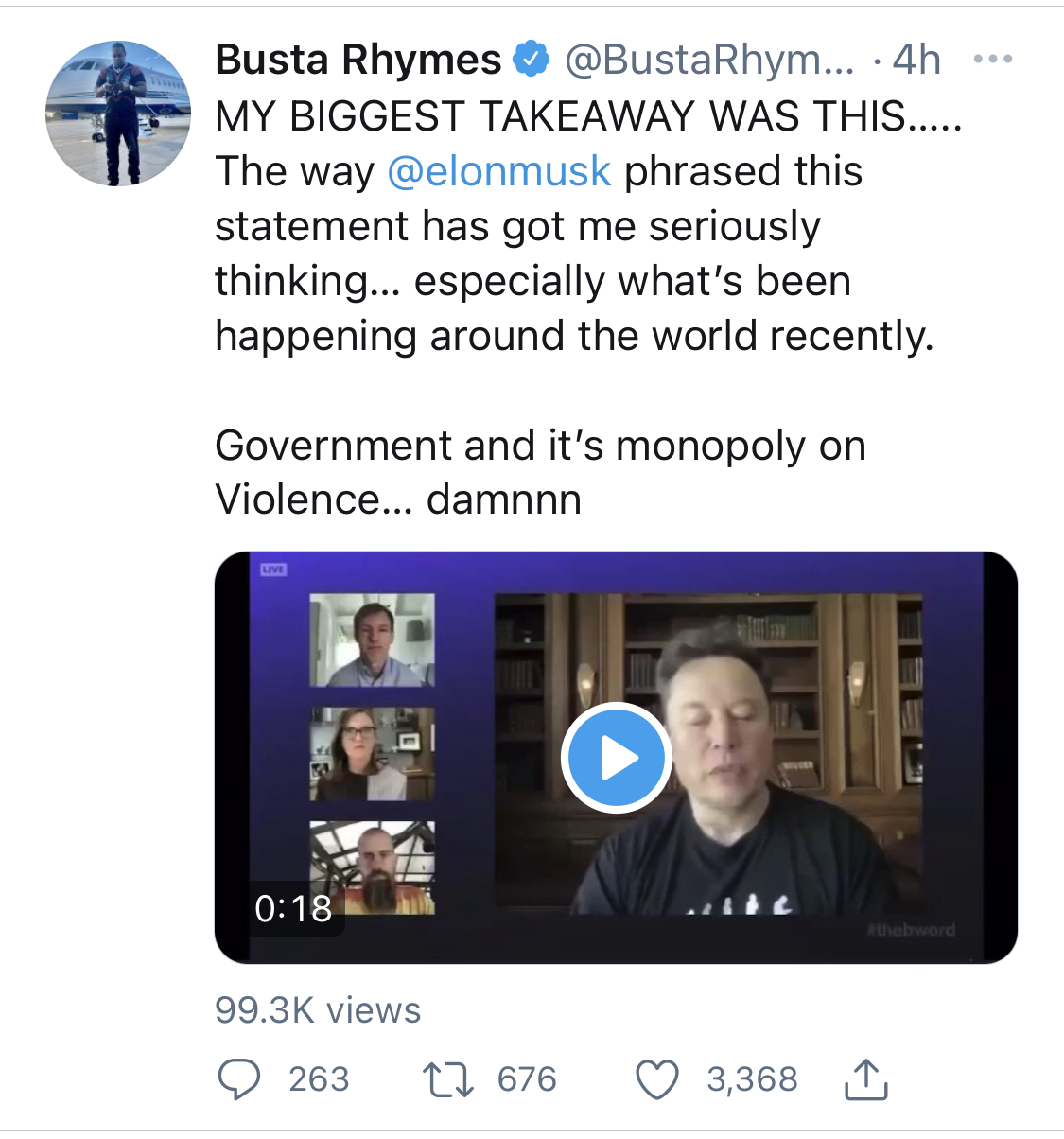 I want you to realize the chain of network that has been created and achieved here just with the conference meeting having both Elon Musk and Jack Dorsey. Lots of people were motivated and it led to those motivated individuals to motivate more people. Just like Busta Rhymes who posted his motivation and interest on bitcoin to his 3.8 million followers. Slow and steady, the world will gradually adapt to cryptocurrency and we will all achieve this financial freedom together.