I would not be too late if I said I am loving the speed :) Right?

Am I?
I know it has been said so many times by the users. Leofinance users have realized the speed of the lightning layers for quite some time now. There were many official posts and tweets from the Leofinance team about this development. However, I got to experience the speed just now. I do not know why my browser or account had to wait for the update but I did not have the speed until now.

Commenting on leofinance is literally 'lightning' fast with the new update. I could not believe it at first as I am not used to this speed. Blockchains are always associated with some lag and we had almost accepted the fate. I knew that the team is working to fix that and I did not take it seriously. I though it would be a minor upgrade and the change would not be visible to users in our daily posting and commenting. BUT, oh boy, I was wrong. I can clearly see the difference and am still surprised how fast the page responded to my commenting command. It was instant, almost better that web2.0. This is game-changing. 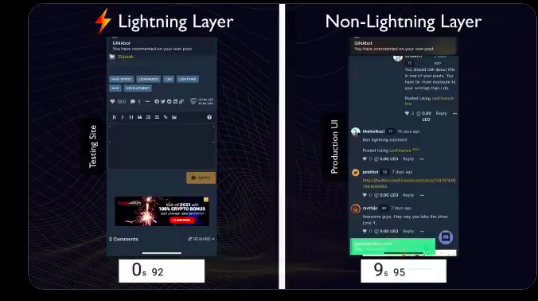 I was listening to the latest Leo Roundtable Podcastepisode this morning. And, I also realized why the lightning speed was envisioned by the team. The team has already mentioned that they are working on a Twitter like platform. The microblogging platform will not function well if it does not have the speed of web 2.0. It would not be ideal if users had to wait even for two seconds. We are okay with it coz we have adapted but the new users would not appreciate it. Hence, the platform needed this feature and the team has worked on it.

I know I am not a Leo whale and the success of the platform will not benefit me or change my position in the monetary term ( kind of). But, I am happy (and proud) that I am one of the early adopters of a decentralized media platform like Hive and got to experience the journey that we are having right now on Hive with Leofinance.

The lightning pace I experienced will definitely impress the new users who will join the new microblogging platform. And, as Roland mentioned in the podcast, I am excited to the point where I cannot hide my excitement.

I am still smiling ear to ear. Imagine that. I am ready for all the commenting.

Commenting from the Leo website was indeed a bit of a delayed process. Let’s see with this comment how fast it is but I’m glad that it was fast for you!

Glad that you noticed. Not only that, the posting experience is also smooth. I am waiting for that killer Twitter like app the team is working on :)

Especially on my smartphone I love that speed

Yeah. It's noticeable. It's blazing fast.