Are We Heading Towards A Capital Crunch?

It fuels everything. This is at the core of our progress of society. All development, technological or otherwise, is funded through capital flows. This is something that has been with us for many decades.

The question is are we entering an era of when it will stop? This is something the few consider yet it is perfectly valid to look at.

We have a major storm potentially brewing and few seem to be bringing it up.

At the core of the issue, at least for the developed nations, is we have a lot of old people in the making. Nations are aging and the demographics are not pretty. This is going to create a host of issues, from healthcare to taxation. How are countries going to handle this?

We all know that as people age, their productivity starts to diminish. Throughout the careers, they work in an ascending fashion until they get near retirement. That is when things start to wind down as all extra money is poured into retirement accounts. Of course, the day eventually comes when the person leaves the workforce altogether.

It is easy to see the economic impact through the loss of productivity. However, what most do not consider is what happens when all that capital dries up?

When people retire, they tend to remove their money from markets. The tendency is to get more conservative in what they do with their money. This leads to market pullbacks while also hindering investment. As the money is directed to sustaining oneself, the productivity of those dollars (or whatever the currency) declines.

The challenge is that many countries are going to see this happen with millions of people over the next decade or two. In the United States alone, it is estimated there are more than 10K Baby Boomers retiring each day. These are not only removing their skills from the workforce but also taking their money with them.

We all know that country entered a demographic crisis in the mid-1990s. Since that time, they battled horrific deflationary pressures, pulling out all stops to try and reverse the trend. The problem is that little worked. No matter how much money was thrown at the problem, the demographics could not be overcome.

This is something that shows up in the asset clases.

Here we have a chart of the Nikkei 225. Notice how it never got back to its all-time high. 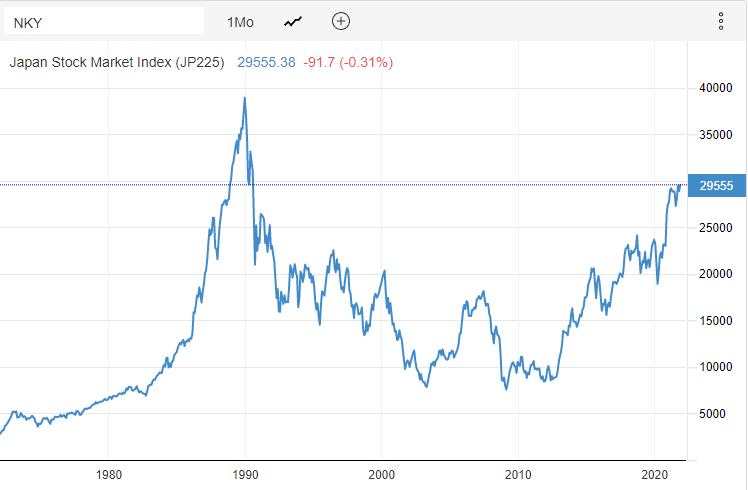 Even after the run up the past decade, the index is still off more than 23% from where it was in 1990.

People might point out that it was in a bubble. While that is true, the same point could be made about the equity markets in the US on a number of occasions and yet, today, we are sitting at new records. Hence, over time, even bubble levels can be surpassed although it could take decades.

Then we look at real estate. Tokyo is the world's largest city by population, accounting for near 1/3 the country's population. Nevertheless, we see a similar result in that sector. 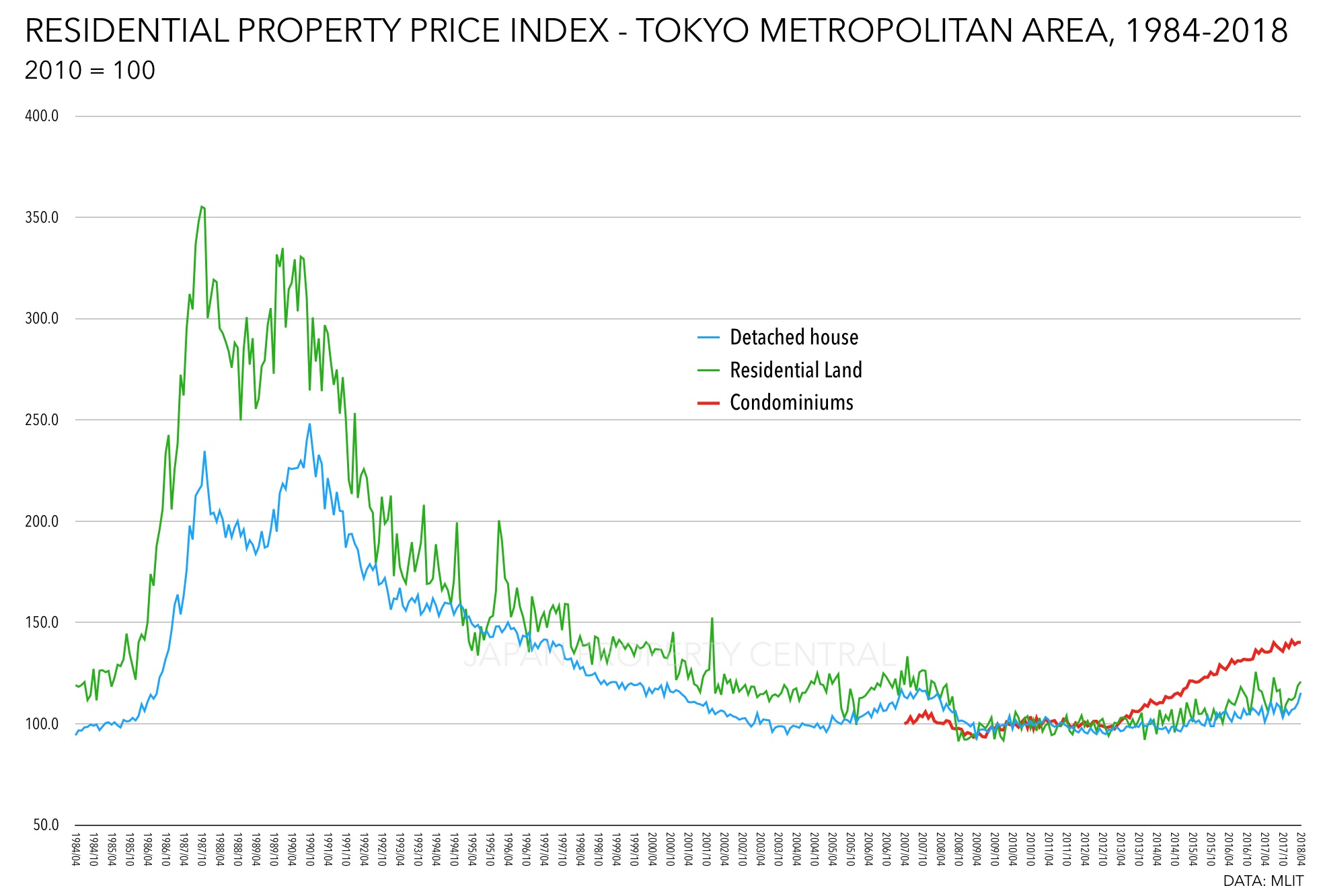 The problem with both of these example is there is a great loss of wealth. Few are able to time markets, especially when they take on "bubble-popping" proportions. The fact that they are still far below the highs set 3 decades ago shows how dire the situation can be.

We are likely to see a similar situation in many countries of the developed world. Some of the largest economies are on the verge of getting hit. At the top of the list is China.

There is little doubt that country experienced a huge run up in the price of real estate in that country. Over the last couple decades, the building that took place is stunning. They really were able to construct a lot in a relatively short period of time.

The problem is that, if it all crashes, the loss of wealth by the Chinese population will be enormous. This is not like the US housing bubble that was built on "liar loans". With this situation, people were putting down as much as 50%, while signing multi-generational mortgages.

Just consider what could happen to a city like Shanghai. It could easily follow what happened in Tokyo. 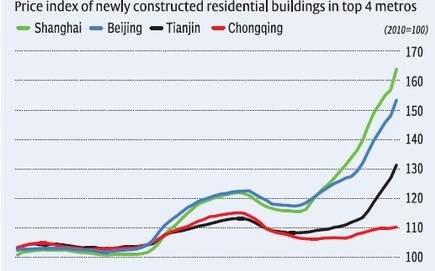 There is every reason to believe that China is going to follow Japan down the demographic hole. The country had the one child policy in place for 40 years and it means that the country has a peaking population. There is also a great deal more males than females of child-bearing age. It is a situation that prevents the kick-starting of a baby boom.

As nations age, where will their economic productivity go? Will they follow Japan, realizing a slimming down of everything? If so, this is going to have a tremendous strain on capital since it is going to dry up.

This is just another reason why cryptocurrency is crucial going forward. We need to get as much wealth in the hands of the younger people around the world to fund technological expansion.

Yeah buddy! It's going to cause problems for sure. Except crime. Violent crime is almost exclusively perpetrated by 20 year olds, so crime should go down.

But like many other things, the USA is at an advantage here. What can an aging dying China do except suffer? A dying Europe has already imported a ton of young workers from Muslim countries and we've seen the problems that has caused. The US by contrast, gets to import Latin Americans, who are very close to us culturally. There will be some problems sure, but the USA has the fewest problems when compared to other nations.

So many people made a killing in the bubble from 80s to early 1990s in Japan, they didn't even have to be in the markets. Normal everyday jobs were paying well with bonuses one can only dream of now ( well so I heard ).

They only made a killing if they got out. Many tend to ride things up and then ride them down.

🚶🏾(Me going to move up my stop loss positions )

It's just another reason to automate everything. If you can't get the labor from the workforce, just build machines to do it. It's worrisome that the entire labor market will change and I wonder if people complaining about how much they are paid to actually work.

That is what Japan did in the last couple decades. The GDP is bounced in a range due to the automation in spite of horrific demographics.

Very interesting. I was just commenting on a post the other day that I don't quite understand why people hit their magic retirement number and just pull it all out. I'd much rather keep it invested and live off the interest so I never have the issue of decreasing principle. It makes sense in my head anyway. In practice it might be more difficult.

Depends upon where you are at in life. Most do not hit the number while will having a long time to work. Instead, they hit it (or get close) when they go out.

That means bringing the money into something more conservative. We are not going to see that rolling into start ups.