Cryptocurrency And The Great Resignation

Over the last few months, I wrote a number of articles about the workforce and some of the trends that I see. In short, we are going through a paradigm shift that few expected. While some seem to think it is temporary, this is in keeping with technological evolution. This is not out of line.

What is causing this, at least in part, is technology. Advancements in communications, storage (cloud) and software is allowing for remote work. This is opening up a great deal of possibilities.

This also appears to be coupled with the idea of people re-evaluating their lives. Since many were mandated to remain at home, they started to interact with family and friends in different ways. The idea of sitting in traffic for an hour and a half, each way, started to lose its luster.

It is now being called The Great Resignation. Workers are leaving jobs at a pace never seen before.

This, however, is something that employers better start to embrace. Their future is not going to look like the past. 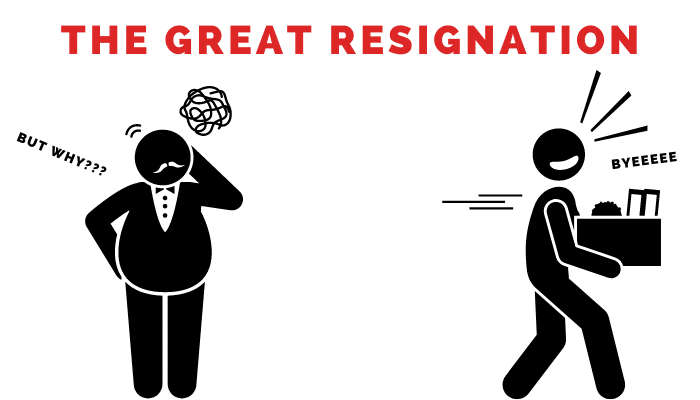 What is causing this power shift in the employer-employee relationship?

There are many factors. At the top of the list is the changing demographics. Since the late 1960s, when the Baby Boomers entered the job market, employers had all the power. As unions lost their power since automation was making their members obsolete, employees were on the short end of the stick.

Through the 1970s, the number of workers kept growing. Once the Boomers were in the workforce, there was an extreme shift in the power dynamic. For much of the last 40 years, this was the case.

About 5 years ago, the Boomers started to retire. This process was going to accelerate as more of that generation reached the time when they could leave the workforce. COVID seemed to accelerate that process as many decided to simply retire, rather than return to work.

This is leaving a large gap in the number of workers available. It also is creating a generational conflict where the remaining Boomers are at odds with the Millennials. The later does not necessarily ascribe to the same beliefs and value system as the former. They also understand technology a great deal better.

Unfortunately, many companies are slow to realize this. They are operating as if it is 2019. Well, the world changed completely since then. Since there is a power shift, people are beginning to take advantage of it. Those companies that keep operating in tyrannical ways (usually led by a Boomer) will find they are not only missing out on the best employees, their talent starts to leave.

There are some who theorize that cryptocurrency is part of the equation. While I can see this being the case in the future, we are not at that point yet. To state that many are quitting their job because of cryptocurrency seems like a stretch at this moment.

That said, there is little doubt that, as the industry expands, more people will be making their living this way. Content creation is the basis of Web 3.0, something that we are laying the foundation for. Once that branches out, we can see tens of millions opting to get rewarded for their activities online as opposed to dealing with a "job".

When this does occur, whether it is from DeFI or Play2Earn, the employment pool will take a further hit. This means that companies better usher in automation as quickly as they can. We are seeing something that is not being driven by the corporations. Instead, it is, and will be, employees who push this.

Many think that cryptocurrency is only affecting the financial and banking world. This is not the case. If we see a massive explosion in value, presently millions with opportunities to benefit, we will see most industries affected. Labor is leaving the building and might be doing so in large numbers.

I feel this is a most likely scenario since the expansion of our digital world is almost guaranteed. Blockchain and cryptocurrency will further alter the "work life" for the average person. New opportunities are going to keep arising.

The bottom line is that, if employers think it is tough to find workers now, just wait a few years. By the middle of this decade, a fair portion of the Boomers will be out of the workforce. At the same time, cryptocurrency will be at a point where those who are technologically adept will have other options.

This means that a large part of the Millennials and Gen Z will find their way into this arena. With the growth rate expected, in both users and wealth generation, they will find this more than sufficient to meet their needs.

Employers are going to have to get very creative if they want to get quality people. It is not going to be easy.

The Great Resignation is upon us and it is not going to stop.

This is serious and is no way of ?

The existence of cryptocurrency have really helped a lot despite some countries not accepting it that is another way of making money illegally but still its still helping lives with more people trooping in the blockchain.

With everything going digital, I wonder if people will opt to just hire people from underdeveloped countries. After all everything is digital so I don't think we will be required to be in the US for most of the job. Even meeting people can be done online instead. Either way the market will be different in the future and those slow to adapt will fade away.

With everything going digital, I wonder if people will opt to just hire people from underdeveloped countries

Definitely! There will be some problems with communication and understanding at the level of mentality and foundations, but everything is coming to this. I'm not saying that both sides will win... In any case, it will be interesting to see what it will lead to ...)

It will depend upon how quickly the remote work situation can be adopted.

The Great Resignation operates on a different level in my opinion. This is tied to other factors. Where the jobs end up, my guess is everywhere.

Why would highly skilled people prefer to work for a corporation rather than make a living by being a part of a decentralized community? The latter has many appeals. Perhaps the main appeal of the former is still the better income security. This is something decentralized communities will have to address, as relying on ever-increasing crypto prices doesn't seem to scale well.

Why would highly skilled people prefer to work for a corporation rather than make a living by being a part of a decentralized community?

Depending upon the job, a healthy paycheck guaranteed.

For example, few can turn down Silicon Valley's money.

Honestly, there aren't many downfalls to a remote workforce as long as accountability can be maintained

A lot is starting to be written about this, and I am learning and assimilating these ideas.

I agree that we are seeing a shift in power dynamics, which some employers see and others are blind to..
Those with eyes to see and ears to hear, are learning to adapt and change to the new employee employer dynamic.

While many employers still treat their employees as disposable pieces of machinery, others are awakening to the need to motivate employees to stay and perform well by giving them something in return, that they value.
For some it's a stake in the business, but for others it's something cheaper like time off, paid sick leave, maternity leave, longer breaks, looser dress codes or even video game playrooms for down time...

Times are changing, the employers who evolve will survive, the others, will go the way of the dinosaur and dodo bird.

Yes it is an interesting situation we are witnessing. Few are taking the time to truly see what is taking place but that is always the case.

Then it hits them in the face like a brick.

It appears a lot of the power is shifting towards employees. Of course, once companies embrace this concept, they can attract the best workers from all over the world.

So in the end, it might end up as the same situation, just with a different front end to it.

Cryptocurrency is changing the world gradually and we see people now tend to understand that some jobs don't actually worth their time. Crypto will produce a world where there will be abundance and some level of equality.

Technology is the future and we must embrace it.

Technology is the future and we must embrace it.

This was always the case, at least for the last 200 years. The only difference is more are aware of it today because things are happening so rapidly (and people like me are online writing about it LOL).

With crypto being the only industry where you can hope that your wealth can be stored for the long term I have to agree that it will only accelerate the process.

I always look at my transition as an example. I came as a curious investor and ended up as an educator for newcomers that is actually making a living from working in the industry and not only benefiting from its rise in popularity.

We will have the ebb and flows that come with the bull/bear cycle. Many are jumping in due to the fact that prices are up. When we have a downturn, many will be forced back to work.

However, over time, through the different cycles, more wealth will be created and spread around. You story will be replicated millions of times.

@taskmaster4450le I decided to not work as employee and also not travel outside my home country for employment for lifetime and insha Allah I will do it, because there is no need work as employee if we have better alternatives to earn while staying with over family and friends, world is global village there is no need to travel out the home country for employment because all facilities are available now in every country