Cubfinance: Opening Up A New Chapter

Getting the first one in anything is always difficult. In business, this takes on even more meaning.

Basically, the easiest path is to build success upon success. Of course, to do that, one needs success first. This can be hard when starting from scratch.

We recently saw Cubfinance embark upon an new chapter in its evolution. This is one that could be extremely beneficial to token holders.

Obviously, we are referring to the recent LaunchPad that was released which brings IDOs to market. This is something that is becoming very popular within the DeFi world and Cubfinance aims to be a part of it.

In fact, the goal is to position it at the upper end of the second tier. This means it will not get the biggest projects yet it will be able to contract with some rather large players.

The concept of the Initial Dex Offering is similar to the ICO craze of a few years ago. However, instead of doing it through an individual website, the fund raising takes place on the decentralized exchanges. In this case, it is occurring on Binance Smart Chain (we can debate the level of decentralization another time).

What we are seeing is a simple concept. The project sets an amount it seeks to raise. Whatever comes in is split 50/50 between the project and Cubfinance. For the first IDO, the amount of $250K total with each party get $125K.

What this does for CUB token holders is that it provides some enormous buying pressure. All of the funds that Cubfinance receives go to buy CUB and burns them.

Success Out of the Gate

It is nice to be able to report that success was attained through the initial run. The amount of $250K was raised meaning the IDO sold out completely.

Selling out the IDO was vital. This sets a track record, albeit a short one. It tells other projects looking at Cubfinance that it has the potential to hit the targets that are set.

Of course, this did translate into tokens being burned.

The first IDO resulted in about 180K CUB being purchased and burned. Compared to the total supply, this isn't a great deal but it is vital to keep in mind that it is just the first IDO. There are more to follow.

What it did was move the total tokens burned to over 400K. This is important since the next IDO is going to be much bigger. It means the total burned, if the IDO is again successful, will by larger.

It is crucial to get the first one in the books.

The IDO is no longer a concept on Cubfinance. The fact that one was completed means it is a feature of the platform. With 3 more under contract, we will see a few more months of these taking place.

Here we have a way to start building some momentum. Obviously, when talking to other projects about potential IDOs, we see how there is something to point to. The team can refer to the first one completed with 101% of the tokens sold.

Hopefully, we see a similar result, only with bigger numbers, on the next one.

This will allow for the prospecting of projects knowing they can depend upon Cubfinance getting them the money needed. Naturally, we cannot expect everything to sell out but raising significant funds is for each project is crucial.

Of course, this is just one facet of the entire platform. We are now seeing the offerings expanding. With each IDO, there is the potential to offer another Kingdom to the user base. This will also allow the projects to view Cubfinance as a second liquidity pool option depending upon where their first one is located.

One of the things that we noticed with the first IDO is the project team put announcements on Leofinance. This is something that we can expect to continue.

A main premise of Cubfinance is to generate traffic for Leofinance. By the community stepping up, it shows the power of what is forming here. We know that this is a site that, while not the biggest one on the web, does have passion.

Therefore, as more development takes place to enhance what is offered on Leofiance.io, we will see Cubfinance and, eventually #ProjectBlank, as feeder systems into this site.

Speaking of that, that project will be a fork of the mobile application that is going to come out in the next couple months. 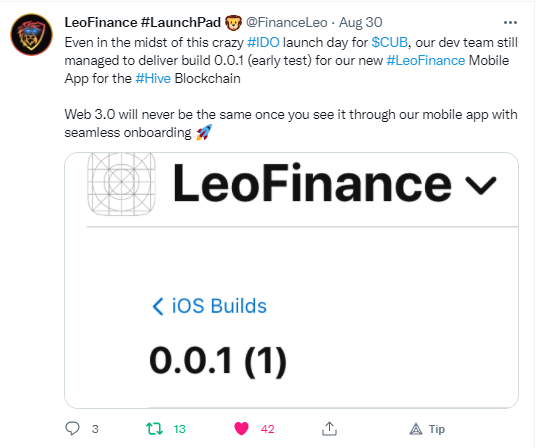 This could be available for some beta testing in a couple of weeks.

For those who are involved in Leofinance, things are really starting to come together. We can now begin to see how it is all tying in.

It is often hard to be patient but we can see things falling into place.

I'm really excited with the way it turned out! Smooth sailing...

The first one was very successful from the Cubfinance point of view.

We all should be happy about that.

But not from investors point of view, and that counts!

Yes, put one in the done column for Leofinance/Cubfinance IDO Launchpad!

So CUB was created EXCLUSIVELY to put BUY PRESSURE on LEO. Yet both CUB + LEO fell flat during a clear bull run.

Now these dodgy ICO-like money grabs (rebranded as "IDOs") are sensationalized as putting BUY FOCUS on CUB and allegedly the BURNS should make CUB more scarce, hence giving people the illusion that this is somehow a superior system and therefore the price of CUB will PUMP.

LEOFINANCE is really just a mechanism to find ways to get folks to depart with their real money.

NO PATTERN of growth to be seen.
Both of users and price action.

The lack of hype and engagement over anything Leo around here shows that even the most loyal users aren't really impressed.

NO PATTERN of growth to be seen.

Seem like $125K was just generated in revenues for the service.

That would constitute growth wouldnt it?

Well said Task. This funding campaign was really smooth and exciting!!! Cub Finance community hit the ball out of the park with this one. Looking forward to many more of such rocking IDOs.

It is a service that could be very successful for the platform. Generating revenue for the ecosystem is important.

We will see it growing if it continues to be a success.

I am still waiting for the Polygon-related IDO launch. Let's see when that happens. It's cool to set foot into a new blockchain platform.

Flawless execution from CUB/LEO Finance team even if things could have been better on CakePop part. Nevertheless the pilot achieved its milestone and I think this will pave the way of other IDOs to come to the space!

It is Cubfinance that I focus upon. The project didnt really impress me that much.

I didn't really take the time to learn how all of this works. I find it all bit confusing at the moment so I decided not to participate. I figured I would see how it goes and then maybe take part in the next one. It seems that most people think it was a success, but the price of CUB hasn't really reflected that yet. Not the way the hype would have led me to believe. I still see good things long term. I just am a bit in the dark on this one. Too much going on in real life.

When you look at the market cap of Cub versus what was raised, the buy was not that large in terms of percentage. The other IDOs with bigger raises should have more of an impact.

They went with the smallest one first.

Ah, okay. I am still trying to figure it all out. That does help though.

Wow,thank you for the update of opening a new chapter.congratulation on your new achievement.

I didn't participate in this IDO, but I watched it carefully and it looked like it went smoothly from the launchpad perspective, which is what I care about.

I have some.CUB in my HIVE Engine, but don't know what to do.

The android app is yet to be developed.

iOS could be another cool avenue to bring tons of users to Hive. Brave browser ran into some problems with Apple for giving BAT for users. Don't know if that'll be an issue. I haven't followed the news closely enough to know much.
!PIZZA

Did you know PIZZA team has a curation trail with 29 followers? (2/10)

I’m glad it did succeed, cannot wait to see more the next projects. Also, I would love to see an equivalent to Syrup pools from PCS.

Certainly agree Task, with the CubFinance side of this 1st IDO going well. Having elected to "do it for the team," though, not so sure at all about the other side ...

I think it will be important, in future IDO releases, to clearly classify what the IDO "launch" is supporting. Being a part of launching something that has a reasonably high degree of confidence in being successful is far better than launching a "dud."

That said, I can hardly wait for PLEO and the launch of IDO #2. I truly hope what we build on the Polygon blockchain is even bigger than what we've built on BSC.