taskmaster4450le in LeoFinance • 2 months ago

Many of my posts focus upon technology and the importance of how it is affecting everything around us. We are now involved in something that was never seen before in terms of the pace of innovation. Thus, disruption can come at any time and is occurring at a much faster pace than in the past.

It is easy to see how things can change in hindsight. For this reason, I want to share some pictures from an article I can across today. It really denotes the evolution, and decline, of an entire industry.

This is something that went from peak to trough in about 40 years. Looking back, the signs were there but few of us were conditioned to look for them. If you would, take a look at the images in this article. It does a great job at showing the evolution of the industry.

The first thing we notice is the original digital camera that was created by Kodak in the 1970s. As we can see, it was big, clunky, and expensive. This was not something which was going to reach adoption. It was, however, the future, albeit unbeknownst to Kodak.

This is the prime example of a company that did not realize how its industry was about to change. No, cameras did not disappear, at least not for many decades. The challenge for Kodak is they were a film company. Their business was in selling film. The cameras were just an end to that means. It is why companies will often give away the razors, since they prefer to sell the blades.

We also see a picture in there that discusses the disappearance of film. Over the decade after the first digital camera emerged, things improved greatly. Ultimately, in the 1990s, the Japanese camera companies finally broke through. The likes of Nikon, Canon, and Fuji all brought out lines of digital cameras. These companies did not identify themselves as film companies.

Nevertheless, their run was short-lived also. Within 15 years, smartphone became popular which meant that people had a camera in their pocket all the time. While the early models had crappy cameras, the last decade of advancement saw incredible progress. Now, most pictures are taken via the smartphone.

Thus, we saw near the entire market for cameras disappear. The only ones who buy them today are the professionals or serious hobbyists. These people are willing to drop $1,000 on a camera as well as $1,500 for each lens. In other words, they are serious about what they are doing.

For the rest of us, we pull out our phone.

The camera industry is pretty much dead. Kodak is toast. Companies like Canon, Konica, and Ricoh are no longer in the business. Nikon is a shell of itself, focusing upon the higher end while Fuji shifted into other markets.

Nevertheless, this move, even though it basically destroyed an industry (two if you count camera and film as separate), photography as exploded. The number of pictures we take each year keeps on growing. In fact, we keep setting records, and by a wide margin.

What does this amount to per year? It is hard to say since there does not appear to be much data of late. The most recent information goes back to 2017. 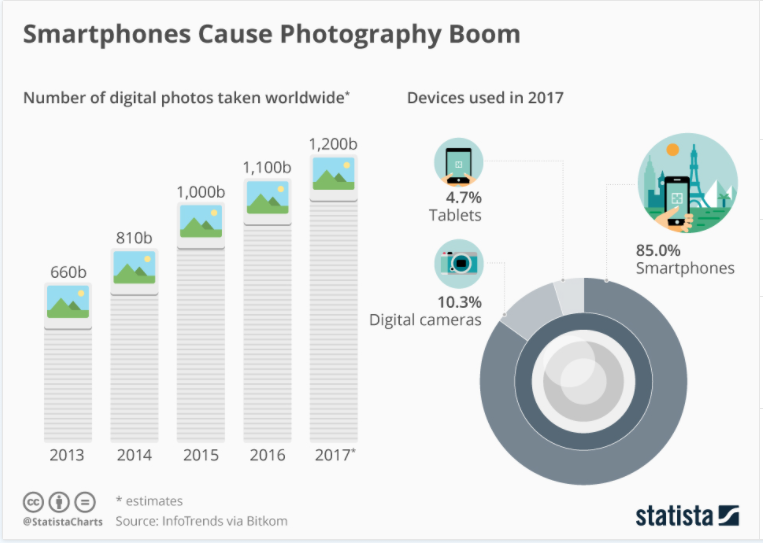 According to this, 85% of all pictures were taking on smartphones in 2017. This can give us some indication of how rapidly the number of photographs is increasing. This would put us near 1.7 billion by the end of this year. That is a huge increase from the start of the chart above, where we were at 600 billion in 2013. Of course, this is just an estimate based upon the new users having the same habits as the existing ones. It is very possible that new smartphone users end up taking more pictures since they are now entering the developing countries. Therefore, having the ability to take photographs so easily and for near zero cost could be something that really is utilized more than in the developed world.

Either way, there are a lot more pictures being taken in 2021 than were in 2017. This is a presumption we all can agree upon.

The question is what will happen down the road. There is another industry like the camera industry waiting to be obliterated. The difference is that it might not take 40 years to completely disrupt. We could see things happen similar to this in a decade or two.

Technological evolution is something to pay attention to, especially when it comes to investing. Kodak was considered one of the safer companies. This was a steady performer over many decades with a large market share. While not a monopoly, it was pretty close in terms of its global dominance.

Yet it is out of business and lots of people lost money hodling onto that stock. I am sure there was an idea that it will bounce back. There were likely a lot of reasons tossed out by the financial media as to why the stock was not performing.

It is my guess that few were pointing to technology, at least early on. In fact, when you got your first smartphone, did you say this is basically the end to the camera industry as we know it? Most likely not.

Nevertheless, this is the mindset I think we need to have. When it comes to getting our hands on something new, we need to ask what companies could this put out of business. We also should be looking at which ones will be enhanced.

Let us utilize the camera industry as model for what can take place. It is happening elsewhere.

The question is whether we will see it or not. Hindsight is always perfect yet rarely profitable. If we want to make some serious money, getting ahead of the curve can really help.

Verily technology is evolving it has even evolved to new levels. Thanks for sharing❤️🌼

quote from wikipedia. It made me lol :)) the company is not dead it seems and it's trying to reinvent itself.

Yeah it tried that and it went nowhere. Where has it been the last 3 years?

I can only see the number of smart phones going up. But do you think the smart phone will be replaced at some point? I think we might have something more like a hologram or implant inside your body.

Yes the smartphone will be replaced. With what and when I have no idea at the moment. I would say holograms come into the picture somehow but who knows. What I do believe is that screens will be a part of our past at some point.

I see the situation with kodak pretty similar to Nokia. Both have refused to go with the flow. From what I know Kodak has been involved with crypto at some point.

An excellent example. Nokia did the same thing with mobile phones. They held onto the idea of what they had, ignoring what was taking place.

In fact, when you got your first smartphone, did you say this is basically the end to the camera industry as we know it? Most likely not.

Something close to that. Also I think selfies were a thing before the smartphone. It was just more sumptuous / time-consuming.

Nevertheless, this is the mindset I think we need to have. When it comes to getting our hands on something new, we need to ask what companies could this put out of business. We also should be looking at which ones will be enhanced.

I got so many comments on using Amazon in somework places (from people working for an american consulting firm - no offence. Some times it is real hard to grasp how far the decision reach - or some populition would be gone already/mitigated.