The Legacy Automakers Are Done

This started brewing more than 40 years ago. Sadly, for those companies standing in the way, it is only getting worse.

They say "history does not repeat itself but it does rhyme". It is the case in the automotive industry. For anyone old enough to remember, we saw this all before.

During the 1970s, the American vehicle market was the largest in the world. It was dominated by General Motors, Chrysler, and Ford. These companies ha roughly 50%, 25%, and 13% of the market share respectively. They were American institutions of great power.

It was also a point of pride for many. These were household names that were at the forefront of the American economic might.

That was all to change. As we know, these companies no longer dominate the United States car market, let alone the world. In fact, GM and Ford have very little to do with the European market. This shows how far the mighty have fallen.

Sadly, it is about to get much worse.

There is little doubt the world is in the process of transitioning to electric vehicles. While many might debate this, we see the percentage of EVs in relation to total sales growing. Also, the Year-over-Year (YoY) rate is near 100%.

Here is a chart from Insideevs.com showing the growth rate over the past 6 years. 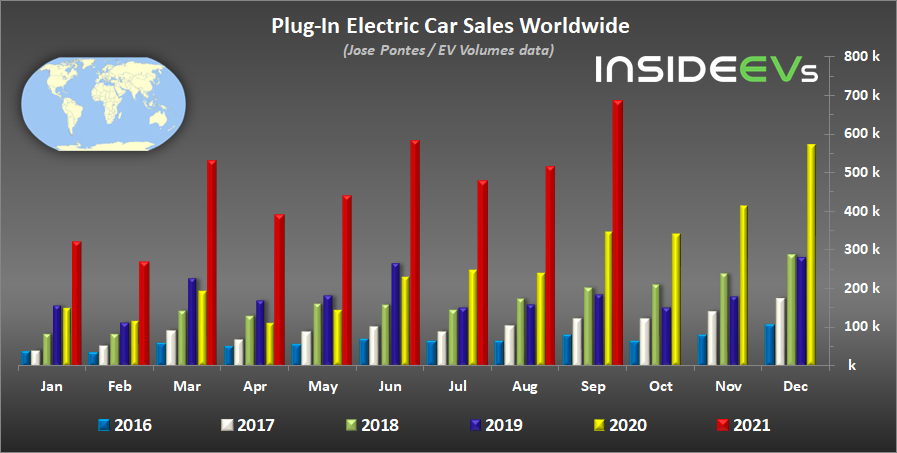 The advantage to a chart like this is it removes the seasonal adjustments that the industry has. We can clearly see the comparison of each year by the individual month. The key to focus upon is 2021, denoted by the red line. Notice how much of an increase there is compared to the yellow (2020).

This is how disruption looks. While it is absent any context to the overall market, it does exemplify the growth rate.

To get some context, this is what the article stated:

So far this year, passenger plug-in electric car sales stand at almost 4.3 million (more than in the entire 2020 - 3.1 million), while the market share increased to 7.0%. It's expected that in 2021, plug-in car sales will exceed 6 million.

Globally, electric vehicles now account for 7% of car sales. This is a huge bite out of the total market. Of course, simply by looking at the chart, we know it is not likely to stop anytime soon. Perhaps, next year, this number jumps to 10% or maybe even 12%.

There are only two electric vehicle manufacturers in the world. Thus, we can expect this race to occur between then with more market share gobbled up.

What are the two companies? They are:

That is all folks.

Here is a chart from the pervious article that clearly shows what is taking place. Notice how the Americans are absent (as are the Japanese).

Notice how the only time we see any of the legacy American companies is the GM-SAIC partnership. For those who are unaware, that is a very inexpensive vehicle that is only sold in China. They sell a ton of them because they are glorified golf carts, coming in under $5K. They will not be sold outside the country since they would never pass other nations vehicle safety tests.

The other legacy automaker we see doing well is VW and its family of companies. They were able to tap into the Chinese market, which accounts for most of their EV sales. While this is of benefit, the Chinese counterparts are starting to gear up. That already put a bit of a hit of late on their results there.

To make matters worse for VW, the company recently had an emergency meeting after learning how long it takes Tesla to produce a vehicle compared to them. For Tesla, the production time, start to finish, is 1/3 that of VW.

Another factor to bear in mind is the EV growth rates are taking place in spite of massive declines in the overall automobile market. We are seeing some big drops in the largest markets, with China, as an example, down 4 straight months of double digit decline.

The Joke Of The American Automakers

Decades ago, the Japanese entered the United States automobile market with low-end, inexpensive cars. To be blunt, they sold these pieces of junk at low prices and were laughed at by the industry. The American companies were not worried about the new entrants, since the low end market was not a money maker. Hence, the belief was the Japanese were going to lose their shirts.

That did not happen. Over the next few years, quality improved and the Japanese figured out how to make money in that segment. As the 1980s progressed, they started to move up the scale, entering the medium sized car market. All the while, the United States automakers ignored the threat.

We all know how that turned out. We see history repeating itself. Over the next few years, there will be an invasion into the second largest car market by the Chinese. Tesla is already here but that is all.

Many espouse the idea of competition for Tesla. Sure it is coming but not from the legacy automakers. Let us look at the numbers.

General Motors is on record as saying they are going to produce 1 million EVS by 2025 or 2026. To get there, the company is going to invest $35 billion. How will this compare to the global EV market by that time.

Let us put together a rough estimate of the growth rate:

Keep in mind, these are likely conservative. Yet, by the time the market is 30-40 million, GM's goal is to get 1 million. Naturally, we have to keep in mind the growth rate is going to come at the expense of ICE sales. This means, while GM is trying to get into the game, their existing customers are going to be poached.

Ford is much worse. It already stated that it is going to up its F-150 Lightning product from 40K to 80K in 2024. By that time, Tesla will likely be knocking out at least 500K Cybertrucks and start ups like Rivian will be producing a couple hundred thousand.

The company does have its Mach-E Mustang. Unfortunately, production there is pitiful.

Mach-Es Vs Mustangs: Ford produced fewer Mustang Mach-Es during the month. The company said it made 3,790 Mach-Es in October, a drop of 29.7% on a month-on-month basis, its lowest so far this year.

According to this same article, the company sold a little over 21K of these cars this year. That is an insignificant amount considering the total the industry is already seeing.

If you never saw it before, his is what disruption looks like. Here we have, right before our eyes, an entire industry being upended. By now, we can start to proclaim the "Nokia moment" is in effect. The legacy automakers are going to see more of their sales disappearing simply as the EVs gobble up a larger portion of the market.

We will keep an eye on VW since they are the only one on the radar. As for Ford, GM, Honda, Toyota, and whatever Chrysler is now named, they are missing in action.

Sorry gang but in the world of technology, falling behind is not a temporary condition.

The legacy automakers are done. We can give it 2-3 years and them people will have the "Retail Apocalypse" moment. It is hard to see at first but then it becomes glaring.

Start the countdown until the US government has to bail out General Motors....again.

I think electric cars are not yet enough advanced for true mass adoption. They are not even environmentally OK. They are hyped by the climate religion, but from where the electric power should come if all people drive e-cars? The grids are even now near their capacity - and nobody is investing in the infrastructure! At least in Europe the danger of a black out should be more concerning than pollution from fossile fuel cars.

The grids are even now near their capacity - and nobody is investing in the infrastructure!

The US just passed a bill that is investing tens of billions into upgrading the grid, so I wouldnt say nobody is investing in it.

As for the Eurozone, that is true the move to renewables so quickly is causing an energy shortage. Of course, this is a wake up call since they are having to power up coal plants to make up for the shortage. China recently kicked their import of coal into high gear too. So people are starting to realize how much more energy we require and how much the grids are in need of upgrading.

I don't think the legacy automakers will be dead for a while. Far to many resources behind them to go down quietly against the likes of Tesla

They have resources although the debt loads of some of the companies are overwhelming. Look at the balance sheets of GM and Ford. They have enormous debt loads.

I didn't realize the part about the American makers ignoring the Japanese automakers but I definitely would pick a Toyota car over something from an American maker. It just seems cheap enough and quality-wise, its just about the same.

As for China and Tesla, I agree these are the only companies right now with actual EV lineups that can sell. With all the hype about NIO, I thought it would be on the list of top 10 though.

I think we have to think and develop more and more
Electric cars is not practical in many regions in the world .

Now's a good time to get into collecting "classic cars", as anything that runs on gas will be just for show before we know it.

It will be a while before they are phased out. There are 2 billions vehicles around the world, the majority on gas/diesel. It will take decades to replace all of them.

Yeah, but regarding new cars built, the last few ICE models that roll off the line will close out an era. Seems that would make them collectibles at some point down the road, especially after everything is electric and self driving, and the grid goes down for a week.