Why The Fed Can't Win The Battle For Inflation

taskmaster4450le in LeoFinance • 2 months ago

They try and try and try. You have to give them credit for persistence.

The United States Federal Reserve is desperate for inflation. It has a mandate from Congress of 2%. The problem is they have not been able to hit it in spite of global money printing that took place since the Great Recession.

Here is a 40 year chart of the United States inflation rate. You will notice that during the last decade (2019-2019), the Fed was NOT able to hit their mandated target in 6 our of the 10 years.

You will also notice that, on average, the rate of inflation is lower each decade as compared to the previous one. We will discuss this in a bit.

This was in spite of money printing all over the world.

The first chart is what the major Central Banks did. 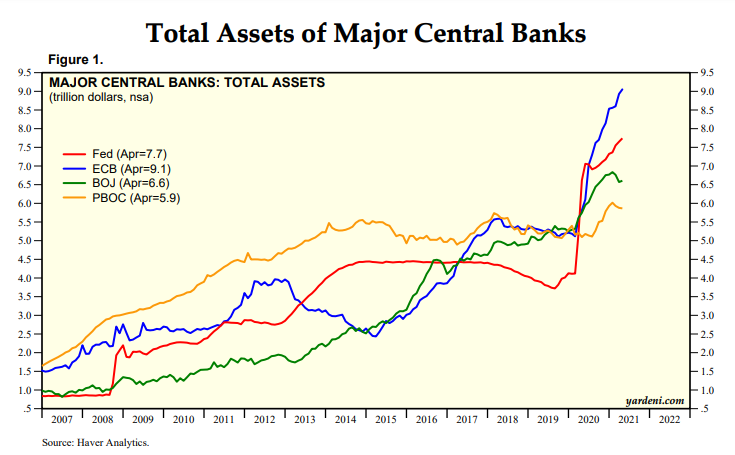 And this is them in total. On a global scale, we see a similar situation as the United States with regards to inflation. 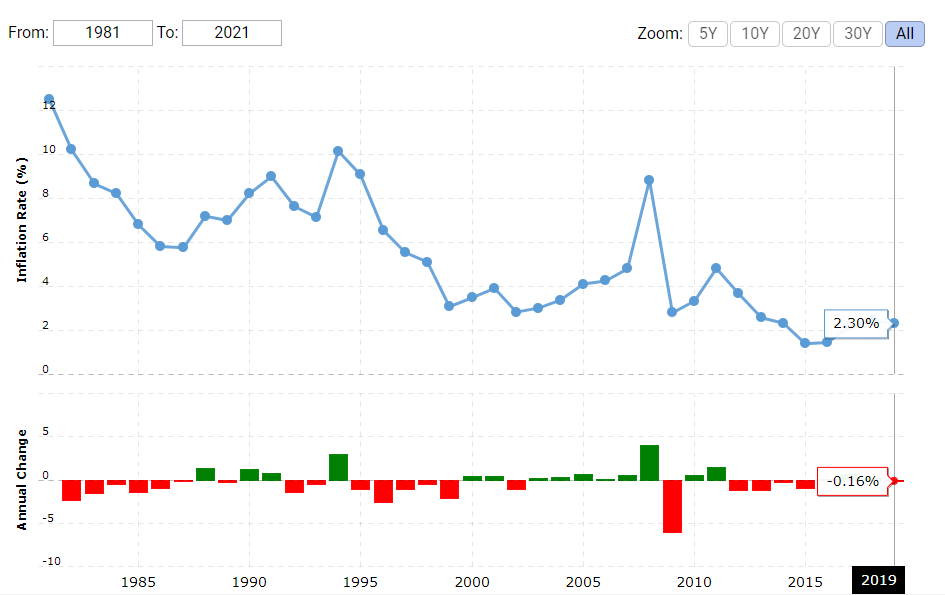 What the heck is going on here? How can the last decade have seen money printing around the globe, to the tune of about $23 trillion in the 2010s, and yet inflation in both the United States and global was flat or falling?

The reason being is that money printing, on its own, does not lead to inflation. This is a old wive's tale told by economists at esteemed institutions such as Harvard or Yale (the same ones who are attacking Bitcoin). These are individuals who never ran a business or had to meet a payroll in the private sector. Economics is an academic exercise.

Nevertheless, people still hold onto the Keynesian model believing that money printing will lead to FOMO, resulting in too much money chasing too few goods and services.

Inflationist are always screaming that we are going to see out of control inflation. They always point to the money printing, which has gone on for 4 decades by the way, as the impending cause. Yet in spite of racking up $28 trillion in deficit spending and other debt in the U.S. alone, we see inflation rates going down.

But wait, inflation is going through the roof. Look at what is taking place now. That shows that money printing is leading to inflation.

Wrong. Let us look at what is happening.

Since the end of the last US chart, which went through 2019, we can see that inflation did spike. Of course, this is after a massive drop due to COVID-19 and the shutting down of the economy. This caused supply chain issues from commodities to food to finish products. Hence, we are seeing prices rise not due to the amount of money that is out there but, rather, the supply. It isn't too much money chasing appliances that is causing the 2-3 month delay but the fact there are few available.

Which brings us to the point of the article. The reason why the Fed, or any other Central Bank, will never keep up with their quest for inflation is because of technology. Few, if any are going to argue that we are in an era of technological advancement. This creates a monetary problem because technology is not inflationary but, rather, deflationary.

And we are not talking a bit of deflation either. Whereas these charts show rate of 2%-6%, the technological deflation rates of Information Technology is around 33% and climbing.

The challenge is that we are seeing this make up a larger part of the global and, especially, the United States economy. As this keeps growing, all Central Banks are going to see this deepen.

Of course, they are not aware of this or the Fed would not have decided to keep its Security sale in the Repo market that took place last week. Nevertheless, the Fed believes that its money printing is the cause of inflation hence if they start tightening, it will disappear. They do not realize they have lost all control of the economy (if they ever had it).

The reason why the above charts show both the global and U.S. inflation rates heading down over the last few decades is because each is implementing more technology. Presently, about 4% of the global economy and 8% of the U.S. economy falls under I.T. This does not include the side benefits enjoys from the drop in computing or improvements in software.

A cold hard fact is that these percentages are only going to grow. We are moving deeper into a digitized arena. More of our world is being consumed by this meaning the pressures will only keep increasing. Thus, the Central Banks not only will have to keep printing, they are going to have to keep increasing the amount printed. The impact of technology on the economy is not going to slow down.

Remember this each time you come across an article about another breakthrough in AI, robotics, 3-D printing, and renewable energy. Also, keep in mind that three major areas are primed for disruption: upper education, construction, and healthcare. These are fields that are still fairly archaic in how they do things. We are already seeing technologies being developed that will massively alter how these fields operate. Of course, they will come complete with the same deflationary pressures we saw elsewhere in the economy.

The Fed and other Central Banks are desperate for inflation because they are fighting a deflationary spiral. The force that is coming down upon them is incredible. Of course, they are still trying to operate from the same old playbook of the past. This is not going to work. Each time the Fed tries to tighten they run into the same problem.

And it is a problem that is not going away. In fact, it is only going to get worse for them.

The ECB total assets seem to be skyrocketing like crazy too. I think watching to see what happens to them will let us know what will happen in the US.

Yeah that is the misnomer. Everyone focuses upon the Fed but it is the ECB that is far outpacing them with the run up of the balance sheet.

You are right, I fail to see how they are going to get it with the liquidity crisis in the USD. There is simply too much demand for it. Most do not look at things global. The USD is sough in many parts of the world.

Your concept of inflation is flawed.

Ah yes but this largely applies to the US and perhaps other developed countries.

In Nigeria we're experiencing wicked inflation that looks certain to rise. Our currency is losing against the dollar and is on a downward spiral to Oblivion. Venezuela 2.0 shit going on here, just that ours is taking a slow burner approach.

Yes that is true. But that all starts with the lack of confidence in the government and the presumption (usually rightly so) that they will screw things up even more. In a smaller economy like the ones you mentioned, that loss of confidence ends up in the economy in an overriding way. Hence, the solution by the bankers is to overprint when there is massively declining productivity.

It is a situation we saw repeated on a lot of occasions.

I've always been wondering about that and this articles explains it very well. Everyone streams inflation and it never came, until recently when some product prices started going through the roof but that's not inflation its a supply issue.

I'm curious how long it will take things to start to come down. I've been seeing 3d printing of housing starting to take off and from the looks of it it's mostly concrete.

My guess is we can see a commodity run for a couple years. Historically, it takes 18-24 months for a commodity to alter its supply. Just like we were talking about the glut of oil 18 months ago, now we have the opposite problem arising as rig counts were shut down, frackers went bankrupt, pipelines stalled, and tension in the Middle East.

I would say those who play commodities might have a bull for a couple years. I would watch out for the ones that are really extended like lumber, steel, and iron ore.

What happened at the beginning of the first chart? that drop looks massive

That was the early 1980s when inflation was wild due to the stagflation of the 1970s, mostly caused by the oil embargo against the US. Paul Vocker, the Fed chair at the time, stepped on the throat of the economy by sending interest rates way up. That killed the inflation and sent it plummeting but also did the same thing to the economy. Inflation is something Central Banks can combat rather easily. The cost is the economy for a while.

Back then there wasnt the ability to navigate around it since technology not much of an impact. When we look at the ability today, if a price of something remains high for too long, we will usually see that offset by new technologies that address the problem. That is why commodities are on an 18-24 months supply cycle. If it extends much past there, on the high price side, alternatives will be developed that smash the price. We saw this with oil after 2008 and 2012-2014 when technology (horizontal drilling) increased the global supply a great deal.

Thanks for the lengthy reply :)

The European central bank does the same. But if money is worthless %2 every year, why isn't the minimum wage increased. Or is it oranges and bananes here?

Wages are another factor for long term inflation and that is another piece of the puzzle that was missing. We have not seen across the board wage growth for two decades. My forecast is we will not see it long term either with automation ceasing to be a threat and actually becoming a reality.

Those with wage growth do not feel the impact of rising prices. Of course, those with a mortgage and car payment do not either since they payments are fixed.

Wages are another factor for long term inflation and that is another piece of the puzzle that was missing. We have not seen across the board wage growth for two decades. [...] Those with wage growth do not feel the impact of rising prices. Of course, those with a mortgage and car payment do not either since they payments are fixed.

More less that is point. Sorry, I know progress is slow. Next thing is people with a wage income have on avagerage not time or simple are to far away from any economic focus.
My family is not that wealth on income. None of them are talking about what happend to their income value and how to deal with inflation.
I hate my ivory tower.