Is cinetv.io the new "leofinance"?

trumpman in LeoFinance • 3 months ago (edited)

I am sure many of you hate yourself for not investing early on in leofinance when 1 Leo was 1 cent. Well, first let me tell you that I told ya a million times back then but you didn't listen...lol.. Anyways!

Today I want to shill you another unpolished hive engine token. A token and a tribe that is in a very similar situation like Leo was in its early stages. Meaning it has plenty of potential but atm few know and few give a shit about.

The tribe I'm talking about is cinetv.io and it is a tribe focused on movies, TV series and shit like that.

Like Leo in its early stages, the price of the token is very cheap and it is actually possible to become a dolphin or even a whale simply by posting since the competition for the rewards is very small... For now ;-)

But why do I think it's going to be the next big thing on hive?

For starters, the people behind cinetv.io have a proven track record. Cinetv.io is the child of the Mancave community here on hive. The token of the community (BRO) has been one of the most successful on hive engine, having appreciated more than three times its value since it's inception. Not to mention the super generous and DAILY dividends it's holders get paid.

Other than the proven track history, according to the official announcements, cinetv.io will soon have two features that no other tribe has. Except for leo of course. Another thing I like about cinetv.io is that the topic is something super easy for everyone to participate, unlike LEOFINANCE where many users complain they have a hard time to post related content.

After all, everybody watches movies and series and can share their thoughts about them!

So, all in all I think cinetv has a very bright future if the people behind it play their cards well.

Since the initial tokens were airdropped to LEO and BRO holders I was lucky enough to start with a relatively big stake on the tribe from day zero, so I won't be buying any. But as you can see from my content in the past few days, I am trying to get some for free from my post rewards now that the competition is still small.

Maybe you want to do the same, or even buy a big stack while CINE is still cheap. As always this is not financial advice. I am just a monkey hitting buttons on a keyboard!

You've made a compelling argument. I made a purchase and will get started. Writing STEM articles can get really old, but watching TV and movies won't get old as my kids grow up.

Damn, you pumped it too much 😂

I'm...I'm so sorry! I couldn't help the purchase. Honestly, I kind of feel like it's your fault, lol. You wrote very well and BRO's announcement was pretty straightforward. If they have taskmaster's support that's also a great thing too.

I've been looking at the mancave and bro's performance for some time. It certainly outside of my price range. I happened on to CINE but didn't know much about it outside of LeoDex. I read about BRO hinting at something regarding movies and TV, but it wasn't until your article that I found the readings I was looking for in terms of the announcement and official website.

I felt like if I didn't make the purchase I might miss out. The postings on that site are legit reviews and personnel experiences related to movies and TV. It reminds me of the way the more successful posts are structured in LeoFinance and STEM tribes.

I never expected anyone to fomo that hard 😂 Never buy the whole order book lol, especially on he where it's quite thin and price can fluctuate so easy !

LOL, I FOMO'd like the best, unfortunately in this case.

It certainly has good potential, the interest from users is considerable and I am sure that a new UI and some news will have a positive effect on the price of the token!

I accumulate and I created a dedicated account @claudio83.cine, I recently reached 1000 Cine Power ✌️

Great! thanks for your support to my reviews ❤️

Well it's not like there's lots of stuff to support .. yet 😂

written like this, it is not a compliment to me ;P

Do you know if German Reviews are welcome? I actually talk a lot about the latest stuff I watch and I was really lucky to be early in POB, so I am kind of eager to grab some CINE.

Cinetv certainly has potential. The topic is good and if the tribe manages to provide more information beyond the forum, it can become something big.

By additional information I mean all kinds of data about new movies. Like IMBD and Rotten Tomatoes.

Great advice. Why would people not want free money? I'm getting ready to write another cineTV.io post.

Let me know when you do 😍

I might try to post some documentaries reviews on CINE, I don't want to miss this train as well :)

Thanks for sharing this info, cinetv.io looks like an exciting new tribe.

I mean who doesn't love TV series and Movies right?

I love discussing all the latest releases with family but cinetv.io seems like a fun new tribe to share with.

Thank you for the heads up, I will be checking that out A.S.A.P

Managed to finally get my first post on cinetv, had some difficulty finding cinetv in the brave browser had to extend the link from cinetv.io to http://www.cinetv.io.

I found it straight away for my phone no problem but I still haven't been able to sign in using my laptop, I can't figure out what the issue is as its the same account on my phone, I'm bafulled Lol, however I created a work around.

I wasn't up to writing an article on my phone so I wrote it on my laptop and saved a version to my protonmail account and then transferred it to my phone and publishd it from there using my phone to cinetv.io

I couldn't log into cinetv.io on my laptop to find the link I had to put it in a draft email and transfer to my computer, here it is if you are interested https://www.cinetv.io/undefined/@jaxsonmurph/exciting-new-tribe-for-tv-and-film-buffs-on-the-hive-blockchain-civetv-io

Thanks for the heads up and interest.

I think I got about 80 cine from the airdrop and I actually staked it, I don't know how much it's currently worth, but I think I know your cine account. Thanks for shilling, I'll begin posting on the front-end

Would be coming right up tomorrow

it honestly has potential and judging by the great entertainment market for sure you have to keep an eye on that, it can and in the not too distant future be something really good!

Another thing I like about cinetv.io is that the topic is something super easy for everyone to participate, unlike LEOFINANCE where many users complain they have a hard time to post related content. After all, everybody watches movies and series and can share their thoughts about them!

I'm the exact opposite. I do understand now why aren't you that active on Leofinance anymore. You have the nose for promising projects, that's for sure.

Well I am generally not very active, my one month old baby keeps me busy 😂

I am a bit too busy over at LEO so I haven't really had time to check it out. I know taskmaster4450 promote it and he is also curating that community.

I remember a few weeks back when it was launched. It's definitely a good one with a lot of potential. I wish the day would have 48 hours, only for me so I could do everything I am planning 😊

Yeah! So many cool tribes , too little time 😭

loving the ui already. well, have quite looked into it yet. thanks for your review. should be getting more if it's token before the pump comes

these are some cool ideas, ill forward them!

Mate, don't give up on LeoFinance now.

Did you see that your CumRocket on the Bill Maher Show post had this week's 2nd highest Google traffic to the leofinance.io domain?

Check out the screenshot from Leo's Simple Analytics page below. 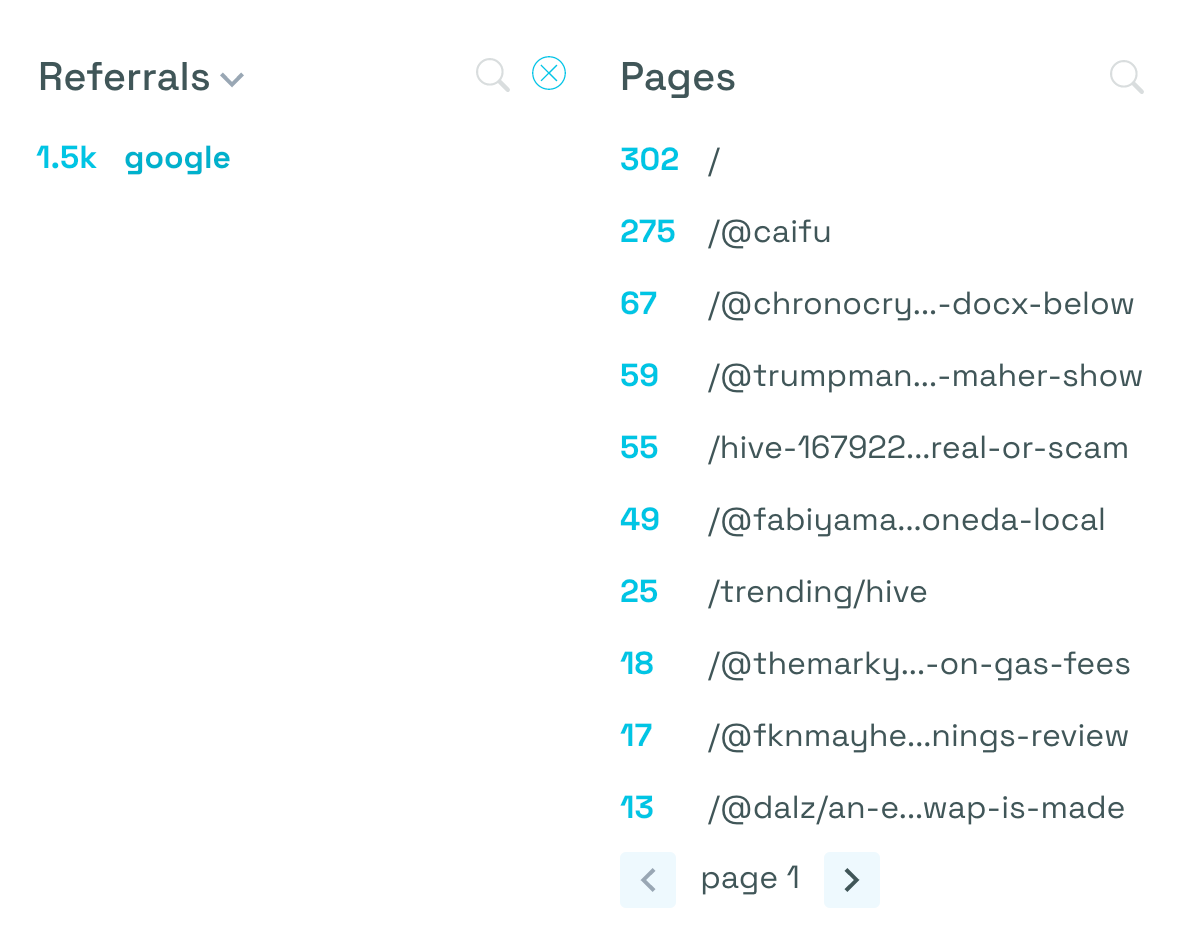 lol, not giving up XD just mixing things up a bit ^_^

What an amazing time to be @trumpman's friend.

It will end up to a full-time job to track all tribes :O

And it can change everything so fast if light wallets happen and RC delegation. At this point it would become 1000x more painful to track at time :)

Thanks to be the inside man!!

It will end up to a full-time job to track all tribes :O

Cine is likely to evolve as in the cases of LEO and POB. I appreciate the niche concept of the project. Worth appreciating ^^

I powered mine up, but I just don't watch any tv or movies.

Stop making me fomo for some weeks now. I'm in diamond paws

was there an airdrop... I didn't know. no wonder you said if I want to make a movie review, I should do it through cinetv.io..... great, this means I would start making movie reviews very well infact I watched a movie today that almost made me cry, would be great to share something about it.

Thanks for alerting me to that one! I'll be sure to check them out :).

Thanks for the info. Time to make these movies pay!

As a big time film buff this looks very interesting. Thanks for the heads up Trumpman!

Good analysis.. I think the whole social media thing is coming alive on hive and anyone will be able to fit in the nearest. This is another step towards greatness on the hive blockchain

This is very interesting. I'll take a look at it and see if you can get some tokens to take advantage of.

Awesome! Shoot a comment when you give it a try!

I always trust tokens you shill and guess what let me look at it and get posting there as I have a spare alt account @jarautravels that has been inactive for a while.

Let me know if/when you give it a try!

Thanks for the tip colleague, I will take a look at it immediately because I am looking for projects to invest in.

Last night as soon as I read your article I bought CINE tokens mate hahaha. I will leave my small investment there for many months to come.

I only wrote one post in that community so far, but I really like the concept behind it so I'm planning on being more active there soon.

Buying some of it now. I'll just focus on jerking posts then.

I will definitely buy a few thousand of these coins when I sell BROS coins by the same author). My BROS dream of becoming CINE, do you hear @brofund?)

This community looks like tailor-made for my reviews, and getting few extra tokens is added bonus. :) 24 hours trading volume looks relatively promising.