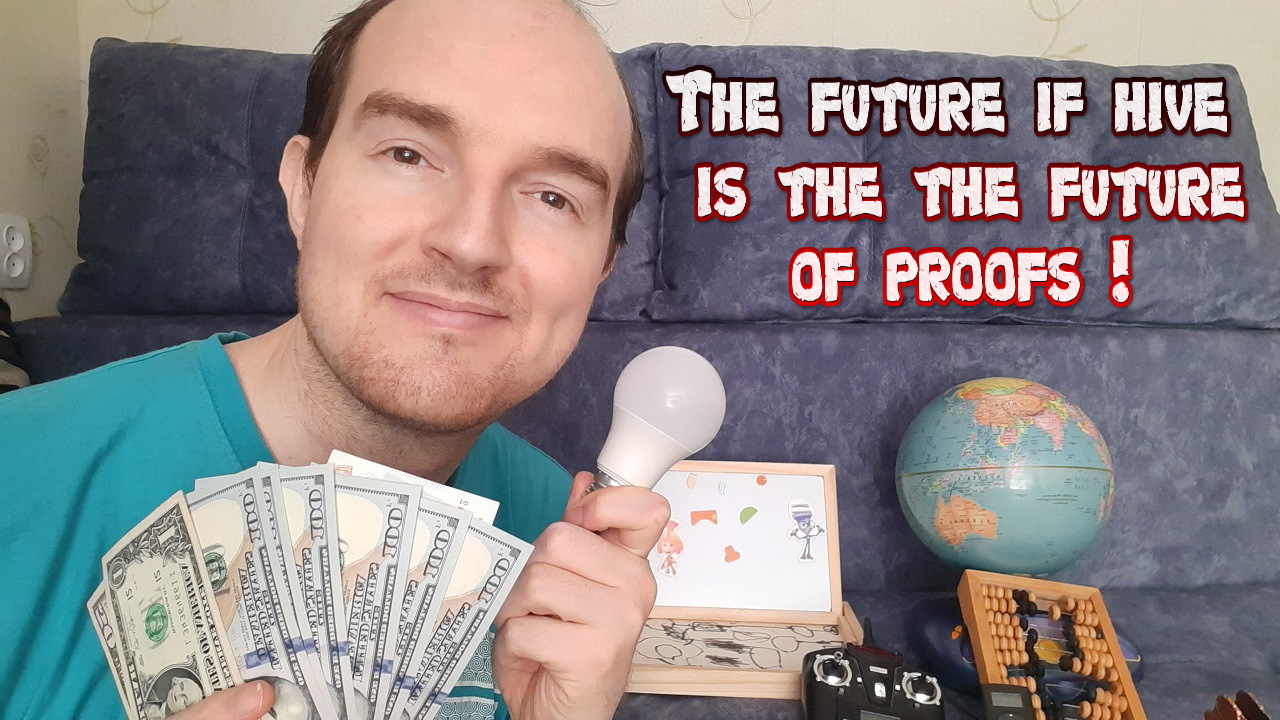 In this video I talked about the future of hive and exposed a few proofs, I see them playing a big role in that.

It seems finding proofs in hive became one of my hobbies. ☺

Enjoy watching the video. I did my best to make it fun to watch.

Smth, what really matters is Proof of STAKE. Everything else is just vaporware, BS.

That's why I started to talk about it the first. It's leading in all communities and tribes.

Thanks for sharing @clixmoney It was a fun and entertaining video. I enjoyed it.

You've explained a lot of questions I had about Hive. I don't want to participate in a blockchain though, I still don't understand a lot about Hive, I can't use LeoFinance either but signed up via Ecency and keep using this "community" or whatever these two are.
Sadly all the directions given to beginners are too confusing and boring to read and make very little sense to anyone that just begins. This goes for both this platform and Steemit which I first used in 2017 and quickly abandoned.
Moreover, I've noticed the most powerful those with the most hive power, abusing everything, with the creation of new accounts and feeding them with unfair votes. Sadly this creates an additional unfair advantage to those that have enough power to exploit the platform. This is something similar to abuse of leadership many top corporations are practicing and except for being unfair is also dishonest and destroys any healthy competition. Eventually, this destroys also this platform.
When we are talking about free markets, some institutions protect these freedoms from those powerful enough to exploit the weak and vulnerable. There would have been no innovation at all and only monopolized markets otherwise.
This is what I noticed in my one month or so inside hive, and in my two previous experiences in Steemit (2017 and 2021). I can try and gain more power but I won't exploit this to my advantage, by creation of bot accounts and bot votes that would give me an unfair edge against any other fair content creator.
I can't do what these guy do, create dozens of accounts that post an image from Google and write two sentences below and with a chain voting system abuse the rules and create powerful accounts.
I mean this is not only dishonest, it disgusts me each time I see one of these posts, and it is not just a small amount. Meanwhile I wrote this before, I create content in Read Cash and Medium.
Why should I create new content for Hive instead since I will not get anyone reading it? I tried once or twice and was completely ignored.
So I'm just republishing my work here. I have no reason to create an original or exclussive post for Hive and have it burried. Because this is how it will be. Where we post our article first stays with google. If I post it here, it will be forever buried and anywhere republished it will be secondary option for anyone to find.
See there is a lot to think about and this is apparently not just me but too many that are thinking of joining, or have tried out and were all completely confused with this system that clearly favors the powerful, and clearly allows them to abuse this power.

I guess you don't know that much about tribes. Every tribe has its own curation system, every tribe has its own whales. Every tribe has special content they support more. And the governance is unique for each tribe. For example leofinance and proofofbrain don't work the same. They don't have the same trading page as well. I build @dcooperation to support hive members who need support. As I told in the video in case you watched it, I don't have time for drama. I have time to build, to improve things. That's why I created : Collaborative curation. I waste time on solutions instead of just complaining. #dcc is a good solution and all the idea of @dcooperation community. Our goal is to support collaborations. We started in hive because we have so many people supporting each other here. I know you are doing well in read.cash, but that's because you have a friend there who's supporting you. I wrote there a few nice articles, I started even by exeptional content, but I didn't see the support there. Anyway on hive I've been creating more than 4 years. I know many people here and they know me. I'm a builder. I'm looking got builders who build with me. Nothing is perfect in this world. Read.cash isn't perfect as well. And many other platforms. LBRY for example deleted all my content. Other platforms I don't want to mention allow some people to share youtube links that aren't original work, while they downvote those who don't have the right to do so. In noise I eanred about $10 a month what I can earn in hive in one day. In hive we have so many tribes. In POB for example I was doing sometimes about $30 per one post. Not all of them do well, but still. In leofinance as well I earned till $15 per post. Some people do there more. There are many opportunities we may use here. It depends on what we want. If we want to complain we will always find things to cry about, if we want to find opportunities, we will do everything to find only opportunities. Hive-engine is a big opportunity. I created myseld there a token called DCC and you may check the white paper here : DCcoin is created ! The total is 1 million !. As well look at the hard work we did in more than 3 years with @dcooperation community : DCC airdrop - Collaborate and earn !. Now I'm plaining to create a movie about hive. Even the scenario is ready. You can check it here : The scenario of hive documentary movie !
. Check what @nathanmars is doing in twitter and how they are promoting hive with @freecrypto

Anyway, if you don't like it in hive, why you are still here ? Why you care ? I think that's because you are attached to the community. I don't think that this is your main account since it's created in 2021. Can you write the same from your main account ?

If you are talking about Marc, he doesn't only support me but most content creators. However, this is obvious that I'm not just doing good only in Read Cash. I joined Medium one month ago and immediately my articles started enjoying high numbers. One month later I am making 500 views daily. There is certainly a big problem in Hive and it is exactly as I explained it. If you think this was just complaining then this is wrong perception.
It is how I see Hive after two months here. When compared to Medium or Read Cash, this platform has no future.

Hive people have enough experience to support the most loyal members here. It's not about how many views you have, how awesome is your writing, how popular you are in other social media. It's about the community. If you are bringing value to the community, you will be rewarded enough. But being here only 2 months and saying that much about it doesn't look that valuable. Just avoid drama, be in touch with people, create great content, build something here or help others building and everything will be ok. And of course stakeholders should be respected. Some of them earned that by hard work, some invested their own money. Even those who get that from the old mining thing of steem did enough to keep their stake, they didn't just withdraw it, but left everything here to keep building their accounts, reputations and influence. I don't know a lot about read cash and how it works, but being that supported there doesn't mean that you will be supported forever. I even have a little problem now with noise, I keep earning, but nothing is sent to my account. Something like that can happen anytime with other websites. You can't imagine how much of them I tried. But I never had such problem in hive.

I think to be sure of a platform, we should look at the long term of it. We can't say our opinion about using a platform for a few months. In that time so many websites turned to scam.

So, in my opinion if someone keep creating in a platform, it's better to help it to improve, to do what's possible. Otherwise wasting time in it and being negative and spoiling the mind of others is just a waste of time.

It validates what I said above. This is not about creating content, it is about becoming more powerful. Anyway, if this is a negative talk, I stop, but had to engage and explain how it felt. There is no bias in my opinion and I didn't write anything to make you feel bad. It was me feeling bad so far and wanted to express it. Maybe two months time is not enough, I will keep using Hive and we will see, maybe after a year, I will have actual people reading my articles and better interaction with this community, so I'm going to wait and if something changes I may start writing exclussive content for Hive again (tried that before when I started).

Waiting is not enough. You should be active yourself. How people will find about you if you are not finding them yourself ? Building an audiance is a tough work. You are lucky you have a supporter in read you may found that fast. But in every platform we have the same chance to be found by the right people or not. It always depends on our activity. And I didn't say that's all about the power. It's about a lot of things. I wish you watched my video to learn from my 4 years experience being with this community every single day ! You may add to all that, the proof of learning. I'm still learning and we have many people learning here everyday. How to act, how to be successful, how to create better content, how to be found, the best communities and tribes to create in. Etc. I'm doing the same in noise to be seen somehow. I'm trying to create in as many chambers as I can. That's how I get more than 50 followers in about 2 months. You can explore our communities yourself : https://hive.blog/communities . There are a lot of them.

As well it's not about what the platform is doing to you, but what about you are doing to the platform. Bring value = get value !