Hivecommerce Token COM Update for May 2021

Hello everyone! So we are already into May, yes, we are running a bit late on this update, but hey, we have been busy, lol.

So the first month of daily payouts from staking the COM token is in the books and has been very successful! No hiccups with any of the payouts so far!

So daily, we are paying out 4 tokens that are all involved in ecommerce on the Hive blockchain, or hivecommerce as we like to call it.

What we are doing is taking all of the rewards we collect over the month and we take the total in the wallet for each coin and divide that number by 2. Now we started with a month ahead because we wanted to have a nice reserve going on incase of reward volatility, especially with DCity and the SIM token due to the insane tax amounts that are being charged, and the fluctuation of it, because it moves daily. But we are taking half of the liquid tokens in the wallet and staking them or in the case of SIM, we are purchasing cards for the city.

The rest of the tokens stay in the wallet for the daily payouts. After the end of the quarter, which will be at the end of June, we will then take the remaining half after staking, divide that by 2, so we keep a reserve, divide that number by 30 and recalculate the daily rewards amount.

Here is the breakdown of the daily payout pool for each token currently(based on the first month rewards after COM launch, March 2021):

Again, these amounts will change at the first of July to reflect the changes in the rewards. Now that we are focusing on bringing allot of ecommerce content to this account, we are going to be working on building the rewards wallet allot more! Before it was just based of passive and manual curation. It's time to step that game up and get to earning some rewards!

As far as any HIVE or HBD rewards are concerned, we are going to be working on powering up our HIVE and building the delegation to the @leo.voter account to keep accumulating LEO and we will also put some into the dlease.io market and try to delegate some to earn some liquid Hive to turn around and restake to keep building the account stake up!

The plan is hopefully, we can build up the LEO reserves and stake enough to possibly start adding it to the COM payouts starting in July! We just want to make sure we have enough built up in reserves to make payouts worth it.

In effort to continue to build content for the hivehustlers community, this will also hopefully earn HBD in the process, so we are looking to build those stacks by creating some awesome content and looking to build the reserves for HBD, which we might make a weekly or monthly payout kind of thing in SWAP.HBD.

So if you like making passive income from other people's efforts, we ask that you help us out by following the @hivehustlers account and checking out our posts and consider giving us a vote!

We also ask that you consider delegating Hive Power to the @hivehustlers account to help build our vote amount as well so we can go out and help share some love to the community! Delegating Hive Power also earns you some HUSTLERM and COM tokens DAILY!

Hope you all have a great weekend!

I did not understand well how to get passive income? stake Hivecommerce Token?

yes, you can read the white paper at https://hivecommerce.org

OK thank you. I will read it.

Thanks for the updates. I like the daily drips into my account. Sometimes I see a double drip for a token so is that an internal issue or was there a double payout?

Yeah that shouldn't happen... thanks for letting me know.

I attached a screenshot from a day or two ago where I got a double LIST payment. So maybe you can figure out from that. 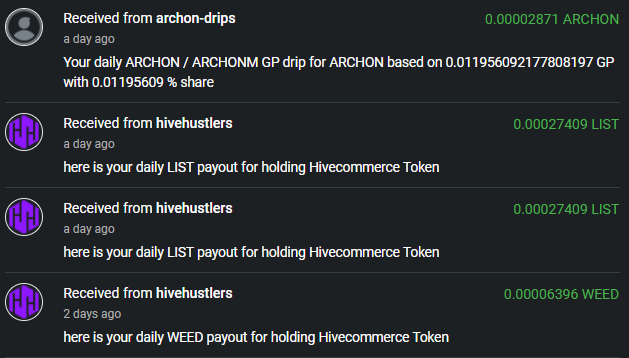 Congratulations @hivehustlers! You have completed the following achievement on the Hive blockchain and have been rewarded with new badge(s) :