leofinance in LeoFinance • 7 months ago

It's been a wild ride for LeoFinance, LEO and WLEO. We've done this all before as we created the first version of Wrapped LEO and launched it into the Universe. Now we're back with an improved model, a high degree of security and a much bigger community.

In some ways, WLEO 1 was a blessing in disguise. It allowed us some time to go back to the drawing board on a number of aspects related to LeoFinance and the LEO token economy. With the knowledge of what happens when a wrapped token is introduced coupled with a desire to relaunch in a highly secure and compatible way, we've finally brought back WLEO.

WLEO 2 marks an important milestone for our project. LeoFinance is a cross-blockchain social platform. We're built using the most powerful aspects of Hive: fast, scalable and free transactions. Our platform bridges the gap to other blockchains by reaching out with projects like the LeoInfra Metamask integrations (allowing Metamask users to signup to LeoFinance/Hive in less than 30 seconds) along with vital aspects of our economy like Wrapped LEO (WLEO).

In this roundtable, we meet once again to launch Wrapped LEO. This time, we've got a lot of new changes under the hood and also a https://leofinance.io UI makeover. You may have already noticed the new wallet UI which enables LeoInfra cross-chain integrations.

These integrations allow you to seamlessly:

These features are still bundled under LeoInfra V1. As many of you know, we hid these wallet features after the attack on WLEO and they never got to go public (since they weren't finished with development prior to October 12th). They've finally made their way onto the production UI and as we move forward with other LeoInfra integrations (LeoInfra V2 launches in less than 10 days), we'll continue to expand our way into other platforms/blockchains.

Our main driver is more users and that is clear from every action we take. Whether its listing WLEO on Uniswap or finding a CEX to list our project or building a new feature into the UI. It's all about bringing the most value to our current userbase while expanding out in order to grow our core LeoFinance family.

In this episode of the LeoFinance podcast, we discuss the updates with WLEO, have our launch party shenanigans and also do live demos where we all wrap LEO and provide liquidity to the Uniswap pool. This episode will also be clipped up for specific tutorials on each aspect of wrapped LEO which will make it easier for current and future users to figure out how to wrap, swap and provide liquidity. 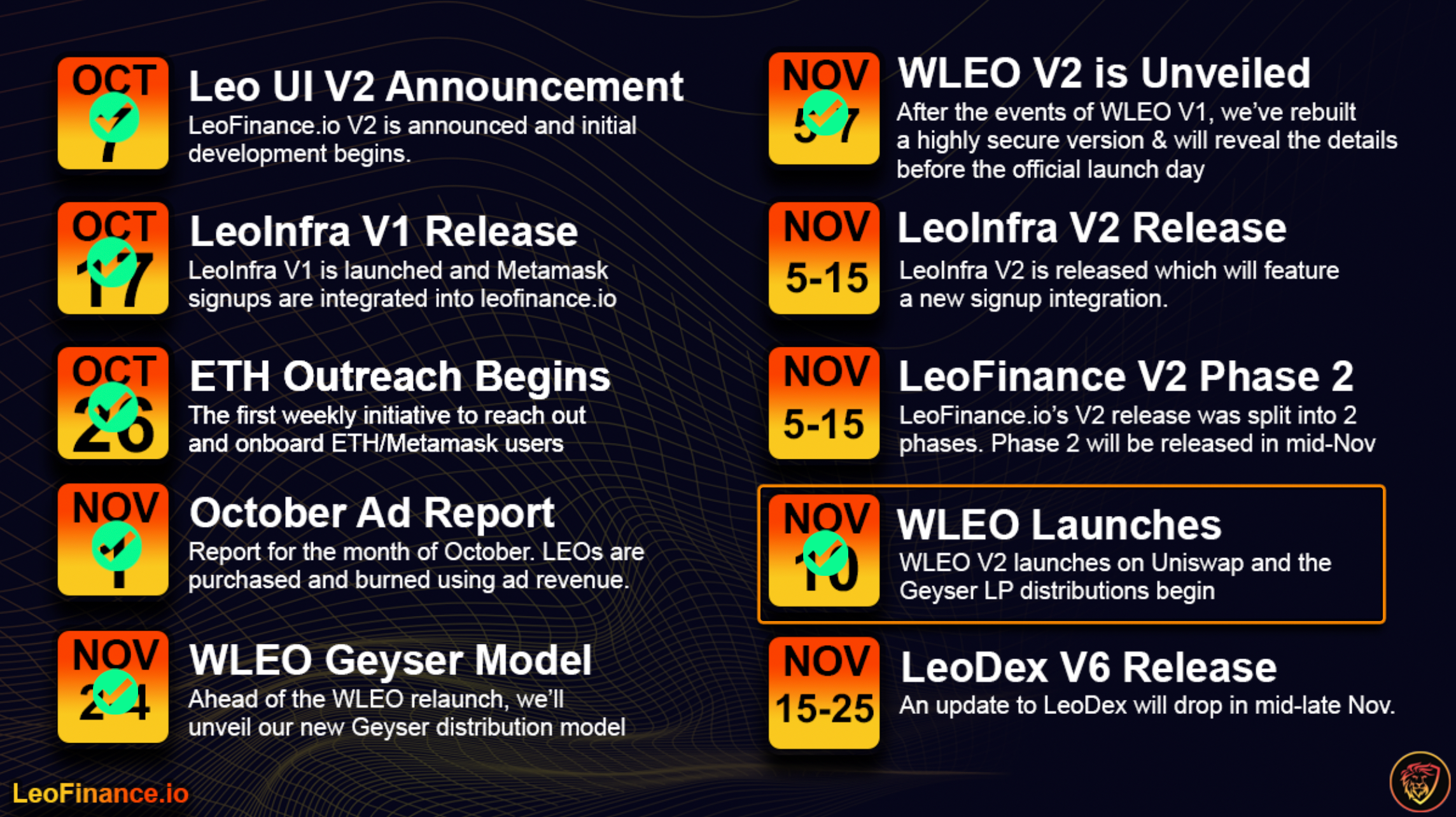 Our Roadmap is still roughly on target. We're delivering all of our updates by the end of the month and with the WLEO Relaunch today, we've now got only 3 items left to deliver:

We've already teased LeoInfra V2 here and there. We're integrating Twitter as the next major buildout under the LeoInfra banner. From there, we're going to launch a slew of marketing campaigns aimed at onboarding Metamask + Twitter users. The ability to onboard users through these two methods greatly expands our reach and the ease in which we can get a new user signed up. More details soon.

As we get closer to the official V2 P2 release date, you'll see more and more of the new features hit the live production UI for testing and feedback.

LeoFinance is a blockchain-based social media community for Crypto & Finance content creators. Our tokenized app allows users and creators to engage and share content on the blockchain while earning cryptocurrency rewards.

what about the old pool, is there a way to shut that down?

to my frustration it keeps showing in my pool and I still have 60 USD in there, lol
Or once something exists on UNI it stays there forever as a sad reminder of what once was?
It would be cool to get the 3 ETH in there and add that to the pool or geyser in a way 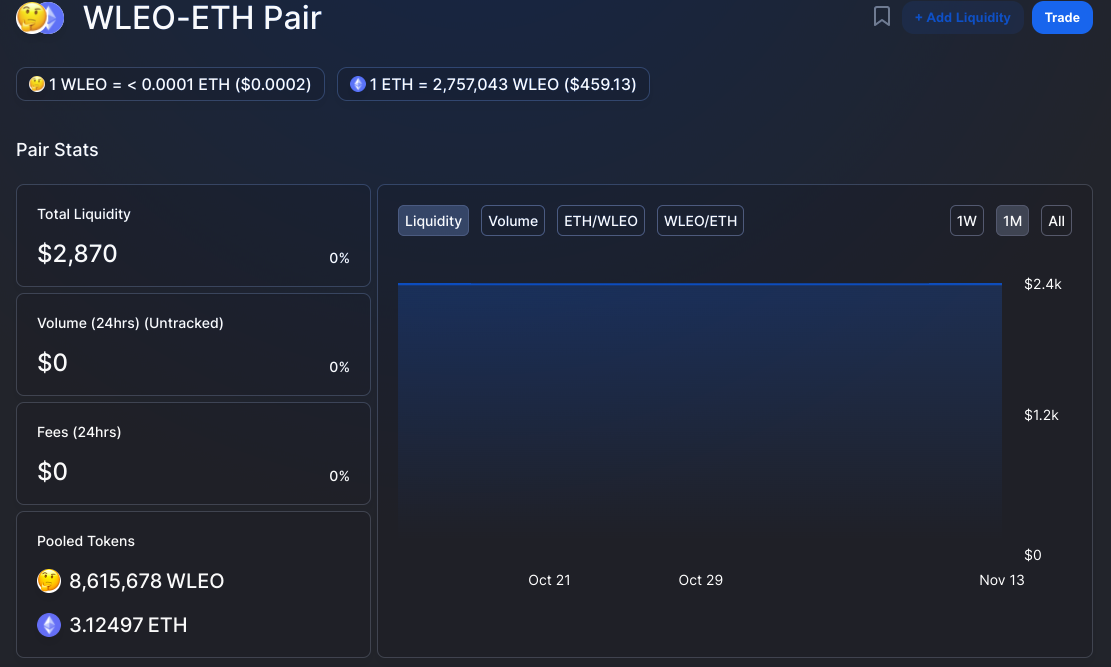 I added yesterday, seems I was the 2nd in the pool :-)

happy with that, already made 0.35 cents on trading fees on a 2k investment

Ohhhh.
This was fun to listen all. 😃

Due to network congestions my plan did not worked out 100%
Well, maybe 70%. Struggling with Metamask brought much sweat. Especially that My PC is run in Paranoid style, it keeps asking for my YUBIKEY all the time.
Finally, discovered how all can be done much much quicker and easier with SAFEPAL hardware wallet and its associated app., which has UNISWAP built in. Very much recomended.

All in all - it was worth to cancel all my other todays tasks, and wait just for this event.
I'm happy.

With Leo, the excitement never stops. Cheers to having wleo up and running again.

This is excellent for all of hive-engine I have already been noticing the changes made lately including vote power %, value of post/comment upvotes in USD and more.

Was unfortunate for the attack, but stopping it from getting to the public is a big plus and now as you said, it allowed to better improve the security and performance and everything included with relaunching wLEO, hopefully to make it come back even stronger!

Keep up the good work, because LeoFinance is already pretty solid and the constant improvements while the community constantly keeps at the growth of LEO, will see a smooth growth of the token price plus associated tokens and any new use cases you come up with.

Agreed @thegoliath. I was around in 2016 for the early days of steem and there was always talk of "developing initiatives" that never really came to fruition.

The leo project has pumped out more value add functionality for users in 1 year than just about anything else associated with the blockchain. Even with the hive fork occuring.

Being around since day 1 of LEO has been a much better experience.

Really nice to see step by step how the relaunch of WLEO started!!

But how many Brave windows have you opened ??? :) I would have missed it already lol

Hahah, you gotta be talking about Rolland. He had like 25 tabs open, crazyness!

Looks like I will have to listen to this later while I'm at work, sorry Peter Shiff and Greg Hunter!

This was the first time that I have provided liquidity on Uniswap, and the procedure was relatively easy... Only standard ETH fee issues (too high :P), Uniswap lag, but in general, most of the things went smooth...

And the video tutorial can help others, for sure!

Thanks for the welcome! Appreciate it! Let's make this thing even better!

We're baaaaaack! This was great that we're relaunched in such a short timeframe. Love that I could LP on air, let's let the Lion roar. Listened while making LEO Finance gifs and yacking with folks in the DISCORD. I love this video!

Sharing all the glitches (either operator error or discussing new ways to make it easier) people may experience while joining the wrapped LEO (wLEO) liquidity pool on Uniswap if they are using Metamask or a hard wallet like TREZOR and such.

It can only get better. We are growing on daily basis and the future looks much brighter for LeoFinance and other LEO projects.

This is a very good idea